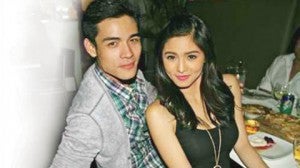 “It’s unfortunate that some people feel that way. I admit that everything has changed for me since I did the teleserye, but I really worked hard for it. I’m thankful to Kim’s supporters, but I think they were there for me, too. A fan group called KimXi was even formed because of our tandem,” said the 22-year-old actor.

appeared on “My Binondo Girl.” The latest is Globe’s Super Facebook (FB) package, exclusively for its prepaid subscribers.

In the now-defunct top-rated show on ABS-CBN, Xian portrayed the role of Andy Wu, a Chinese businessman who marries Kim’s character, Jade Dimaguiba, to help her reclaim the money her father took away. The two eventually fell in love.

“Kim and I are happy that we were able to inspire a lot of people with our work. They said they could relate to our characters,” Xian told movie scribes during a gathering hosted by Globe. The actor, however, denied he had a romantic relationship with Kim while working on the series.

“Walang ligawan,” Xian stressed, “although she knows that I’ll always be there for her. We’re good friends. We try to communicate as often as we can, in spite of the busy schedule we keep. Sadly, we only get to spend time together when there’s taping of a TV show or shooting of a film.”

From basketball to drama

Alexander Xian Lim Uy was born and raised in Daly City, California. When he first came to the Philippines, he played basketball with the University of the East Warriors, then landed a bit role in the 2008 drama series “Eva Fonda.” His first major acting role was in the TV adaptation of the film “Katorse,” in 2009. The following year, he appeared in the drama series “Rubi.”

“So far, I enjoy what I’m doing. In fact, the best thing about show biz is that you get to do different things every day, express yourself in so many different ways,” Xian said. “The downside is that you hardly get enough sleep, but this is manageable especially if you enjoy the company of the people you work with.”

Xian also said he didn’t mind the lost privacy he experiences as an actor. “I make people happy. I meet people who genuinely want to shake my hand—it’s all worth it for me.”

Xian said he considered social networking sites important for advancing an actor’s career. “They play a big factor, and not just in promotions. Through Facebook and Twitter, I also get to communicate with the fans. It’s my way of bonding with them, especially when I can’t be with them physically,” he explained. “Their comments help me improve as an actor. The downside is that there are posers. I have no problem with their posting my pictures on their accounts, but it’s tacky that some of them actually pretend to be me.”

Xian said he considered himself lucky that he hasn’t encountered any cyber bullies, unlike some of his colleagues in the biz. “I haven’t experienced an attack. But it’s easy to block these people. The comments I get deal mostly with my screen performances. I try to read them all, and if I have time, I reply. It’s the least I can do to thank my fans.”

Xian recently appeared in the romantic-comedy film “My Cactus Heart,” by director Enrico Santos. He will star in a youth-oriented film by Frasco Mortiz, entitled “The Reunion,” with Enchong Dee, Enrique Gil and Kean Cipriano.