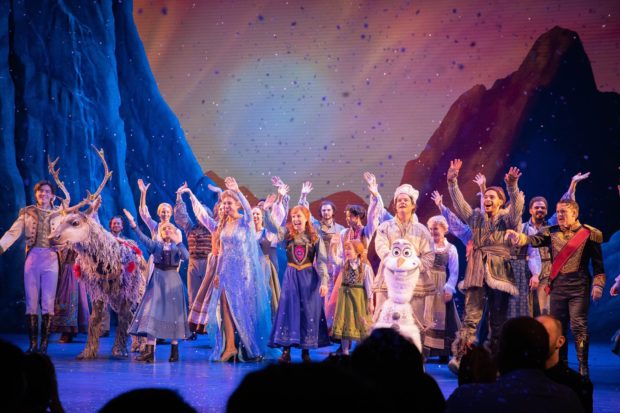 “Frozen” — based on Disney’s blockbuster hit movie — will not reopen on Broadway, the production said Thursday, marking the first musical to announce permanent cancellation due to the coronavirus pandemic.

The show had been performed 851 times since its May 2018 opening at New York’s St. James Theatre.

The musical’s staff is “heartbroken” over the closure, the production said on Twitter.

“Some people are worth melting for, and today our hearts melt with you,” the post said, in reference to the show’s snowy plot.

We are heartbroken to announce that Frozen will not reopen once Broadway returns. Thank you for the love and magic we've shared together during our incredible 851 performances at the St. James Theatre. Some people are worth melting for, and today our hearts melt with you. 💙 pic.twitter.com/uEvNYs2K92

According to Broadway World, “Frozen” brought in some $155 million at the box office and was seen by more than 1.35 million viewers.

“Beetlejuice,” another big-budget production, has already announced that it will not return to the stage, though the show was already slated to end in June, even before the coronavirus struck.

The plays “Hangmen” — which had not yet opened — and “Who’s Afraid of Virginia Woolf?” also announced their closures, though they were both more limited productions than a musical.

The Broadway League professional association announced Tuesday that New York’s famous theaters will remain shuttered until at least Sept. 6, and local authorities have not yet offered a potential timeline for reopening.

And on Wednesday the musical “MJ” announced it would also open in March 2021 instead of July 2020.

“Frozen” could still tour in North America or maintain performances in London, Sydney, Hamburg and Tokyo, the production said.

The first performances are currently set for the end of October in London and early December in Sydney.

The North American tour is set to begin in Boston on Sept. 9. IB

Broadway to stay closed until at least September