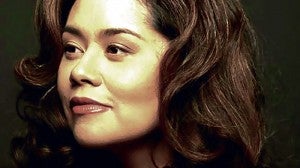 WHEN it was announced that Resort World’s hit production of “The Sound of Music” would be followed by its staging of the similarly popular musical, “The King and I,” theater circles buzzed with speculations over who would be tapped to play the male lead role of the King of Siam, and the British teacher he hired to educate his many children.

In the musical’s film version, the roles were memorably portrayed by Yul Brynner and Deborah Kerr, respectively.

Well, after weeks of suspense, the verdict is in: The king and teacher Anna will be respectively played by Leo Valdez and Monique Wilson. To our mind, those choices are inspired, and amount to a veritable casting coup that makes us more eager to catch the show when it opens.

Leo as the King of Siam? Of course—after playing The Engineer in “Miss Saigon,” it’s a natural follow-up move for him—and he can retain his now signature “totally clean-shaven” look, to boot.

As for Monique, for a moment there, we were worried, because we knew that she isn’t in the best of health. But, we’ve been assured that everything has been taken into consideration, so she should do very well indeed in the plum role.

In addition to her talent and experience, Monique brings other pertinent plus points to the role: She’s performed in London for years, not just in “Miss Saigon,” and in fact spends most of the year there as the head of the East15 theater department’s MA/MFA Acting International program.

Other “King and I” trivia: In the film version, the featured role of the young Crown Prince who becomes Anna’s protegé was played by a Fil-Am talent, Patrick Adiarte.

More: In one of the local stagings of the musical, way back when, the actress who played Anna was stymied when the production crew played a naughty trick on her: At the end of the show, she unrolls a scroll and movingly reads from it the king’s last message to his people.

So, what was the trick? On the last performance, when the actress unrolled the scroll, she found that it was blank! Since she hadn’t bothered to memorize its contents (because they were usually there), she had to awkwardly ad-lib her way through the climactic scene. —Grrr!

Well, local theater lore is full of “goodtime” stories like that (we really must write a separate article to do full justice to them).

Another casting coup of the first order is the announcement that, in the film on Liberace’s colorful life and times, the florid “classical” pianist and “queen” of Camp will be portrayed by—Michael Douglas! The veteran actor is famously macho, so his selection for the role comes way out of left field.

But, you know what? We have a gut feeling that he’ll go to town with the role, and stunningly prove his detractors dead-wrong.

After all, the best actors really shine when they believably play, not mere variations on their own persona, but characters completely different from themselves!