The challenge of T.V. Carpio playing Arachne in ‘Spider-Man’ 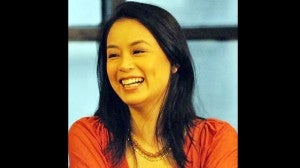 “Spider-Man: Turn Off the Dark” was a visual feast, with thrilling acrobatic feats and bigger-than-life moving screens that change images and colors. And who can forget that breathtaking midair battle between Spider-Man and Green Goblin?

I had this feeling that, ‘Oh God, I hope the cables are secure enough, and that there won’t be any accidents tonight.’ It felt chokehold-uncomfortable as the show was going on, but there was a sense of relief and awe when it was over.

When T.V. Carpio, playing Arachne, emerged from the ceiling, boasting her moving claws and spectacular costume, I closed my eyes and paid attention to her voice. It was pristine and heavenly. You could not believe her soulful singing while the harness was doing a Heimlich Maneuver on her waist.

“I was fine singing, except that it was too tight,” T.V. Carpio, who played Arachne, told The FilAm when interviewed a day after the show opened on Broadway on June 15. She was referring to the harnesses and cables keeping her secure as she swung and sang across the stage.

“It felt like I’m out of space, so detached, it’s like there’s a stillness about it,” she said. “And then I breathe, I just remember to breathe. But I didn’t realize until later that the harness is so uncomfortable, very tight around your waist, especially when you’re singing parallel. That’s the hardest part.”

“Spider-Man” is Teresa Victoria Carpio’s – also known as T.V. – biggest break. The production took all of four challenging years to mount on Broadway, if we count the numerous accidents suffered by some members of the cast, the astronomical cost, and the departure of director Julie Taymor. T.V. got into the production when she signed up for the musical workshop in 2007.

“Breathing is a big thing,” said T.V. “If I breathe then it takes away the tension from any discomfort and pain. The hardest part I guess is getting all the technical to mesh with the acting part. But the best part is doing it in front of a live audience.”

We were not the only ones at the edge of our seat while watching “Spider-Man.” T.V’s mother, Chinese-Filipino Teresa Carpio, was in high-anxiety mode when the show opened. Teresa is a popular Cantonese pop singer in Hong Kong, and has been in show business for 42 years.

“When you hear so much about the accidents and all, I got nervous,” Teresa told Filipino and Chinese journalists at a press conference with her daughter. She recalled how she wanted to catch the soft launch, but T.V. cautioned her to stay away: “Mom, don’t come. I got hurt.”

“It’s hard to say there’s nothing you can do, you’re hopeless. You know at that moment I just want her to just rest and not do anything,” said Teresa.

It was the fight scene between Arachne and Peter Parker. The actor playing Peter jumped over T.V. causing her to fall on her head.

“Peter didn’t realize I was hurt, so after that incident, he strangled me and hit my neck again. And at the very end he choked me and he tripped,” T.V. narrated. “I’m OK now.”

She didn’t leave the show, she said, believing in what the production stood for. “It was going for a deeper meaning more than just a Spider-Man story.”

Teresa said she appreciates the concern of everyone in the production, including Bono, who co-wrote the musical with The Edge.

She is proud of what her daughter has achieved thus far in a city as tough and competitive as New York.

“A lot of people come up to me and ask what does your daughter do? I say, my daughter is a professional auditionee! She would literally go to every audition. She would not give up,” said Teresa casting a teasing look at her daughter. Mother and daughter share a knowing, loving laugh. “I’m proud of her.”