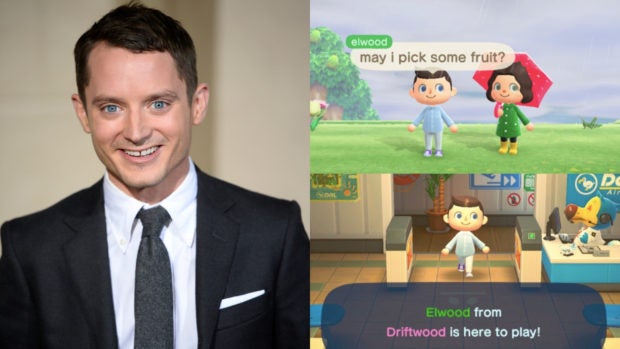 “Lord of the Rings” movie star Elijah Wood was apparently no stranger to visiting foreign lands.

The actor appeared to be a courteous guest when he visited a fellow gamer’s “Animal Crossing” island to sell some of his own turnips.

The fan, named Jessa (@directedbyrian), could not contain her excitement after Wood privately messaged her via Twitter and asked for her Dodo Code. An “Animal Crossing” player named Elwood then visited her island, harvested fruits and hung out with other players, as seen on Jessa’s Twitter posts yesterday April 24.

“[Guys] I tweeted my turnip prices and elijah wood just came to my island and hung out,” the fan said. “[This] is the best day in quarantine yet.”

The fan showed the message from Elija Wood’s official Twitter account asking for her 5-digit code which “Animal Crossing: New Horizon” players use to visit others’ islands. Jessa also documented Elwood’s visit last Thursday, April 23, right from the moment he arrived until he left.

Elwood also complimented the other player’s island by saying “your island is beautiful.”

guys I tweeted my turnip prices and elijah wood just came to my island and hung out 😭😭😭😭😭 this is the best day in quarantine yet pic.twitter.com/H3mYJWnvgR

Elwood’s parting words to his fellow players before he left the island was “long live [Rian Johnson],” referencing the American film director behind the movies “Knives Out,” “Star Wars: The Last Jedi” and “Looper.”

“[I] knew i could trust elijah wood with my life,” a certain @bensforce uploaded via Twitter on April 24.

i knew i could trust elijah wood with my life #AnimalCrossing #ACNH #NintendoSwitch pic.twitter.com/80K8K6pOIN

Jessa also encouraged Elwood to “visit anytime,” after showing the player going home to his own island.

Earlier that day, Jessa announced her price for turnips in the game was 599 bells per turnip. The post in question, which prompted Elwood’s visit, got over 10,000 likes and almost 500 retweets, as of this writing.

my price for turnips is 599 bells!!! dm me for dodo code 💕 #AnimalCrossingNewHorizons #acnh #turnipprices pic.twitter.com/dsU23mo9bw

According to The Verge, Jessa’s selling price for the turnips was a particularly appealing deal for other players, considering that the “good” selling prices for the root vegetable in the game range from 300 to 400 bells.

Many players from all over the world are also trying to maximize their in-game profits by turning to the internet to find the best deals to sell their turnips in “Animal Crossing: New Horizon.”

While more and more people turn to video games to pass the time during the COVID-19 pandemic, the recently released Nintendo game has set a record for the most number of digital console games sold in a single month after selling 5 million copies last March.  /ra