Darren Criss reflects on being half Filipino, which he plays in Ryan Murphy’s ‘Hollywood’ (Conclusion) 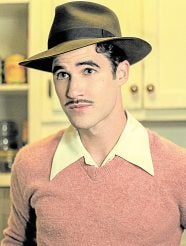 LOS ANGELES—Here’s the second part of our interview with Darren Criss, who will be seen next in Netflix’s “Hollywood” and Quibi’s “Royalties.”

I learned that Darren, who is the first Filipino-American to win a Golden Globe, has lovingly given his trophy to his Cebuana mom, Cerina, which she proudly displays in her home.

He explained, “I dedicated it (Globe triumph) to my mom, who, back to the Filipino culture thing, is a classic example of the American dream. She came here. Even in my Golden Globe speech, I was nervous. There were things that I would have worded differently. She dreamed of being at parties like that.

“Somebody said, ‘Wait, so you didn’t bring her?’ I’m like, ‘Of course, I brought her! She was in the room.’ I said, ‘I know you’re watching me.’ Because I knew she was watching the screen from the room.

“Anyway, my mom was the youngest of seven from the Philippines. She grew up idolizing American culture, movies and music. While she’s Filipino and obviously has a love for the Philippines, I think any person who has immigrated to the United States can attest to that kind of the great dream of being in America.

“I mean, her version of America was my version of Hollywood, right? Of wanting to work hard enough to where I can get to the promised land, to Oz. Getting to that great next step. And so, we both really worked our whole lives to make those dreams happen.

“A huge part of my success in Hollywood is attributed to both my parents. I dedicated it (Globe win) to my mom, but of course it was dedicated to my dad (Charles William) as well. But my dad is such a selfless guy that he would have said, ‘No, no, no. If you’re going to say anything, just make it for mom.’ In doing that, I was also honoring my dad.”

I told Darren that I would have done anything to be in his piano bar, Tramp Stamp Granny’s, located in—where else—Hollywood, when the cast, led by Patti LuPone, showed up. Of course, this was in prepandemic times.

“That was very cool,” Darren remarked, beaming. “Patti came by. We had a little cast get-together at the bar. Our cast is not at want for singers and theater people. David (Corenswet) is a marvelous singer and musician, as are Jeremy Pope, Jake Picking and, obviously, Patti LuPone. And everybody else likes music and to drink. So it seemed like a natural series of events that they would come and I’d host them at the bar.

“Patti is the kind of person that you kind of nudge and say, ‘Come on and sing something for us.’ A lot of people in her position are like, ‘No, no, no.’ But Patti understands the joy that she gives people. So she embraces it.”

But what the beloved Broadway titan sang was the highlight. Darren shared, “She sang ‘Don’t Cry for Me Argentina,’ which isn’t exactly an up-tempo song. It isn’t exactly the kind of song you want to hear at the bar when you’re three drinks deep. You want to hear something upbeat. I don’t think anybody could have cared any less. It was a great joy to be in that moment.

“That’s another thing that makes this show so special—you have a great balance of the upperclassmen and underclassmen, and they’re all feeding off each other.”

Looking ahead, Darren said that, via FaceTime, he was still rehearsing the Broadway revival of David Mamet’s “American Buffalo,” with Laurence Fishburne and Sam Rockwell. The play, which would have opened on April 14 at the Circle in the Square Theatre, has been pushed back due to the coronavirus crisis.

“There are shows that have been shut down, which is heartbreaking,” Darren commented about Broadway, which was shuttered by the pandemic. “Because I was really looking forward to those shows.”

The 33-year-old, whose Broadway credits include “How to Succeed in Business Without Really Trying” and “Hedwig and the Angry Inch,” remains hopeful. “But, knock on wood, if we’re lucky, we’ll be able to persevere. And with any luck, we’ll be open in however many months it takes for Broadway to be safe again. So we’re still rehearsing that via FaceTime. We haven’t thrown in the towel.”

And the singer-songwriter is jazzed up about “Royalties,” his musical-comedy series on Quibi, Jeffrey Katzenberg and Meg Whitman’s short-form video platform. Darren is the show’s cocreator, composer and star.

He enthused, “‘Royalties’ is a zany love note to songwriting. It’s a show about songwriters. It’s a very kooky show about two wannabes, and hopefully successful songwriters, who happen to have different assignments every episode with different artists and the wacky adventures they get into.

“It’s a scrappy, silly show that I created with some of my friends. The great Amy Heckerling of ‘Clueless’ and ‘Fast Times at Ridgemont High’ is our esteemed director.”

He’s also optimistic about this other show’s new mobile-phone-only streaming service outlet. “Quibi is the Wild West. Our show comes out in June. I’ve been working on that show the hardest.

“And while I’m obviously super excited about ‘Hollywood’ coming out, it’s nice that both ‘Royalties’ and ‘Hollywood’ will be released into the world.”As our chat wound down, I asked the multitasking talent about his self-isolation life.

“I’m happy to have the time at home,” answered Darren, who enjoyed a holiday in the Philippines last year before taking on all these projects. He chilled with his wife, Mia Swier, in El Nido Resorts in Palawan and hung out with Francis Libiran (who created two barongs for the star’s wedding, also last year), Arsi Baltazar (the designer’s manager), and his team.

In Darren’s background are large windows that make the room, featuring a piano, look bright and airy. “The irony is that when I have free time, the days go by so fast. 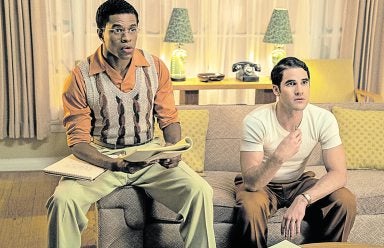 “A lot of actors hate waiting for hours and hours. I’m the kind of guy that if you told me, ‘I’m sorry, Darren, you’re going to have to wait in your trailer for 10 hours,’ that would be the best thing ever for me because I can make those 10 hours go by so fast.

“In quarantine, a lot of people are doing amazing philanthropic and outreach efforts. I’ve been involved in a lot of those, making videos.

“I have ‘The Disney Family Singalong’ that’s later today. Just making all this content, which has been really time-consuming. If I had none of that to work on, there’s [still] so much to do.

“I have this whole rule that I got to make something, learn or clean something. Sometimes, I combine them. I’ll be learning my Japanese while I’m getting rid of old clothes and papers, all the stuff that we all wish we had time for. This is the time to do it.

“But I will say, finally, that I’ve retroactivated stuff that I did as a kid. I bought a bunch of Legos. So I’ve built some Legos, a complete luxury that I never have time for.

“I bought a Nintendo Switch. I haven’t bought a video-game system in years. Twenty years ago, my parents helped me buy it. So, I’m playing video games, stuff that just sucks time out.

“But now, I’m giving myself time to enjoy the luxuries of life, like video games. I don’t watch TV or movies.

“I say this with a grain of salt because my shoutout goes to all the parents (who are home-schooling their children). There are so many people out there, obviously the health-care workers, delivery people and the people on the ground, keeping everybody safe and healthy. I think of my brother-in-law and sister-in-law. One works in health care. The other one has two kids to take care of. My hats go off to them.

“And so when I say all the stuff I’ve been doing, I have survivor guilt because I realize that I’m very fortunate. A lot of people out there are hurting and this is a very difficult time. So anything that I can do to bring a smile to their face or ease the tension via some of these fun things I got to be involved in, like ‘The Disney Family Singalong’ … It’s not much, but it’s the most that I can do in this time.”