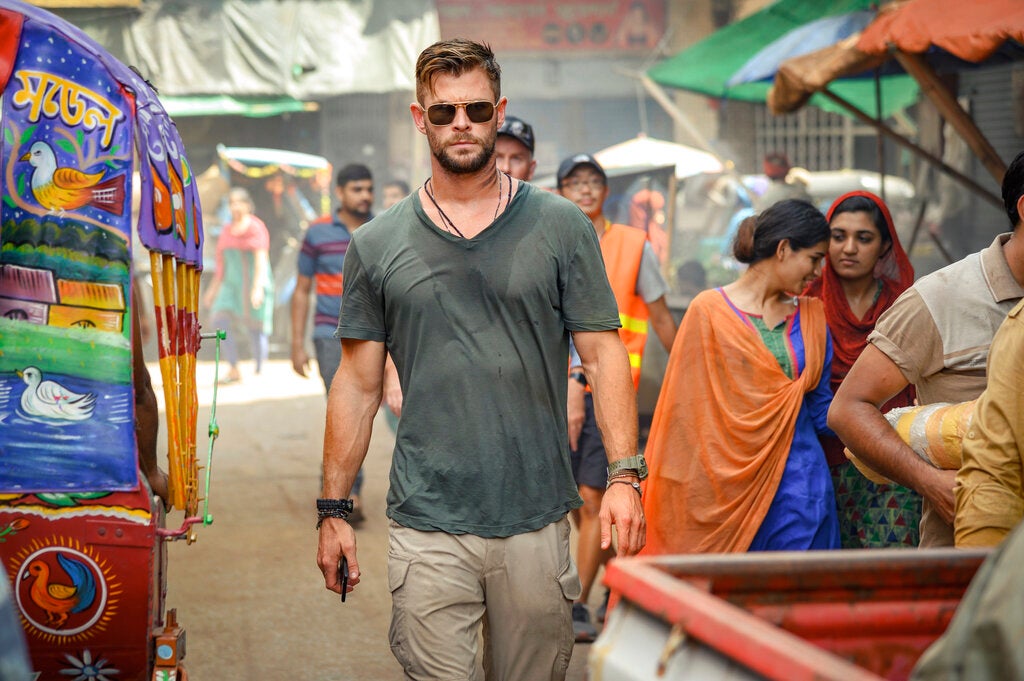 This image released by Netflix shows Chris Hemsworth in a scene from “Extraction,” premiering this week on Netflix. (Netflix via AP)

Tyler Rake sounds like a Mad-Libs action hero name. When you add to the mix that this character actually, literally kills someone with a rake, it starts to veer into parody territory. That’s why it’s somewhat surprising that the film built around that wonderfully silly name, “ Extraction,” is entirely sincere and also pretty fun.

“Extraction,” on Netflix Friday, is a straightforward shoot-em-up about a jaded mercenary, Mr. Rake, played by Chris Hemsworth, who’s hired to save the 14-year-old son of a drug lord from another drug lord in Bangladesh. It doesn’t do anything to push the genre forward, but it’s better than you might think, existing comfortably somewhere on the action flick spectrum between Tony Scott and Peter Berg.

Much of that rests on Hemsworth’s (very large) shoulders. The Australian actor hasn’t had the easiest job finding solid roles outside of Thor. He’s always good even when the movie isn’t, and obviously has some tricks up his sleeves that belie his action-hero physique. But many of his leading man roles that don’t have anything to do with the God of Thunder have come and gone without much fanfare. So it makes a certain amount of sense that “Extraction” is Marvel-adjacent. It’s written by Joe Russo (one half of the Russo brothers who have directed a handful of Marvel movies, including “Avengers: Endgame”), directed by Marvel stunt coordinator Sam Hargrave in his debut and based on a graphic novel (“Ciudad”).

The graphic novel origins help explain “Tyler Rake,” but that name is about the extent of the comic book elements in the actual film. And, to be fair, “Extraction” even knows it’s ridiculous, hence the rake and the fact that the 14-year-old asset Ovi (Rudhraksh Jaiswal) walks up to the line of making fun of it at one point.

The film begins at the end, showing Tyler Rake (it just feels more right to say his full name) bloodied, battered and near-death on a bridge, having blurry flashbacks to some feet in the sand before cutting to two days earlier in Mumbai. (Don’t hate “Extraction” for its cliches, they’re just part of the fun).

It won’t shock you to learn that Tyler Rake is a bit of a loner who keeps his living quarters in shambles, but you get the sense that he always knows where the bottle of Oxy is. A woman (Golshifteh Farahani) comes to him with the job to save the kid, whose father is in prison, and Tyler Rake sets off to Dhaka to track him down. There, the criminal underworld plays out in broad daylight, with crime bosses, child soldiers, corrupt police and an overall vibe of instability populating the streets. Tyler Rake finds the kid easily enough, but then things start to get more complicated when he discovers that he’s not the only one looking for Ovi (and ready to kill to get him).

But don’t despair, Tyler Rake has about two hours of non-stop fight in him before he gets to that bridge and the blurry flashbacks. He’ll fight, and win, against anyone who comes in his way — even a group of kids. He doesn’t kill any of them, though. He just kind of injures and disables the “Goonies from hell.”

The word distraction has started to lose all meaning this deep into our home lockdowns, but there is a certain comfort in curling up with a big, silly action pic like “Extraction.” It reminds you of something you might have spent money on to see in an ice-cold theater on a hot summer day.

“Extraction,” a Netflix release, is rated R by the Motion Picture Association of America for “strong bloody violence throughout, language and brief drug use.” Running time: 118 minutes. Two and a half stars out of four.