Darren Criss reflects on being half Filipino, which he plays in Ryan Murphy’s ‘Hollywood’ | Inquirer Entertainment
Close
menu
search

Darren Criss reflects on being half Filipino, which he plays in Ryan Murphy’s ‘Hollywood’ 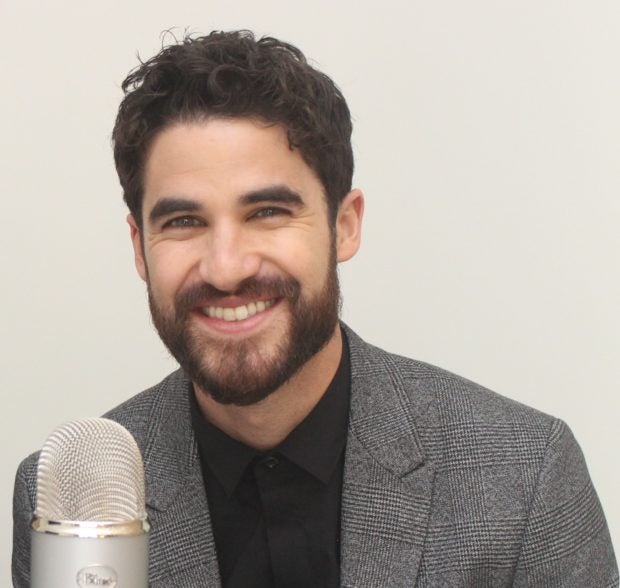 LOS ANGELES—In one scene in Ryan Murphy’s new series, “Hollywood,” Darren Criss’ director character, who is trying to make his first film in the 1940s when racism was still pervasive and “white-passing” was common, makes a confession: “I’m half Filipino.”

To most viewers of the show which will premiere on May 1 on Netflix, that statement may seem innocuous. But to many Filipinos who will hear those three words, that’s a big moment to hear a major character in a mainstream show declaring his Filipino heritage. Especially in that era, and even today, when there are still talents who pass themselves as white out of “career necessity.”

“Identity and terminology—it’s a new concept that I’ve had to learn,” admitted Darren, who is himself half Filipino and half white, in a recent exclusive interview via video conference. He has proudly acknowledged his Filipino heritage in the past and once addressed a controversy on this topic when he was misquoted.

“It has always been an interesting point of conversation that I’ve gotten more familiar with in the past two or three years,” the multitalented performer said. “Because I have a public profile, I have to worry about the term ‘white passing.’ It was something that I was not familiar with because I guess I never really felt that way.”

In Darren and Ryan’s riveting follow-up to their “The Assassination of Gianni Versace: American Crime Story,” which netted Emmy and Golden Globe Awards honors, including historic best actor wins for the former, it’s post-World War II in Tinseltown.

The limited series follows a group of actors and filmmakers, including Darren’s Raymond Ainsley, as they try to make it in Hollywood, where the unfair systems and biases across race, gender and sexuality are still very much in place.

It was a time when the likes of Anna May Wong (the first Chinese-American film star), Hattie McDaniel (the first person of color to win an Oscar) and a closeted Rock Hudson dealt with many obstacles. The drama also occasionally pivots around Golden Tip Gas, based on a real gas service station in Hollywood which had pump jockeys who “serviced” celebrities, many of whom were hiding their sexuality.

Darren’s Raymond is an upcoming director, fresh out of film school, who is dreaming of making his first film. Although he “passes” for white, the half-Filipino filmmaker Raymond aspires to broaden the stories that Hollywood tells.

While the eight-episode series tackles the sexism, racism and homophobia of the ’40s, “Hollywood” intentionally features revisionist history, including “a beautiful fantasy, a happy ending”—in the words of Jeremy Pope, who plays Archie Coleman, a “colored” screenwriter also trying to make it.

It’s all in keeping with what Ryan said to Darren over dinner when they planned their next project after “Versace.” The prolific director-producer wanted a “young, hopeful period piece.”

In this mix, most of the characters are somehow involved in “Peg,” a movie which Darren’s Asian-American director is trying to make, against all odds. Darren, who was eager as an actor to explore what it means for somebody who passes as white, reflected on the topic. 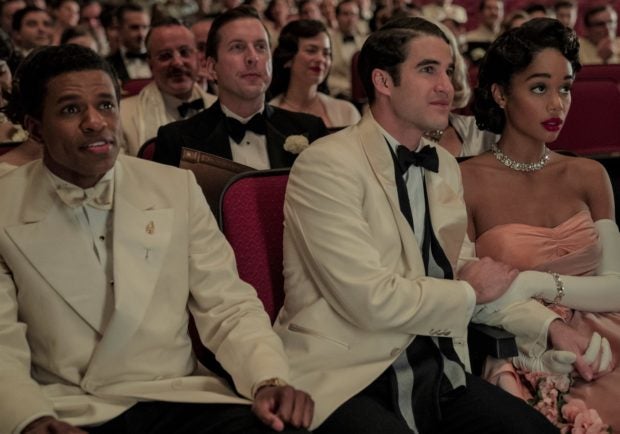 “I just was always Filipino and white,” Darren began talking about the issue. He was at his home in LA, self-quarantining with his wife, Mia. “I was always both. I never thought about it as a concept that you could be passing (as white). That it was a concept that could somehow give one more access to things than others.

“I started realizing that maybe there are inbuilt unfortunate prejudices that restrain those people from opportunities that they should otherwise have.

“I feel the survivor’s guilt more recently than ever. Because you think of a lot of any historically marginalized people. If you have this access card, how do you use it in a way that can be advantageous for the other part of you that represents the marginalized group?

“Doing these interviews made me think about how Ryan has a very similar construct, which is being a young gay, closeted kid in a small town in Indiana. It’s an incredible amount of adversity to overcome personally and socially. So, once he grew to accept this and made it part of his strength, he got to a point where he could break through barriers perhaps by way of him being a man, perhaps by way of him being white.

“Ever since he broke through those barriers, he’s been using his position to be an advocate for the queer community, women, people who have been marginalized in any way, shape or form.”

After apologizing for stepping away from his desk to open the door for someone, Darren continued, “Similarly, Raymond has been doing that. Like Ryan, Raymond has been fueled by the things that he used to be scared of, or have shame of. He has turned it around, and owned it to make sure that he can use that as fuel for his sort of social justice crusade.”

Darren, who grew up in San Francisco with a Filipino mom and an American dad, pointed out, “That is a very different scenario than what I grew up with, obviously. I grew up in a predominantly Filipino community in the Bay Area. It was a part of my life that I always felt supported. 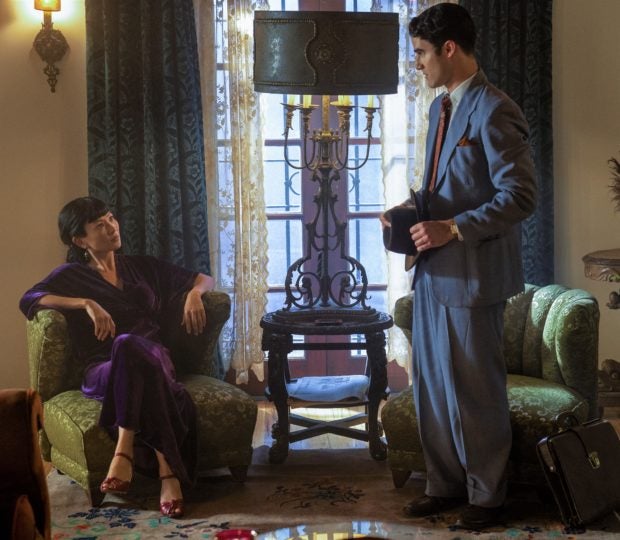 “When I was in high school, with a lot of Filipino kids, when they’d find out I was Filipino, they would be like, ‘No way!’ It’s the kind of thing that I always loved. I’d be more willing to shove my white background aside in order to tell people I was Filipino. I’m very lucky that my scenario was different.

“Ryan wanted to show that very unique story, because being half anything is a very unique identity. Not struggle, but a constant question. Anybody who’s half or mixed race will tell you that everyone’s experience is different.

“That was a part of me in the same way that Ryan likes characters who have a queer narrative or women who have a narrative of being mistreated because they were older, or people of color. I was just a small piece of a large puzzle that contributed to the types of people that were trying to push the needle forward. In Ryan’s mind, it would have been a shame to ignore the fact that I was half Asian.”

“Hollywood,” shot in LA’s landmarks from Paramount Studios to the iconic Musso & Frank Grill, also marks the first time Darren serves as an executive producer of a major production. “I’ve produced stuff in so far as I had a theater company and a production company out of college,” he clarified. “But that’s a very loose title. It was just me and my friends putting on a show. It doesn’t have the same flash on it that a Netflix show does. I’m also the creator and exec producer of my show (‘Royalties’ on Quibi).

“I finished that show, then I went straight into ‘Hollywood.’ I was on postproduction for ‘Royalties’ at the same time I was shooting ‘Hollywood.’ It’s been probably one of the most packed, overworked years of my entire life.

“Ryan was very gracious to include me with that title. He was receptive to my feedback, but for the most part, I stayed back and let Ryan do his thing.

“He called me early on saying, ‘Do you mind if I just do my thing on this?’ I was like, ‘No, of course not. This is your project. I’m just grateful and lucky to be a part of it.’”