Gretchen Barretto, doing what she does best 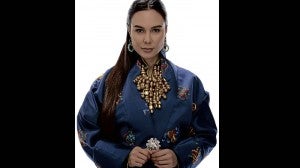 In her new ABS-CBN teleserye “Princess and I,” actress Gretchen Barretto plays Ashi Behati, wife to the vice king of a fictional kingdom called Yangdon. Her aim is to snatch the throne from its current ruler, King Anand (Albert Martinez).

The series recounts the adventures of Mikay (Kathryn Bernardo), daughter of King Anand and Queen Isabel (Precious Lara Quigaman). Mikay is the long-lost crown princess of the kingdom. She is secretly brought to Manila as a child after Ashi Behati, who desires the crown for her son Prince Jao (Enrique Gil), attempts to kill her. Now all grown up, Mikay returns to Yangdon to reclaim her true identity.

Director Dado Lumibao is convinced that the 16-year-old Bernardo has potential. “You still have to guide her through her character, of course … In one scene, Kathryn is required to go through a whole range of emotions—from sad, to longing, to happy, to pretending. She is slowly getting to know her character. I’m very impressed.”

Gretchen said she only got to work with Kathryn in one sequence. “But we had a lot of bonding moments there. We stayed in the same hotel so I got to know her and her mom. I was amazed at how much she loves her craft. When I was younger, puro lang laro. Kathryn is very focused.”

Gretchen, who admitted feeling sad and disappointed when her drama series “Alta” was shelved, said she has found a worthy replacement via “Princess and I.”

“I found comfort in the thought that God had better plans for me, and that He would give me only the things I deserve,” Gretchen told entertainment writers during the recent launch of “Princess and I” at the Kapamilya compound in Quezon City.

Conflict in the actors’ work schedules was reportedly the reason “Alta” was shelved. Gretchen was to star in the series with Angelica Panganiban, KC Concepcion and Diether Ocampo.

“‘Alta’ was all about high fashion, which is in my comfort zone,” said the actress. “But this is a totally different project. I consider this the role of a lifetime. It’s something I know I can still be proud of after I’ve retired from this business.”

Asked whether she thought “Princess and I” was a mere consuelo de bobo or consolation prize, Gretchen replied: “I felt that way in the beginning. I had a lot of questions about the script when I first read it. In fact, I wanted to back out at one point. But now that we’re shooting, I realize that it’s worth it. I was impressed when I saw the trailer.”

Lumibao admitted that he initially felt nervous at the prospect of working with a superstar like Gretchen. “Princess and I” is his first soap series. “I know her to be very particular with her coworkers—if she doesn’t like you, she doesn’t. I was thinking, will we click? But we did, immediately after our story conference.”

The director added that he learned a lot about Gretchen at work. “She’s very professional. Contrary to what people may think, she didn’t have a lot of demands. She just asked for a comfortable working area, which was understandable. She listens and she follows (instructions). And she delivers. It’s obvious that she likes what she does.”

Some 40 percent of the series was shot in the South Asian kingdom of Bhutan. Filming in the Himalayan kingdom lasted about 10 days, Lumibao said.

He explained that the idea to work in Bhutan came from ABS-CBN chair and CEO Gabby Lopez, “who immediately fell in love with the place when he first visited it. This was why the creative team thought of a story that would best showcase the beauty of the kingdom.”

Lumibao said he was grateful to the Bhutanese government and its people for their support. “Apart from the cold weather, we didn’t have trouble shooting. The people welcomed us. They allowed us to use their costumes, which are sacred to them. They allowed us to portray their way of life and culture.”

Actors were made to learn the dialect Zongka and wear the traditional Bhutan costume called Goh, “to add authenticity to the story,” continued Lumibao.

“It took forever to put on the costume,” Gretchen recalled. “We also had to work in the cold. The temperature would drop to about 3 degrees. We wore thermals under our outfits. But apart from that, I’m really enjoying the role. It’s every actress’ dream to play a queen. I’m living that dream now.”

The production team also hired a Bhutanese actress named Lucky as a consultant to help the cast members speak Zongka better, said Gretchen. “I really want to express my appreciation for Lucky. Teaching us to speak Zongka was not easy. She was very patient. And as an actress, she taught us what emotion to convey with each word.”

Lumibao said there is a plan to sell the series abroad, although he’s not sure about airing it in Bhutan: “Their TV industry is still quite young. They don’t import programs. So I don’t think they’re ready for this yet.”

“Princess and I,” which Lumibao codirects with Francis Pasion, also features Daniel Padilla, Khalil Ramos, Dominic Ochoa and Yayo Aguila. The series, which premiered on April 16, airs weeknights after “TV Patrol” on ABS-CBN.