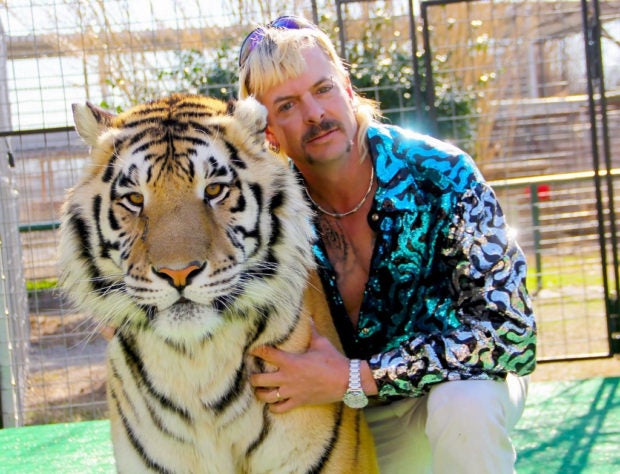 Joseph “Joe Exotic” Maldonado-Passage with one of his tigers. Image: Courtesy of Netflix via AFP

Amid a constant swirl of grim coronavirus news, the surreal tale of a gay, mullet-wearing private zookeeper who calls himself “Joe Exotic” — now in prison for murder-for-hire — has captivated a nation stuck on the couch.

And it’s all true.

With the vast majority of Americans ordered to stay at home to curb the spread of the deadly virus, the Netflix true-crime series has become a must-see binge-watch for the masses.

He made a small fortune on his questionable private zoo — and then lost it all in a maelstrom of jealous feuds, mysterious fires, failed political campaigns and convoluted murder plots.

“Tiger King” begins and ends at a prison in rural Oklahoma, where Joe Exotic was serving his 22-year sentence until he was transferred to a federal facility in Texas last week.

But the story of how he got there — with one bizarre, shocking turn and one sordid scheme after another, all caught on cameras originally aimed at exposing animal abuse — has turned Joe into something of a national anti-hero.

Fans are dressing up in feline-patterned garb, getting Joe Exotic haircuts, and posting pictures of themselves with their pets — real and stuffed — on social media.

Rap star Cardi B said she wanted to raise money to help reopen his case to get him out of jail — and then said she was “just playing,” though she added: “I do love him tho.”

An array of actors are photoshopping themselves into Joe Exotic pics, though the directors of “Tiger King” say Joe himself would like Brad Pitt or David Spade to do the honors.

The series has put retired basketball Hall of Famer Shaquille O’Neal on the spot. O’Neal makes a cameo in the documentary, but has insisted he was only visiting.

“I don’t harm tigers,” he said on his podcast. “I love tigers. I was just a visitor.”

Just as the virus crisis has fueled his ticket to stardom, Joe has been sequestered in a special prison wing due to possible coronavirus exposure, his husband said this week.

‘She fed him to the tigers’

Joe’s zoo is full of tigers, lions, cougars, leopards and hybrid cats. Tourists paid to pet the cubs, and watch the flamboyant zookeeper — with multiple piercings and a pistol at his hip — play with them. He sings too.

Surrounding Joe is a cast of colorful characters including his husband rendered near-toothless by meth abuse, a legless zookeeper and an aide who lost an arm to a tiger.

There is also a somewhat oblivious former Walmart manager who earnestly oversaw Joe’s campaigns for U.S. president and Oklahoma governor. Yes, for the White House.

On the other side is Carole Baskin, the activist owner of Florida-based Big Cat Rescue, who is determined to shut Joe’s zoo down due to his alleged back-door business of illegally breeding lions and tigers for sale.

Joe argues that Baskin is no better than he is — making money by showing cage-bound cats to ticket-buying tourists. The two wage an online and ultimately legal battle.

Both embrace the gaudy tiger and leopard print attire. Joe even blamed the activist for the unsolved disappearance of her millionaire husband more than two decades ago.

“We believe she fed him to the tigers,” Joe says.

Joe is ultimately brought down by his desire to crush — and finally try to kill — Baskin.

He was convicted of paying someone $3,000 (about P152,000) to kill Baskin and handed the long prison sentence in January.

Joe has since filed a massive lawsuit, claiming he was convicted on the back of false testimony.  And though he has no television in prison, he is aware of his unlikely overnight fame.

“Joe is somebody who has always wanted to be a star, and so he’s very excited for this to have captured people’s attention the way it did,” “Tiger King” co-director Rebecca Chaiklin told The Hollywood Reporter. RGA

Panther stolen from zoo after rescue from French rooftops