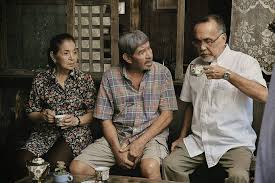 “At least he was able to say goodbye to everyone,” said director Adolf Alix Jr. of actor Domingo “Menggie” Cobarrubias, who passed away at 8:20 a.m. on Thursday due to complications of pneumonia. He was 66.

Cobarrubias’ family was still awaiting the result of his test for the novel coronavirus (COVID-19) that was taken on Tuesday. The veteran actor’s last entry on his Facebook account on Wednesday night was the word “good bye.”

“I even sent him a message after reading his post, but he didn’t get to reply anymore,” Alix told Inquirer Entertainment on Thursday morning. The two last worked together in the horror film “Misterio dela Noche,” starring Solenn Heussaff.

Filmmaker Easy Ferrer said he initially thought Cobarrubias’ post was all part of a prank, “since he was really a joker. He was known for his dark humor. But then, I saw the comments and figured that it was something serious. People then told me he was in the hospital,” the director said. “When I woke up the following morning, people were already saying goodbye to him in their comments.”

The last film Cobarrubias had worked on was Chito Roño’s upcoming mystery thriller “Ang Mga Kaibigan ni Nanay Susan,” where Ferrer is the creative manager. “His last shooting day was on March 4. That was also the last time we were together,” recalled Ferrer.Cobarrubias was also a part of Ferrer’s romantic drama “Finding You,” starring Jerome Ponce and Jane Oineza. According to reports, Cobarrubias was brought to Asian Hospital and Medical Center in Alabang in the afternoon of the day he was sent home by another hospital in Makati that found his three-week-old fever already manageable.

The actor had already acquired pneumonia in 2009. He also had atrial fibrillation and the reflux disorder GERD. Hours before his death, wife Gina gave a DNR (do not resuscitate) order to his doctors as part of the hospital measures that the couple earlier agreed upon.

Gina confirmed her husband’s death in a Facebook post: “Goodbye, my love. Thank you for 30 wonderful years. I love you. Dear God, please give me the strength to be able to face this very difficult moment of my life.”

Details of Cobarrubias wake have yet to be announced.

“He was always there, ready to help everyone. I will miss a good friend and a great actor,” said Carlo Enciso Catu, who directed Cobarrubias in “Kung Paano Hinintay ang Dapithapon.”

Like Ferrer, Catu also thought Cobarrubias was merely telling a joke when he first read his last post on Facebook. “Those were his kind of jokes. Sometimes, you don’t know if he was already being sarcastic,” said Catu.

Still, Cobarrubias’ message affected him so much that, on Wednesday night, he found it difficult to sleep. “I kept recalling his last line in the movie. He said: ‘Sana bukas, mahal mo pa rin ako.’ I fell asleep at around 8 a.m., and got a confirmation of his death from my mom when I woke up. Losing him is so painful. He was one of the kindest men I know.”

Alix recalled: “I first worked with Tito Menggie in 2009 for the movie, ‘Manila.’ He said he was so happy to be part of the cast because his role there was a squatter (illegal settler), when he was so used to playing a rich person. It was a first time for him. Since then, we would always communicate. He told me to always include him in my films, no matter how small his role is.”

Alix further said: “When his schedule permitted, Tito Menggie would join our cast. Since he was a regular, we were already used to his being a joker on the set.”

On his Facebook account, Alix said: “I will miss you. [You’re] an underrated actor who always brought his A-game to his craft… It was always a fun set when you were around. You always said that you were my favorite actor aside from Tita Anita (Linda). Thank you for treating us as part of your extended family.”

Ferrer likewise recalled his fondest memories with Cobarrubias. “I also like to joke around on the set to lighten things up—bentang-benta sa kanya ang mga ’yon. He would follow them up with equally funny punchlines,” Ferrer said: “I remember when we were shooting a wedding scene for ‘Signal Rock,’ and Direk Chito was already stressed because it was getting late. Tito Menggie played the mayor and Tita Ces (Quesada), his first lady. We kept joking around, and they had a hard time controlling their laughter. The camera would sometimes get focused on them and an already-irritated Direk Chito would ask, ‘Bakit ba tawa kayo ng tawa d’yan?!’”

Catu said he would always try to think of a role for Cobarrubias in his projects. In fact, he likewise got the latter to be part of Kyle Jumayne’s “Gulis,” which he produced.“It’s because he was a team player, but, of course, ’di naman lahat swak. His presence will be missed. I can’t believe that, in my next projects, he will no longer be around,” Catu said.

Cobarrubias’ first entry to show biz was via Behn Cervantes’ “Sakada” in 1976. Two years later, he appeared in National Artist Lino Brocka’s “Jaguar,” where he won best supporting actor from the Manunuri ng Pelikulang Pilipino. He was also seen in the movie of another National Artist, Ishmael Bernal’s “Aliw,” released on the same year.