John Legend performed a concert from his Beverly Hills home on Instagram Live today, March 18 (Tuesday afternoon in Los Angeles), as the COVID-19 outbreak sees cities on lockdown and citizens staying at home.

Legend, wearing only a robe and no pants on, also shared the concert as an Instagram post, saying, “Social distancing is important, but that doesn’t mean it has to be boring. I did a little at-home performance to help lift your spirits.”

He called on artists Charlie Puth and Miguel to stage their own virtual concerts too.

Legend sang and played the piano for nearly an hour and was joined by his wife, model Chrissy Teigen, as well as their daughter Luna.

Teigen brought in humor and amusement to her husband’s sentimental performances. For instance, after the singer finished his first song, “Love’s in Need of Love Today” by Stevie Wonder, he shared an anecdote about auditioning for singer Lauryn Hill when he was a “nobody.”

“You’re still nobody,” Teigen is heard saying in the background.

When she did join him about 13 minutes into the concert, she was in a towel and turban and carrying a glass of wine. The towel was an outfit voted for by Twitter users prior to the show. 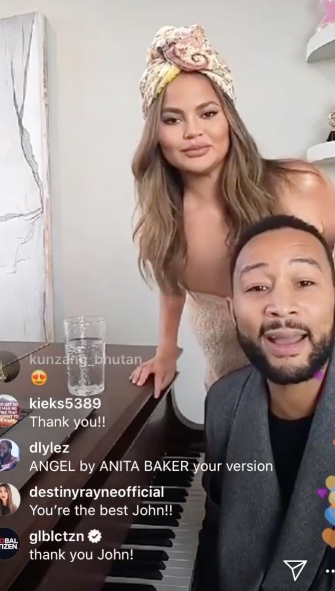 As Legend was taking requests, Teigen asked him to play “Everybody Knows,” “the song that you broke up with me to.”

“I did not break up with you to a song,” Legend said.

She shared that he broke up with her “for a minute, many years ago” and that she had to attend his shows while he was touring since she could not go home.

“He sang this song, and I was in the front row and I was crying because I liked this song a lot and he had just broken up with me,” she said. “I love this song but I also hate it.”

As he looked up the lyrics to the song, she quipped, “You don’t even know your own lyrics.”

While he sang, Teigen smelled her underarms and said she would need to get deodorant. She then said, “You guys always think the worst of me. Why would I need to do a deodorant ad?” before she and Legend jokingly plugged a brand.

He also played “Good Morning,” which he said was about “waking up and doing it.”

The live stream show attracted about 100,000 viewers, many of whom gave requests for the songs they wanted to listen to.

Legend’s performance is part of the “Together, at Home” music series from Global Citizen and the World Health Organization. Chris Martin of Coldplay kicked off the virtual concerts on Monday.

Artists who are also putting on their concerts from home include Pink, Keith Urban (cheered on by wife Nicole Kidman), and husband-and-wife tandem Katharine McPhee and David Foster.  /ra