Following in footsteps of Lea, Christina empowering for Moira 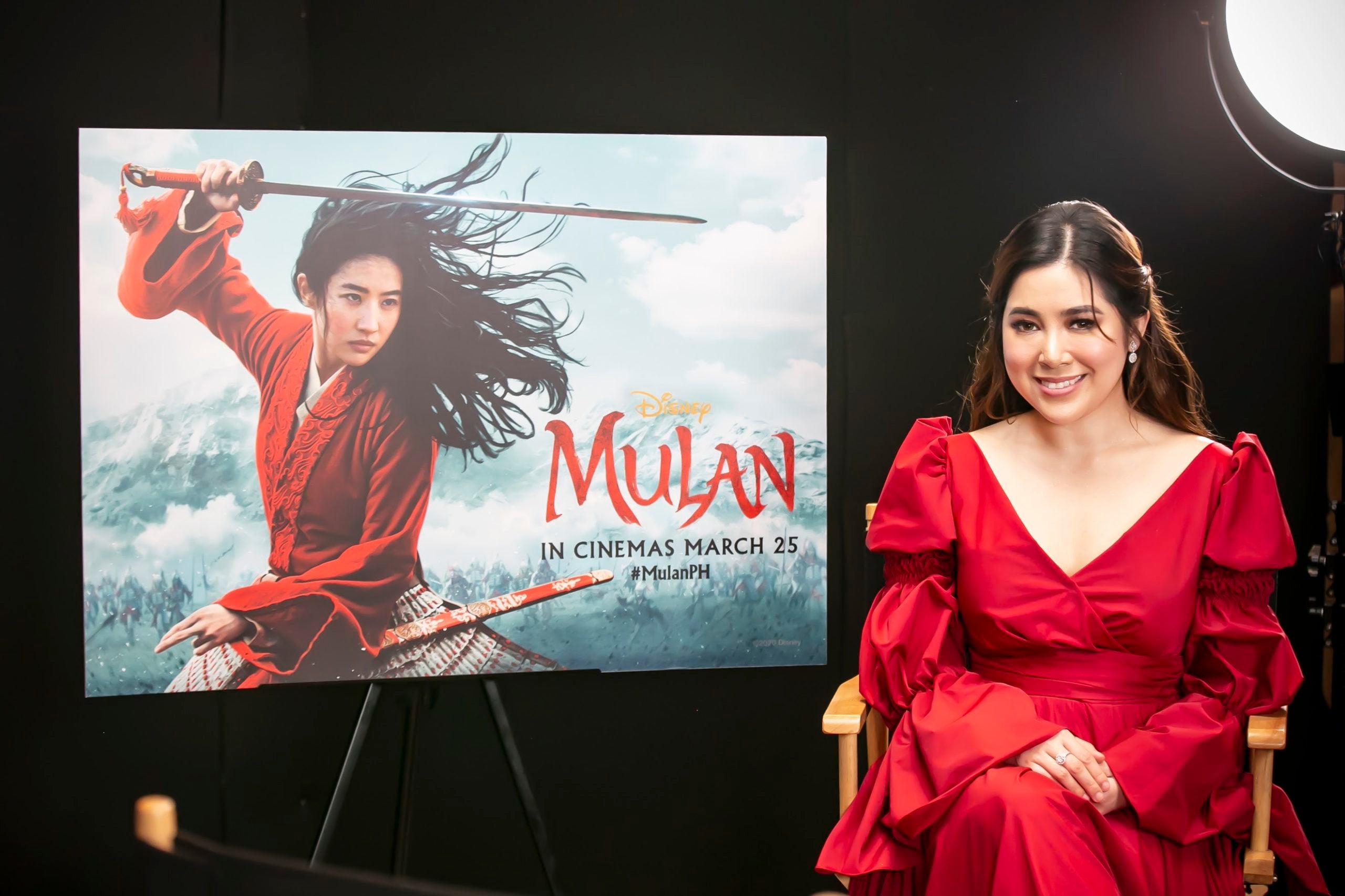 Getting asked to reintroduce a well-loved movie tune like “Reflection,” from the animated action-drama “Mulan,” is no easy feat.

But for Moira dela Torre, the country’s most-streamed solo artist, following in the footsteps of Lea Salonga and Christina Aguilera—who first breathed palpable musical life into the Disney song about identity and self-discovery in 1998—is as empowering as it is terrifying.

After all, “copying” Lea or Christina’s performing style and pretending who she isn’t is as real a struggle as doing something against her will.

“To be honest, I was initially terrified at the prospect of being compared to Lea and Christina,” she told Inquirer Entertainment at her launch as the latest Filipino voice behind “Reflection,” “But if there’s one thing that I learned from Mulan, Lea Salonga and Christina Aguilera, it’s being true to myself. They made it to that stage because they were true to themselves, and I feel empo­wered by that.

“I’m still scared, but I learn from every single project, no matter how big or small. Just the same, I am happy and feel blessed to be in a situation like this. When I first heard about the project, my reaction was like, what? How? It felt like a full-circle moment, because ‘Reflection’ was the first song I ever had to learn in full, because I had to sing it as a special number for our church’s second anniversary.

“The song was basically what opened the door for me to start loving music. For this to happen, it’s very cool and crazy. If you told me this last year, I wouldn’t have believed that I would get to work with Disney for something as big as this.”

We’ve already met Moira once before, when we were asked to sit as a judge last year for ABS-CBN’s annual Himig Handog songwriting tilt, where Moira and Daniel Padilla helped steer the lovely song “Mabagal” to victory.

And we’ve actually become fond of the way the songstress complements what appears like a fragile, timid nature with how she articulates her empowering thoughts and time-honed confidence.

Moira’s struggles with self-doubt and insecurity are as real as Mulan’s quest for identity—which are issues a lot of young people face in the often-cruel age of social media.

When we told Moira how her having come clean about anxiety and depression is bound to empower people who are going through the same thing, she was at a loss for words as she tried to get a hold of her emotions.

“Don’t make me cry,” she told us, almost in a whisper, as she wiped her eye.

We were charmed, of course—and almost sang portions of “Reflection” that, for us, felt like they were written specifically for Moira: Look at me/ You may think you see who I really am/ But you’ll never know me/ Every day, it’s as if I play a part/ Now I see, if I wear a mask I can fool the world/ But I cannot fool my heart. 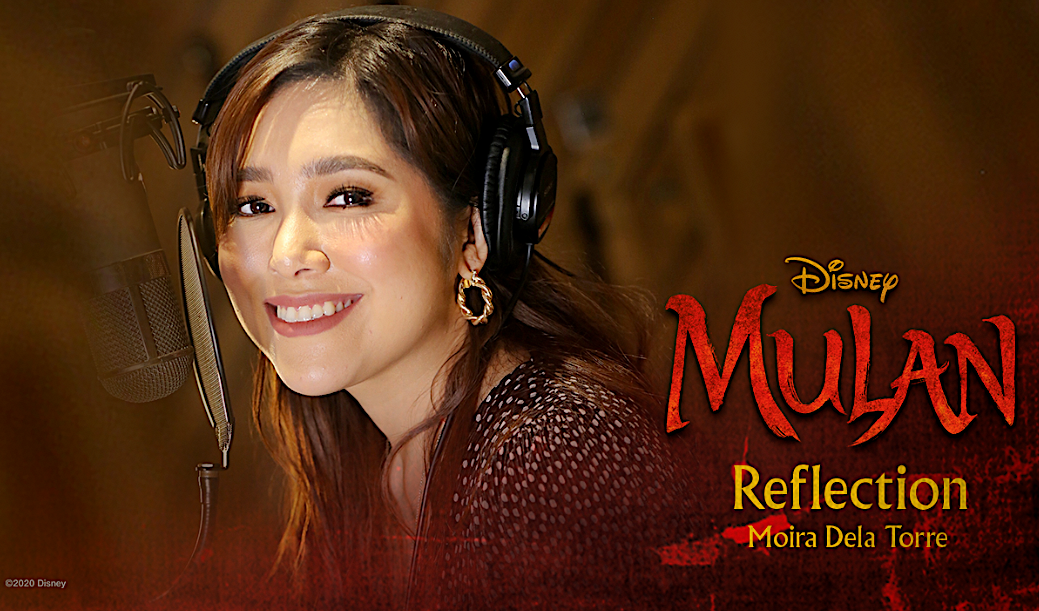 Excerpts from the Q&A with Moira:

Q: The music and the new movie are being released in time for the International Women’s Month. How do you feel now that people look up to you as a role model?

I feel more like an ate. There’s a huge responsibility that I have to uphold because I understand that it’s such a precious opportunity to be on a stage like this.

But I believe that one of God’s main reasons why He allowed me to be here is to show people that nothing is impossible, that dreams can come true for someone who grew up in Olongapo City, came from a broken family, hindi sumasayaw, hindi bumibirit, mahinhin. That’s what Mulan does—she inspires us to be true to ourselves. That’s something I grew up watching, and I’m seeing it now.

Q: Who were your idols growing up?

I was raised in church, so my mom didn’t really allow me to listen to secular music for a time. It was purely gospel, Lea Salonga and Disney for me. So, Mulan really is my favorite, no joke—I’m not trying to sound show biz or anything. Mulan was the [Disney] princess I felt most attached to.

Growing up, it wasn’t any celebrity I looked up to—it was my (maternal) lola, who was a writer (she finished journalism), a professor and a preacher. When my mom and dad separated and were busy fighting over me, it was my lola who did it all.

Mulan and Mrs. Doubtfire were our favorites—just little things to help keep me on a positive note, to keep me fighting. She made sure that I fed my mind with hopeful things.

Q: Were there specific instructions about how you were supposed to sing the song, given how protective Disney is of its property?

I was actually expecting to be given a lot of rules. But when I got to the studio, they just said, “We just want Moira.”

Q: After all, you are the Philippines’ most streamed solo artist…

Thank you, but I didn’t really know “how to be Moira.” Can I just say how I love the Disney team, because they’re all so empowering?

They just encourage you and get the best out of you. When I was recording, that feeling of being inadequate and terrified just went away, because I was reminded to just be myself.

Q: Mulan was a warrior. How do we relate that to your personal battles?

Which war? I have a lot of wars in my head! I’m battling depression and anxiety. I have gotten better—it’s a step-by-step process every day. It’s about making a conscious effort not to let the lies and outsiders get the best of me.

It’s hard. It’s a battle a lot of celebrities have to go through, but I know we’re conquering it because we are slowly learning to be more authentic in our industry. I love it, because we’re all growing together.

Q: Did it get better with fame and fortune? Hasn’t success helped? A lot of people aspire for the kind of success you’re enjoying now.

Well, it only got worse. Because I never expected to attain the fame that I have now. I just wanted to share songs and inspire hope. I’m thankful for all the many stages I was able to set foot on. I honestly thought that achieving goals will change a lot of things, but the more you love, the more you’re afraid.

With me, I’m most afraid of not being genuine, of being used to just “doing it,” of being used to performing onstage and not caring about the way other people feel, and just wanting to do my job. I haven’t reached that yet, but I’m scared that as I go further into this journey, I would be just like a lot of people who have gone down that path. That’s something I’m protecting.

That’s also something my lola always tells me. She said, “No matter what stage you get on, make sure you never forget your calling.” Kasi, kapag tuluy-tuloy at sunud-sunod lahat, sometimes it gets robotic.

But somehow, I think my anxiety has become a blessing in disguise, because it keeps me in that place where someone else’s feelings are to be considered all the time. So yes, I know that it has also gotten better.