LONDON – Robin Gibb, singer with the legendary British band the Bee Gees, is in a coma in hospital after contracting pneumonia in his battle against cancer, his official website confirmed Saturday. 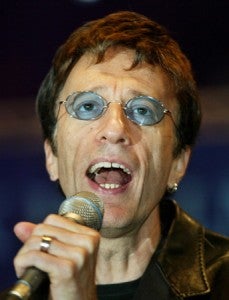 “Sadly the reports are true that Robin has contracted pneumonia and is in a coma. We are all hoping and praying that he will pull through,” said a brief statement on RobinGibb.com.

British media reported Saturday that the 62-year-old was at a hospital in Chelsea, west London, where wife Dwina, his three children and brother, Barry – also of the group – were keeping a bedside vigil.

Gibb, part of one of the biggest-selling groups of all time, had bowel surgery 18 months ago for an unrelated condition but a tumour was found and he was diagnosed with cancer of the colon and the liver.

Back in February, Gibb said he had made a “spectacular” recovery from his treatment, sparking hopes that his cancer was in remission, but he has since experienced a sharp deterioration.

Gibb was too ill to attend Tuesday’s premiere of his first classical work, “The Titanic Requiem”, composed with his son Robin-John Gibb to commemorate the 100th anniversary of the sinking of the luxury liner on April 15, 1912.

The work, recorded with the Royal Philharmonic Orchestra, took more than two years to complete.

Gibb had been due to perform in person the song “Don’t Cry Alone” at the premiere, staged at the Central Hall Westminster in London.

“The one place he really wanted to be in two and a half years he couldn’t be and it was heartbreaking,” his son RJ Gibb told BBC television on Thursday.

“He’s still in hospital. He’s fighting a lung infection. As a lot of people who’ve had family members or friends who have been through a cancer bout know, there are a lot of periphery problems afterwards that you have to deal with.

“He will have to keep scrutiny on this for his entire life and, God willing and we’re all praying for him, he comes through and makes a speedy recovery.”

The Bee Gee underwent surgery for an ongoing problem with a twisted intestine in 2010.

The same hereditary condition led to the death of his twin brother Maurice at the age of 53 in 2003, while younger brother Andy died in 1988 following a battle against cocaine addiction.

Barry, Maurice and Robin Gibb scaled the heights of the pop world in the 1970s with disco hits including “How Deep Is Your Love”, “Stayin’ Alive”, and “Night Fever”.

The band notched up record sales of more than 200 million following their first hits in the 1960s.