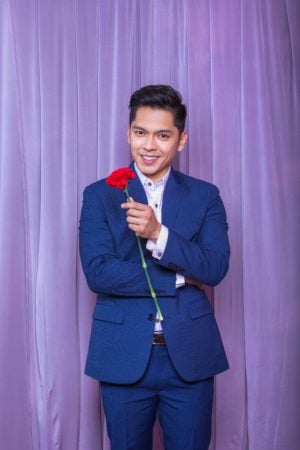 If he would have it his way, Carlo Aquino said he would like to regain Angelica Panganiban’s friendship.

The onscreen partners, popularly known as “CarGel,” had a falling out while they were working on the family-oriented TV series “Playhouse” in 2018.

“I want our friendship restored. Sayang kasi. Angelica is a good and kind person,” Carlo told reporters during the renewal of his contract as endorser of the cosmetic brand Beautederm. He is now promoting its new line of products called Spruce & Dash.

The actor said they would say hello whenever they’d bump into each other on ABS-CBN grounds. “We’re civil,” he added. “There’s no awkwardness, at least on my part, because Angge (Angelica’s nickname) and I have known each other for a long time.”

Carlo also said he doesn’t mind working with Angelica again. “I just don’t know whether our bosses or the audience would like that or would have violent reactions. I think [a reunion project] is possible, but not in the near future,” said Carlo, who also did the hit romantic drama “Exes Baggage” with Angelica. “No regrets. We were happy when we were working together on that mo­vie,” he added.

The actor was then asked whether Trina Candaza, his girlfriend of a year, would get jealous of his closeness to Angelica. Carlo said “never,” but then added that what they had to deal with where the bashers.

“She used to get upset because of them; but not anymore. She used to show me negative posts and would say, ‘’Di pa rin tumitigil!’ I told her what else can they do other than post mean things about us? They’re angry while we’re very happy,” Carlo pointed out. “I would always remind her that what other people are saying isn’t important. What matters is that we love each other and that we’re happy together.”

Carlo said he now preferred to have a girlfriend who is not from show biz “because the relationship is more peaceful, except when you guys keep asking questions about it,” he told reporters.

As to whether or not his supporters should expect him to settle down soon, Carlo replied: “I’m already 34. Of course, I think about that now. But it’s all about finding the right person and feeling that it’s finally the right time for it. As of now, I know that she’s the one, but the moment [for me to propose to her] hasn’t arrived yet. I still don’t know. It could be anytime soon.”

As for his dream wedding, it would have to be on a mountaintop. “This is because I love nature. I enjoy mountain climbing,” said the cast member of the action-drama series “A Soldier’s Heart.” “As to when this will happen, you will all know soon enough.”