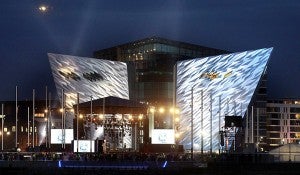 BELFAST — Some 16,000 people packed the Belfast slipways where the Titanic was built for a free, open-air concert Friday ahead of the 100th anniversary of the luxury liner’s sinking.

The biggest, most ambitious ship of the age hit an iceberg on its maiden voyage across the Atlantic Ocean from the British port of Southampton to New York, sinking in the early hours of April 15, 1912.

The concert was held in the shadow of the world’s biggest Titanic visitor attraction, which opened in the ship’s birthplace last month, 100 years to the day since the doomed liner was completed.

The attraction, which has risen from the derelict Harland and Wolff shipyards, tells the story of the liner from its inception in Belfast’s industrial boom years through to its launch, its sinking and the aftermath.

The six-level, aluminium-clad building is in the form of four Titanic-sized prows, three of which can be seen shimmering from any one viewpoint, representing Titanic and its two sister ships, Olympic and Britannic.

While the concert mood was upbeat, a more sombre tone will be set over the weekend as the city that built Titanic commemorates the anniversary of the disaster.

It was a return to the Northern Irish capital for MTV, which also held its Europe Music Awards in what Belfast now calls its Titanic Quarter, at the Odyssey Arena.

Few major international acts used to perform in Northern Ireland during the Troubles, the three decades of sectarian violence between Protestants and Catholics in the province, which largely ended with the 1998 peace accords.