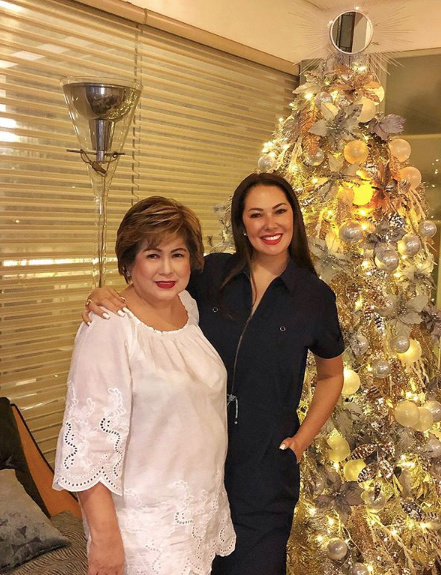 Annabelle Rama has long been at odds with daughter Ruffa Gutierrez on her love life. Image: Instagram/@iloveruffag

Mother knows best, so the saying goes, and it frustrates Annabelle Rama when her children do not listen to her advice.

Rama was a no-holds-barred guest in an episode of “Gandang Gabi Vice” that aired on Sunday, Feb. 16.

In the segment “Sagot o Lagot,” Vice dared Rama to give away a piece of jewelry to a member of the audience if she refused to answer a personal question. The comedian asked Rama what Gutierrez’s biggest wrongdoing was toward her.

(Ruffa is kind. I love her, of course, because she’s my only daughter. But she defies me on what I do not want.)

(First of all, I told her to find a boyfriend who will provide for her kids and her. She does not need to work because she is smart and beautiful. She is not stupid. What I don’t like, when it comes to men, is she really is stupid.)

Rama and her daughter have long been at odds about her love life. When Gutierrez guested on “GGV” in an episode aired on Feb. 2, she pranked her mom via phone call, telling her that she had been cheated on. “I told you before pa iwanan mo (you should leave him),” Rama immediately told her shocked daughter.

Gutierrez has been in a relationship with French-Israeli Jordan Mouyal. She confirmed they were dating in 2014 on “Aquino & Abunda Tonight” after she and her mom had been feuding about him.

The actress was previously married to Turkish businessman Yilmaz Bektas, with whom she has two daughters. She has been open about the domestic abuse he had allegedly inflicted on her.  Niña V. Guno /ra

Ruffa Gutierrez’s daughters open up on relationship with dad