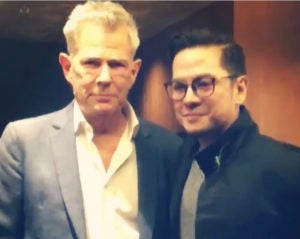 Little did he know that he would end up singing on that very stage that evening.

“Midway through the set, David began looking for audience members who could sing. The Japanese fans seemed quite shy and reserved. No one was volunteering. And so I thought, ‘Why not give this a shot?’” he told the Inquirer in an interview.

Joaquin, a two-time gold medalist at the World Championships of the Performing Arts, sang the James Ingram’s ballad “Just Once,” because he thought it would be something the Japanese crowd would be familiar with.

“I wasn’t really myself that time. I was trying to soak in the moment and the fact that I’m on the stage with David,” said Joaquin, who has shared the stage with the popular soft-rock duo Air Supply in a previous Manila concert.

David was impressed. He motioned to Joaquin to conti­nue singing, but he was so flustered he didn’t realize it.

“And so, I just finished my performance,” Joaquin said, adding that seeing and hearing the Japanese crowd’s applause was more than enough.

After the show, David invited Joaquin backstage to have a chat and play some more music.

“He showed me the dressing room, and Brian, as well as other foreign artists, were also there. I couldn’t believe it!” Joaquin recounted. “We sang back there again because he wanted me to do something he wasn’t able to tell me when we were onstage.”

David was also generous enough to offer Joaquin some valuable advice. “He reminded me that I should never stop listening or heeding the advice of people who have my best interests, people who will guide and educate me,” he said. “He stressed that more than the singing technique, it’s important that every word that comes out of you is from your heart. The feelings should be genuine.”

Joaquin recently bagged trophies at the recent 11th Star Awards for Music, including revival recording artist of the year for his cover of the ballad “Don’t Know What to Say (Don’t Know What to Do).” He is currently working with PolyEast Records for his upcoming singles.