What the Oscar winners said backstage, and why I suddenly remembered Kobe Bryant 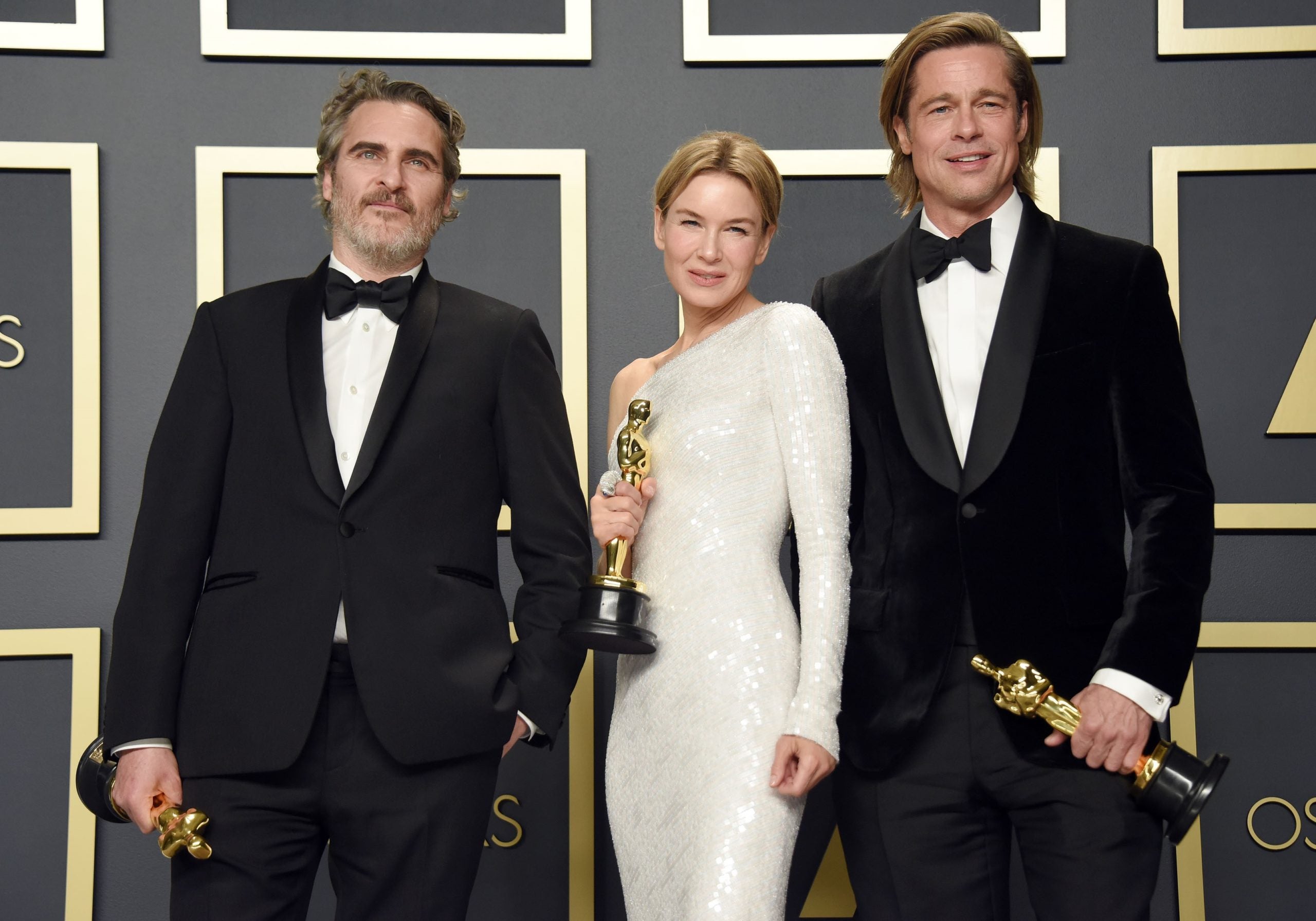 LOS ANGELES—The cheers that greeted Elton John when he strolled into the press room backstage at last Sunday’s Oscars reminded me of the similar enthusiastic reception that Kobe Bryant got last year.

It was a sad reminder that we have lost Kobe a year after he won his first Oscar, which he shared with Glen Keane, for best animated short film, “Dear Basketball.” It was the last time I saw the basketball legend, beaming in a tuxedo. That night, according to IMDb, Kobe became “the first African-American to win the Academy Award for best animated short film. Additionally, he became the first former professional athlete to be nominated and win an Oscar in any category.”

The assembled journalists from around the world also reacted enthusiastically when “Parasite” began winning its historic, glass-ceiling shattering series of four awards—best international feature, original screenplay, director and picture. But the room erupted in wild cheers when Bong Joon-ho won best original screenplay and went even wilder in its applause when “Parasite” bagged its precedent-setting best picture prize.

The following are excerpts from some of the winners backstage at the 92nd Academy Awards in Hollywood. 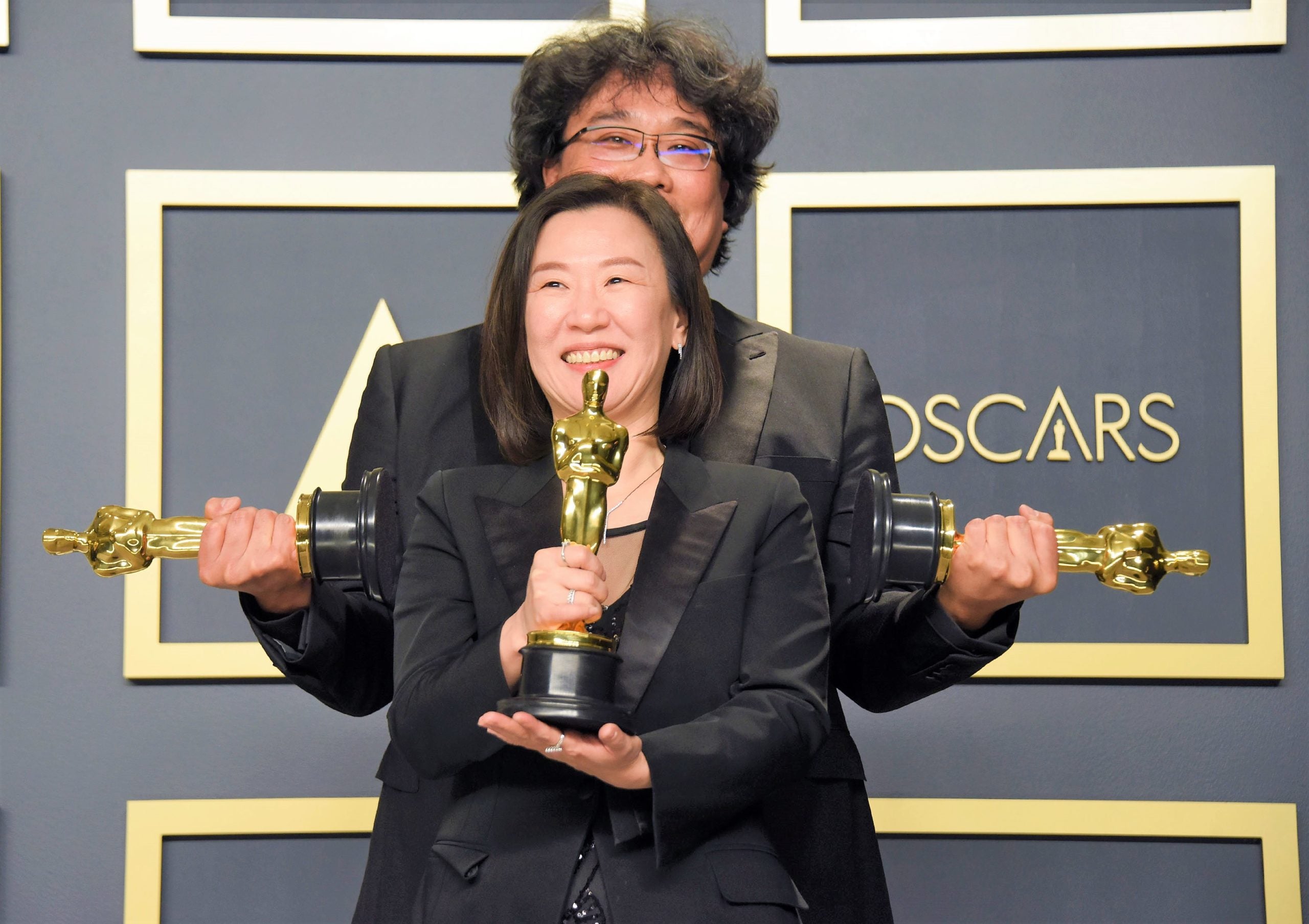 Speaking alternately in English and Korean (translated by his interpreter, Sharon Choi, who has become an “MVP” in this awards season, and she’s writing her own script!):

I feel like something will hit me and I will wake up from this dream. It’s literally f**king crazy.

I just did what I’ve always done with great artists, with producer Kwak (Sin-ae), my cowriter Jin Won-han and all my actors. It was the same process making this film, but we’ve had these amazing results. It still feels very surreal.

But I did once imagine what it would mean to win best picture. To win best picture means that this film was voted by the members of the Academy, and I realized that would signal the beginning of a different kind of change for international cinema, not just for Korea. 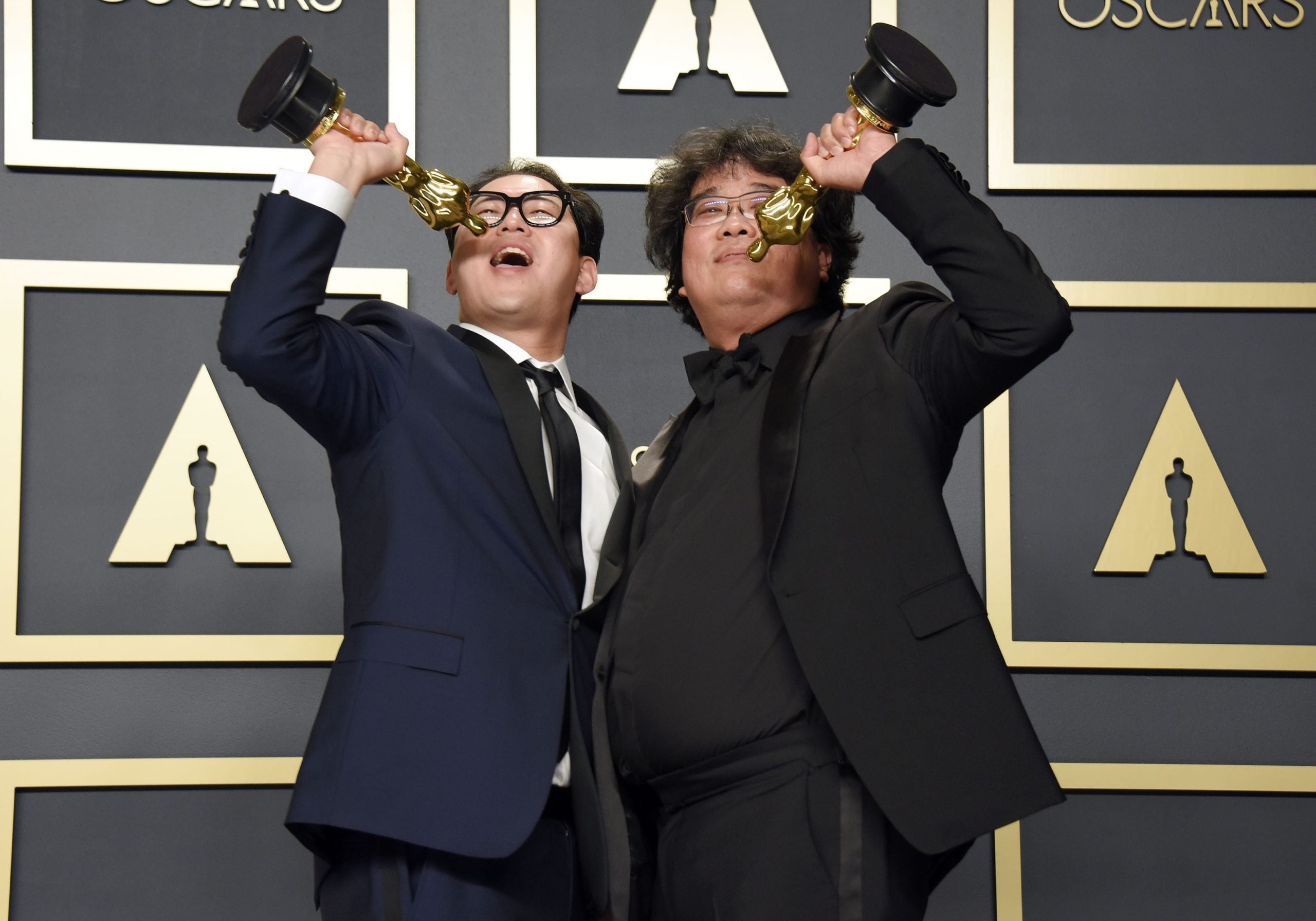 During the Golden Globes, I mentioned the one-inch barrier of subtitles, but I feel like that was already a little late. People were already overcoming these barriers. There are streaming services, YouTube, social media and the environment that we currently live in—we’re all connected.

So naturally, we will come to a day when a foreign-language film winning this won’t be much of an issue later on, hopefully.

I don’t think it’s necessary to separate all the borders and divisions, whether it’s Asia, Europe or the US. If we pursue the beauty of cinema and focus on the individual charms that each piece has, then we will naturally overcome all these barriers.

Brad Pitt, best supporting actor (“Once Upon a Time in Hollywood”)

On whether he is having the time of his life:

Well, no. I hope not. I hope I got other s**t going on. But it has been a really special run. And, again, it’s a community I love and friends that I’ve made over 30 years and they mean a lot to me, truly. And I feel a responsibility to that more than anything, more than a victory lap.

On how the award is different from the first one she won in 2004 (best supporting actress, “Cold Mountain”), and how she has changed since then:

Oh, my goodness, how much time do you have? Well, at the time, I was so busy that I wasn’t actually in the moment. I had just flown home from something for “Bridget Jones 2” (“The Edge of Reason”). It’s a different perspective. I’m a little more present now. The time away and the time in between have helped me appreciate it in a different way.

This is about wanting to tell the story, to celebrate Judy Garland and shine a light on the nuances of the circumstances of her life, which people dismiss as tragic. The opportunity to tell a story that challenges that narrative and says, “Oh, no, no, you can’t know how extraordinary a person is until you know what they struggle with and what they overcome.” To me, that’s what this is. 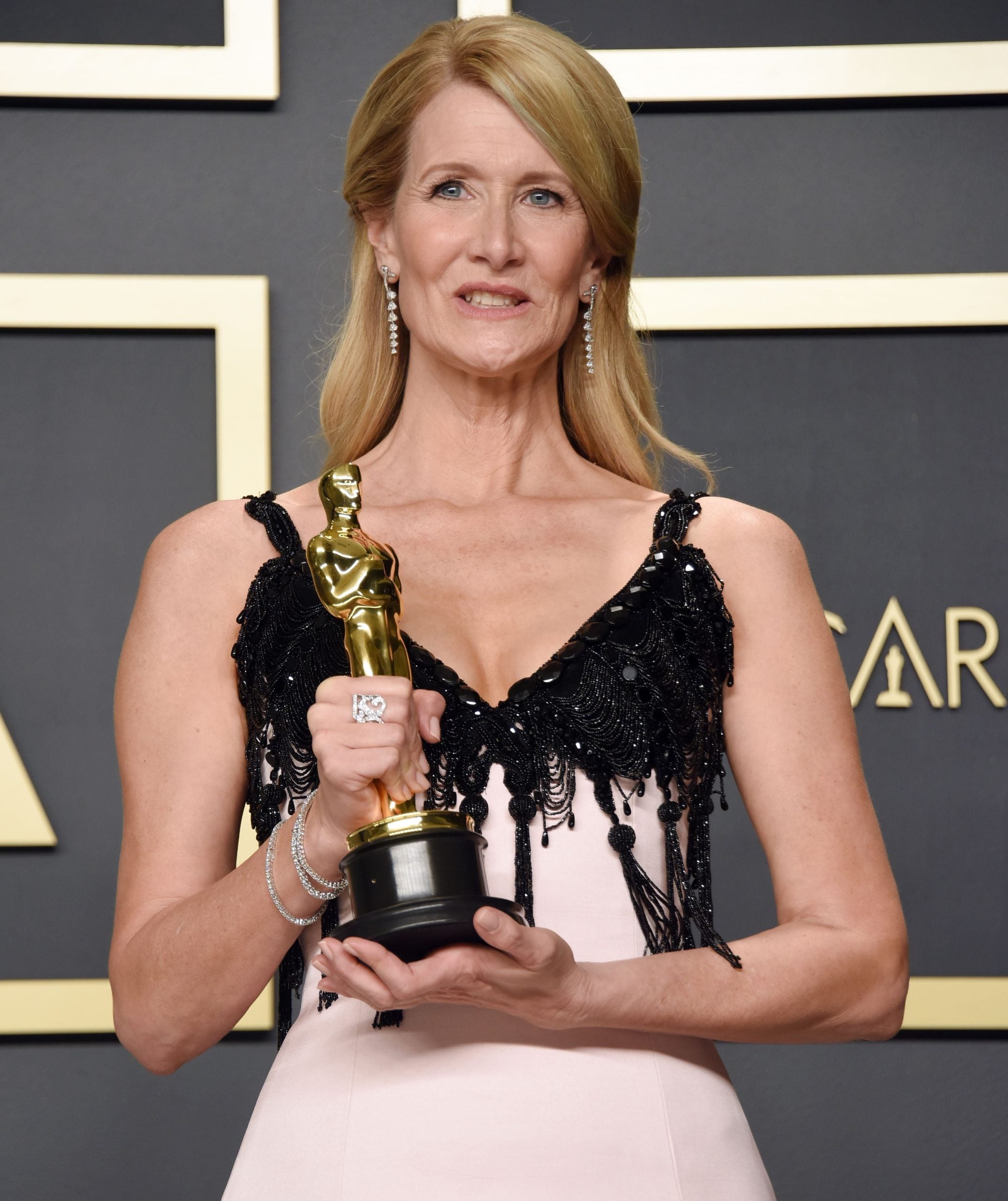 On playing confident characters in “Marriage Story” and other recent projects, her inspirations and her message to young girls:

I start with my mother (Diane Ladd), and my godmother, Shelley Winters (both actresses), who were massive influences on my life as an actor and activist, and to be loud, be proud, stand by incredible sisters. I have been blessed to have extraordinary roles.

A journalist said, “Wow, this year, you’re playing powerful women versus … indigent addicts,” or some other reference. I said, “Because there are women in positions of power to play now. But five years ago, I probably wouldn’t have gotten to play a leading divorce lawyer or a CEO of a major tech company because they weren’t in those positions.”

So there are many more exciting roles to play, and the future generations are going to be the ones that lift us up and show us because they know it’s their role, not because they are going to ask for permission. They’re just going to do what they love, and bless them for showing us the way. 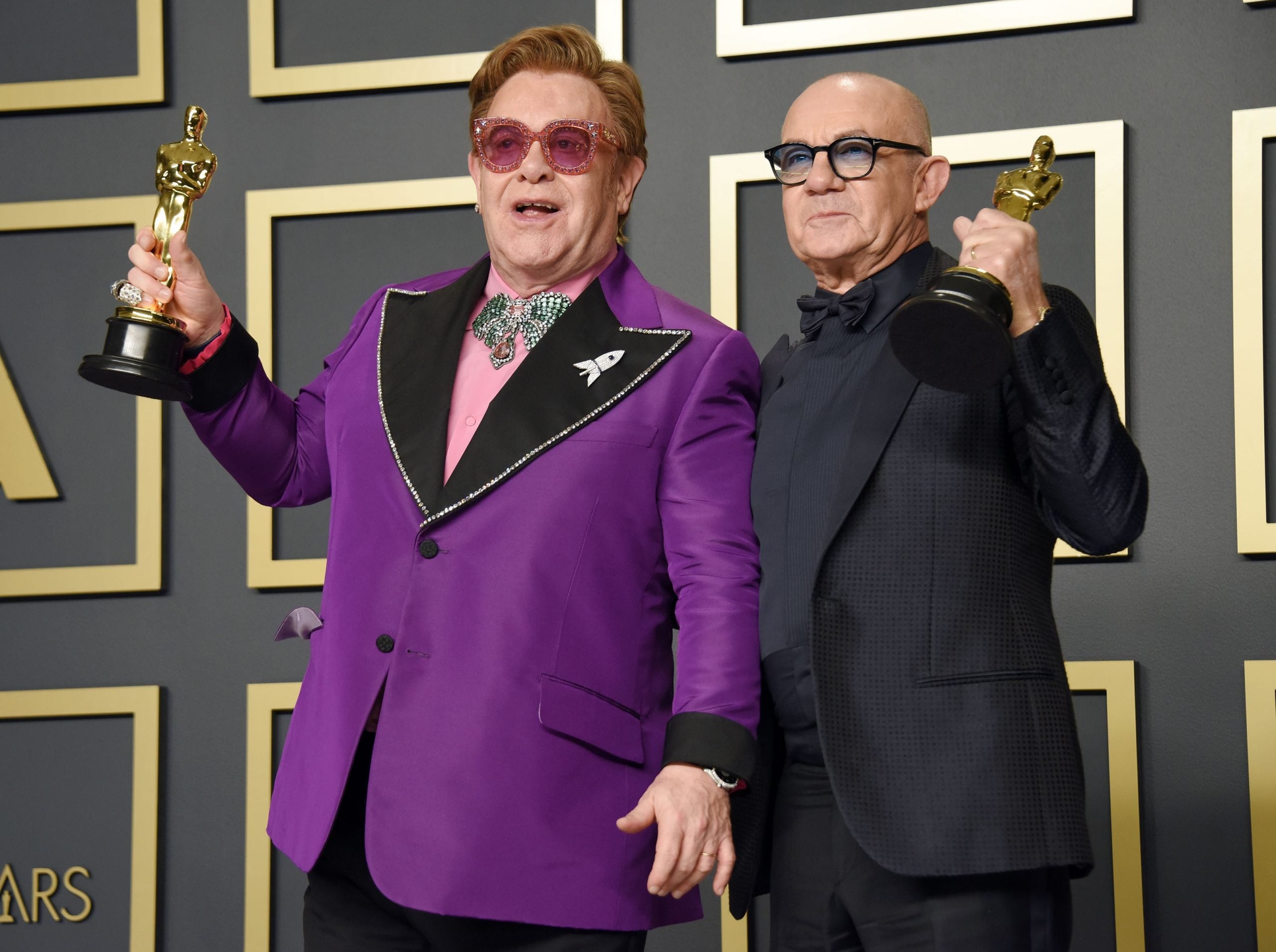 Elton JohnOn Bernie, his songwriting collaborator for many years:

This is for my (songwriting) partner of 53 years, (Bernie). Without him, I wouldn’t be here. He starts the process. He gives me the lyrics, then I go ahead. Without the lyrics, I’m nobody. This is the man who started the journey, and we’re still together after 53 years.

Bernie TaupinOn Elton and their working relationship and friendship portrayed in “Rocketman”:

What you see in the film is what you get. The basic whole underlying storyline in that movie is the real thing, even though there are fantasy elements to it. The basic theme of the whole movie is love, trust and believing in the person you’re working with. It’s like a marriage, you know? It really is.

And one of the things that make it work is being different, leading different lives. But we always come back together for the music.

The actor did not go to the press room, but his moving acceptance speech bears repeating here:

God, I’m full of so much gratitude right now. I do not feel elevated above anyone in this room because we share the same love, the love of film, and this form of expression has given me the most extraordinary life. I don’t know what I’d be without it. But the greatest gift that it has given me is the opportunity to use our voice for the voiceless.

We’re talking about the fight against the belief that one nation, one people, one race, one gender or one species has the right to dominate, control and exploit another with impunity. We’ve become disconnected from the natural world, and many of us, what we’re guilty of is an egocentric worldview, the belief we’re the center of the universe. We go into the natural world and plunder it for its resources.

We fear the idea of personal change because we think that we have to sacrifice something to give something up, but … when we use love and compassion as our guiding principles, we can create, develop and implement systems of change that are beneficial to all sentient beings and to the environment.

I have been a scoundrel in my life. I’ve been selfish, I’ve been cruel at times, hard to work with, and I’m grateful that so many of you in this room have given me a second chance. That’s when we’re at our best, when we support each other, not when we cancel each other out for past mistakes, [and] when we guide each other toward redemption. That is the best of humanity.

When he was 17, my brother (the late River Phoenix) wrote this lyric, he said: “Run to the rescue with love and peace will follow.” Thank you.