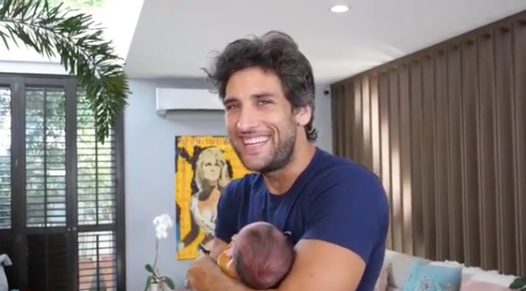 Solenn Heussaff apparently allowed Nico Bolzico to finally introduce Thylane to the public, and it turned out that the baby mostly got her looks from the father.

“The moment you all have been waiting for, after permission from @solenn granted, here is #Thylane!!!!!!!” the father said on Instagram yesterday, Feb. 7. “As you can see she really looks like #ElPadre.”

Bolzico started the “reveal” video with him carrying the baby girl in his arms and his friend Gran Berta holding the microphone.

The camera then moved to Thylane’s “face,” which looked exactly like her father—Bolzico’s face was just edited onto the baby’s. Thylane then proceeded to utter her first words, “Gran Berta,” causing the father to walk out angrily from the scene.

Bolzico previously showed Thylane’s actual eye, explaining that he only did so because “if I show her @solenn will eradicate me from the world!” He posted the snippet on Instagram on Jan. 31.

“Best and most exhausting 31 days of our life! We [didn’t] know we were capable of so much love,” the doting father noted.

“Many lessons learned, but the most important is that we, men, are not only useless during the pregnancy but also after (at least the first 31 days)! We are simply decoration! Just be fully supportive and do everything your wife tells you to do without asking why!” Bolzico added.

Thylane, who was born last New Year’s Day, is the first child of Heussaff and Bolzico. Heussaff’s brother Erwan will also have his first child with wife, Anne Curtis, this year. /ra