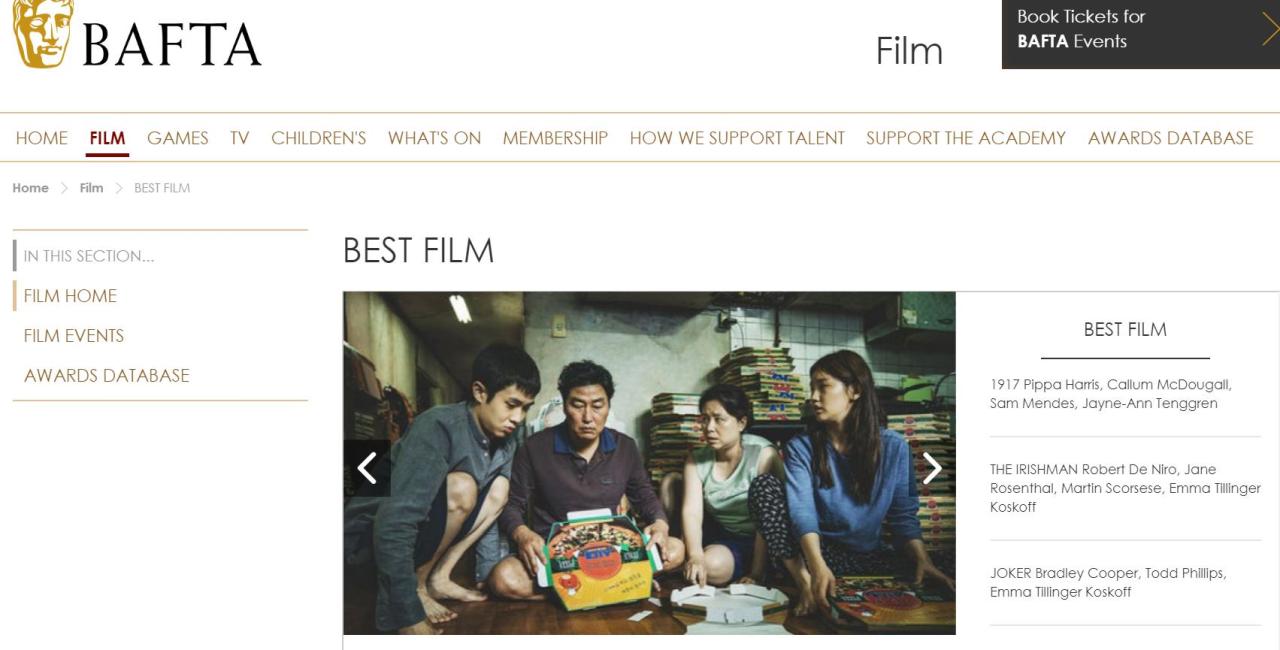 Screenshot of BAFTA via The Korea Herald/Asia News Network

In the nominations for the 2020 BAFTA Film Awards, slated for February, the South Korean film was listed in the categories of best film, best director, best original screenplay and best film not in the English language.

For best film, the family satire will compete with “1917” by Sam Mendes, “The Irishman” by Martin Scorsese, “Joker” by Todd Phillips and “Once Upon a Time in Hollywood” by Quentin Tarantino.

Along with “Parasite,” “Booksmart,” “Knives Out,” “Marriage Story” and “Once Upon a Time in Hollywood” are up for best original screenplay.

In the best non-English language film category, “Parasite” will contend with “The Farewell” by Lulu Wang, “Pain and Glory” by Pedro Almodovar, “Portrait of a Lady on Fire” by Celine Sciamma and “For Sama” by Waad Al-Khateab.

“Joker” earned 11 nods, including best film, followed by “The Irishman” and “Once Upon a Time in Hollywood” with 10 each.

In the 2018 BAFTA awards, South Korean director Park Chan-wook’s “The Handmaiden” won the best film not in the English language.

It won the best foreign language film honor at the Golden Globes Awards on Sunday, following a series of trophies bestowed by US film critics associations.

The BAFTA awards ceremony, which is seen as an important indicator for the Oscars, will take place at the Royal Albert Hall in London on Feb. 2. Yonhap