Barack Obama unveils his list of best music from 2019 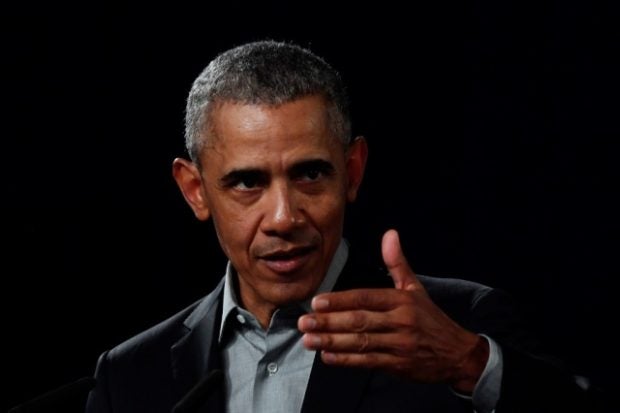 After revealing his favorite films, TV shows and books from 2019, Barack Obama completed his annual roundup with his musical highlights of the past 12 months.

Obama shared on social media his wide-ranging playlist for 2019, which blends smash hits like Lizzo’s “Juice” with more under-the-radar picks.

“From hip-hop to country to The Boss, here are my songs of the year. If you’re looking for something to keep you company on a long drive or help you turn up a workout, I hope there’s a track or two in here that does the trick,” he wrote along with the list of his 35 picks for the year.

Among them are hits at the center of all sorts of year-end selections like Ozuna’s star-studded “Baila Baila Baila (Remix),” Lil Nas X’s “Old Town Road” remix with Billy Ray Cyrus and Rosalía’s “Con Altura”.

In August, Obama shared a “summer playlist 2019” with 44 catchy songs, which range from Drake’s “Too Good” featuring Rihanna to Van Morrison’s “Brown Eyed Girl” and Ella Fitzgerald’s “How High the Moon”.

With summer winding down, here’s a sampling of what Michelle and I have been listening to — some new, some old, some fast, some slow. Hope you enjoy. pic.twitter.com/BS5ri1lvxz

Unlike his previously shared books and film/TV series, Obama’s best music picks are all included in a Spotify playlist.

Discover the playlist of Obama’s 2019 musical favorites below:

Last June, Barack and Michelle Obama announced that they signed a deal with the Swedish streaming platform to create a series of exclusive podcasts through their production company Higher Ground Audio.

“We’re thrilled to have the opportunity to amplify voices that are too often ignored or silenced altogether, and through Spotify, we can share those stories with the world. Our hope is that through compelling, inspirational storytelling, Higher Ground Audio will not only produce engaging podcasts, but help people connect emotionally and open up their minds — and their hearts,” the former First Lady said in a statement, without providing details on specific projects. NVG

Barack Obama shares his list of favorite books from 2019

Read Next
Netflix US: More people watched ‘Murder Mystery’ than any other 2019 release
EDITORS' PICK
What to watch out for when selecting a video surveillance solution
House energy committee chair Arroyo bats for cheap electricity
Look Through: The fate of impounded stray dogs
23,000 cops to be deployed nationwide for school reopening
Unleash the photographer in you this World Photography Day with vivo smartphones
DOH says COVID-19 cases plateauing, but public shouldn’t be ‘complacent’
MOST READ
Sharon Cuneta asks for prayers for friend in ICU who suffered silent stroke
Korina Sanchez reunites with former ABS-CBN co-anchors Julius Babao, Cheryl Cosim
Secrets and lies
Solons file resolutions seeking probe on ABS-CBN, TV5 merger
Don't miss out on the latest news and information.