My ‘Filipino connection’ pays off

Happy Easter! In a recent interview, actor Gael Garcia Bernal mentioned the Philippines in his reply about Easter celebration in his native Mexico: 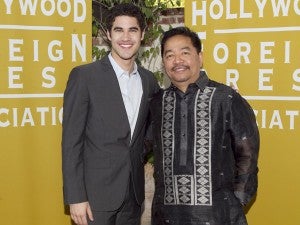 Darren Criss is one of the talents of Filipino heritage featured in columnist Ruben V. Nepales' first book, "My Filipino Connection: The Philippines in Hollywood" to be launched on Tuesday, April 10, 5:30 pm at Powerbooks, Greenbelt 4, Makati. Photo by John Salangsang

“Easter reminds me of my days as a kid growing up in Guadalajara and Mexico City. We went to little towns where there was a great procession. It’s a big celebration. But I heard that Easter celebration in the Philippines is far more dramatic!”  More about Gael in a coming column.

I am now in the Philippines to launch my first book that I’ve been working on for many months — “My Filipino Connection: The Philippines in Hollywood.” My “booky wook” (as actor Russell Brand would say) is a collection of mostly published pieces of my interviews with talents of Filipino heritage based in the US and Canada, who are all making headway in the American scene, especially in Hollywood.

It wasn’t easy working on “My Filipino Connection” on top of my crazy schedule, so I look forward to sharing this book with you, dear readers. It has been my “delicious” secret for several months, as I compiled and updated the pieces, and traded countless e-mails with the good folks at Anvil Publishing Inc., the book’s publisher. Writing about Filipino talent here is my passion, so over the years I’ve written countless of stories on the topic.  It was tough to whittle down the book’s subjects to 23. I’m praying for the book’s success so I can feature more stories in a second book.

Featured in this first book, which was edited by Emmie G. Velarde (also my PDI editor) are the inspiring stories of the following:

Tony DeZuñiga, the pioneering artist at Marvel and DC Comics, who drew virtually all the superheroes in an impressive career that began in the 1960s. Tony will be one of my special guests at the book launch on Tuesday, April 10, 5:30 p.m. at Powerbooks in Greenbelt 4, Makati.

Darren Criss, the hot “Glee” actor who took over Daniel Radcliffe’s role in a limited three-week run on Broadway’s “How to Succeed in Business Without Really Trying” last January. My piece on Darren, one of the most genial, articulate young actors you’ll ever meet, has not been printed before, so it’s the book’s extra treat. It’s an extensive interview about his Filipino roots and many other facets about the actor. Darren recently accepted a $25,000 donation check from our group, the Hollywood Foreign Press Association, on behalf of Unicef Philippines to help in the latter’s long-term recovery programs for Filipino children and families affected by Storm Sendong.

Charice Pempengco, the international singing sensation, opened up on several topics in my chat with her.

Ronnie del Carmen, Ricky Nierva and Gini Cruz Santos— three of the many talented “Pixnoys” (Filipinos working at the animation powerhouse, Pixar). These artists are among Pixar’s key behind-the-scenes talents in such films as “Up,” “Finding Nemo,” “Wall-E,” “Ratatouille,” “Toy Story” and “Monsters Inc.”

Ronnie has stepped up—he’s co-directing a still untitled Pixar movie that will take filmgoers “to a place that everyone knows, but no one has ever seen: the world inside the human mind.” That’s a very significant step for a Fil-Am talent.

Hailee Steinfeld, who earned a best supporting actress Oscar nomination in her movie debut, the Coen brothers’ acclaimed “True Grit.” For the first time, Hailee spoke in detail about her Filipino heritage stemming from her mother Cheri’s side of the family, the Domasins of Bohol. The young actress, who’s starring in a new version of “Romeo and Juliet,” shared a fascinating trivia about her uncle’s connection to Hollywood in the book.

Vanessa Hudgens, whose Filipino roots are also on her mom Gina’s side, revealed how she cherishes her heritage, especially the Filipino’s passionate nature, and cited boxing champ Manny Pacquiao as an inspiration.

Matthew Libatique, the cinematographer whose many honors include an Oscar nod for “Black Swan,” traced his family origins to Pangasinan and Quezon. This year, Matty is working with frequent collaborator Darren Aronofsky on an epic film about Noah’s ark. But here’s even more exciting news: Depending on his schedule, Matty may work with director Raya Martin in a film, produced by Arleen Cuevas, to be shot in Mexico next year.

Ramona Diaz, the acclaimed documentary filmmaker, is scheduled to debut what could be her latest triumph, a film on Arnel Pineda and Journey, at New York’s Tribeca Film Festival this month.

Alec Mapa, in case you haven’t heard of him, is a witty, funny Filipino-American who has appeared on Broadway, TV (“Desperate Housewives,” “Ugly Betty”) and in film. When he co-hosted as guest a morning TV talk show, Alec had Whoopi Goldberg in stitches. That’s how hilarious Alec can be.

Anna Maria Perez de Tagle started out being known as the granddaughter of the great Philippine show biz icon, Sylvia La Torre. But with Anna Maria’s well-praised Broadway debut on “Godspell,” as well as TV and film credits, she is on her way to making a mark on her own.

Bernardo Bernardo and Bessie Badilla, whom I call BB West and BB East, respectively, are two of my favorite people on earth. Since he moved to what he calls the “United Snakes of America,” BB West has been writing a new chapter in his life by winning acclaim anew as an actor, director, host and performer and, on the side, self-proclaimed “ambulance pusher” (he’s the marketing director of an ambulance company).

BB East, on the other hand, is also marking a new page in her life, successfully transforming herself from an international model and actress to a producer of award-winning indie films and singer of a fusion of Brazilian and Filipino music.

The Filipino-American Symphony Orchestra (Faso), the first symphony orchestra outside the Philippines, was singled out by Philippine Daily Inquirer editor-in-chief Letty Jimenez-Magsanoc as an example of the Fil-Am subjects I am passionate about in her blurb for the book. (Asian Journal’s Prosy de la Cruz also wrote a blurb.)

Charmaine Clamor’s pioneering Filipino jazz music, and her hit take on “My Funny Valentine” with its riff on “my funny brown Pinay,” resonates with me and with the book’s theme.

Speaking of Filipino women, I also feature Maricel Pagulayan and Isabel Sumayao Henderson, both of whom keep a low profile but have held key positions in the male-dominated visual effects and post-production fields in Hollywood.

Remember those scenes of a huge aircraft carrier crashing into the White House, or a gigantic tidal wave washing over the Himalayas in “2012”? John Butiu helped conceptualize those in a crucial process called pre-visualization.

Speaking of the White House, an interview with Cristeta Pasia Comerford, executive chef to several Presidents, including Barack Obama, made it possible for me to step inside the US’ most prestigious home address for the first time when I interviewed her.

From Canada come Mikey Bustos and Luisa Mendez Marshall. Mikey is the man behind the phenomenally popular “Filipino Tutorial” video series that’s gone viral on the Internet. Luisa’s story strikes me on a personal level because she wonderfully converted herself from my former classmate in college to the Tina Turner of Canada and as a host of a TV talk show in Vancouver.

I hope to see you this Tuesday, dear readers, and meet many of you for the first time. The book will be available on www.nationalbookstore.com.ph and at National Book Store branches.

E-mail the columnist at [email protected]. Follow him at http://twitter.com/nepalesruben.