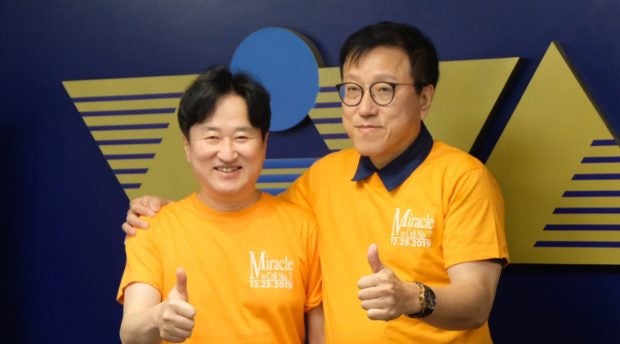 Because their previous big-screen collaboration wasn’t as successful, South Korean producer Kim Min-ki and director Lee Hwan-kyung didn’t have high expectations for their 2013 film, “Miracle in Cell No. 7.” But much to their surprise, it was well-received by the audience. It also won numerous awards, including acting citations for its stars Ryu Seung-ryong and Kal So-won.

“I thought this one would have a similar fate. That’s why we were so shocked that it became so popular,” Kim, speaking through an interpreter, told reporters at a recent press conference for the Filipino adaptation of the said movie, which is an entry in this year’s Metro Manila Film Festival.

The film’s success wasn’t limited to South Korea. Aside from the Philippines, “Miracle” was also remade in Turkey, and is also set to have Indonesian and Vietnamese versions.

What do they think is the reason behind its appeal?

“Its simplicity. Wherever you go, love is a constant … The love between a parent and a child, most especially,” Lee said of the movie, which tells of a mentally handicapped father who gets separated from his daughter after getting wrongfully imprisoned.

Lee and Kim were in the Philippines to attend the premiere of Viva Films’ remake of “Miracle,” which stars Aga Muhlach and Xia Vigor. “We were still moved to tears,” admitted Lee. “Watching it here was interesting. People are more emotional—they laugh more, cry harder.”

Asked about their impression of Aga’s portrayal of the lead character, Lee and Kim both agreed that it was the actor’s generosity toward his costars that stood out the most.

“He’s the main actor, but he doesn’t just thrive on his own. He’s the center of attention, but he doesn’t keep the spotlight to himself,” related Lee, who got his inspiration for the movie from a documentary.

“In Korea, movie stars tend to be the main and only focus; the supporting actors are just on the sides. But Aga can control the emphasis given to him, so others can shine too,” Kim added.

As for the story and style tweaks in the Philippine remake, Lee said he loved what director Nuel Naval did for the ending, which wasn’t in the original. “We were joking that we should remake the remake version,” Lee quipped. INQ

TAGS: Miracle in Cell No. 7