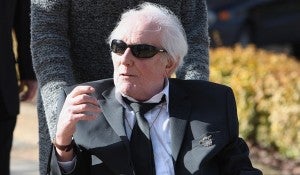 This photo dated March 1, 2010 shows Jim Marshall of Marshall Amplifiers in Milton Keynes, England.Jim Marshall, who helped shape the sound of rock and roll with his groundbreaking amplifier designs, died Thursday April 5, 2012. He was 88. Marshall was known throughout the music world for founding MarshallAmplification, which produced the amplifiers that rocked music halls and arenas after their introduction in 1960. (AP Photo/Chris Radburn/PA Wire) UNITED KINGDOM OUT

LONDON — Jim Marshall, the guitar-amp pioneer nicknamed “the Father of Loud”, has died aged 88, his company’s website announced on Thursday.

Rock icons Jimi Hendrix, Pete Townsend and Kurt Cobain are among those who used the London-born businessman’s amplifiers, eager to exploit the so-called “Marshall sound”.

The online statement said it was with “profound sorrow that we announce the passing of our beloved founder and leader for the past 50 years.

“While mourning the Guv’nor though, we also salute a legendary man who led a full and truly remarkable life,” it added.

“While the entire Marshall Amplification family mourns Jim’s passing and will miss him tremendously, we all feel richer for having known him and are happy in the knowledge that he is now in a much better place which has just got a whole lot louder.”

Marshall worked as an engineer and a drummer and also owned a London music shop before he began to build amplifiers in his garage in the early 1960s, forming the Marshall Amplification company in 1962.

Contemporary guitar-heroes lined up to pay their tributes, including former Guns N’ Roses guitarist Slash, who posted on Twitter: “Rock’n’Roll will never be the same w/out him. But, his amps will live on FOREVER!”

Motley Crue bass player Nikki Sixx added: “RIP Jim, you were responsible for some of the greatest audio moments in music’s history – and 50% responsible of all our hearing loss.”

Such was their standing, Marshall’s amps featured heavily in spoof “rockumentary” Spinal Tap.

In one of the film’s defining scenes, guitarist Nigel Tufnel proudly explains that the volume of his Marshall stack goes up to 11, “one louder” than conventional amps.

Marshall received an OBE in 2003 for his services to music and charity and is survived by two children and two step-children.

Read Next
Houston possibly overdosed, face down in bath—coroner
EDITORS' PICK
Smart brings KCON:TACT especially 4U to subscribers from June 19 to 27
IATF recommends to Duterte face shield use in all enclosed areas
Red, yellow alerts in Luzon grid possible in coming weeks — DOE
Smart celebrates all kinds of ‘#SimplyLove’ for Pride Month
Leo Martinez pleads for senior citizens to be allowed to go out
He called bank: SJ Belangel aimed for backboard on game-winner vs Korea
MOST READ
DepEd chief Briones lying, teachers insist
Pacquiao ‘good choice’ as PDP-Laban standard bearer for 2022 – Koko Pimentel
Lakas-CMD to solidify alliance with Inday Sara’s HNP – Romualdez
Notes for next president: Huge debt, unemployment, hunger
Don't miss out on the latest news and information.