Droid leaks: How C-3PO crossed his legs for ‘Star Wars’ 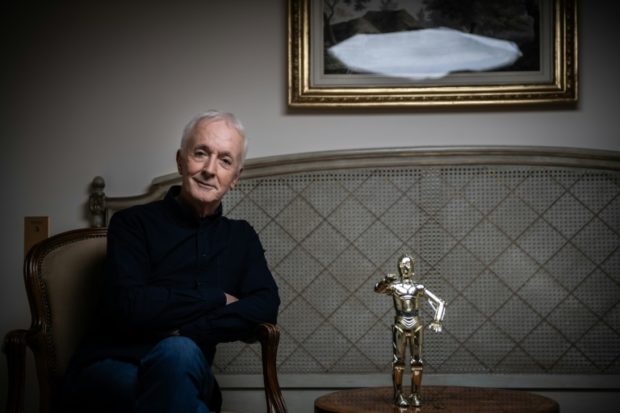 Anthony Daniels has been holding something in for 42 years.

You may know Daniels better as C-3PO in “Star Wars”, the uptight golden robot with the manners of an English butler.

He has been a “Star Wars” constant since the opening scene of the original movie, or what is now called “Star Wars Episode IV: A New Hope” in the ever-expanding galaxy of sequels, prequels and spin-offs.

And for all that time the English actor has been suffering for his art.

Fans may have wondered why C-3PO walked so awkwardly.

Now we know. The robot costume was painful to wear and took so long to put on that Daniels wasn’t allowed to go to the toilet all day.

“The first day it was horrible,” he told Agence France-Presse in Paris in the build-up to the release of what looks like his final bow in “The Rise of Skywalker” on Wednesday.

“No lunch, no bathroom, nothing,” said the actor, who used to take two hours to get into his gilded cage.

Over the years, however, things have got better, Daniel conceded. “It is still heavy but I don’t have to wear it all day anymore.”

And he can put it on in six minutes now.

“There are still issues, however,” he admitted. “It’s like a suit of armor. I’m sure at Agincourt (the medieval battle at which the English massacred thousands of French knights) the soldiers were going, ‘Oh, this armor hurts.'”

“But they have done their best,” he said.

Daniels, now 73, is not one to slavishly toe the studio line, complaining last month that he felt his character had been reduced to a “table decoration” in some of the new films.

And back in 1975 when he was first cast as the panicky polymath droid, he was ready to turn his nose up at the part, having come from serious theatre.

“I think I was rather pretentious,” Daniels told AFP. “I thought acting on stage or on television in proper clothes was what I was for.

“When my agent told me about George Lucas, this American science fiction man, I was not interested. But she made me go,” laughed the actor, who has just published his autobiography, “I Am C-3PO: The Inside Story”.

Luckily, Lucas won him over. “George was a very attractive personality, very quiet, very timid and intelligent. First thing I liked him, then I liked painting the character, then I liked the script,” said Daniels, who has since been immortalized in millions of plastic figurines.

The film went on to change cinema history and Daniels’s life.

“I was more surprised than anyone on the planet” at the first film’s success, he said, thinking that it would be a one-off “curious experience.”

“The big surprise was that it was a big success,” he said.

But the glory was bittersweet.

It has to end

“The unfortunate surprise for me was that nobody mentioned I was in the film,” even though he was on screen almost exactly as long as Han Solo, played by Harrison Ford.

“I had the biggest part (after Luke Skywalker and Solo) and yet nobody ever interviewed me, to say ‘Well done!’ or whatever. So that was uncomfortable. But the fact that everybody in the world enjoyed what everyone had done was good,” he added.

Daniels long ago became resigned to playing the character that everybody knows — yet comparatively few people know who he is.

“At the beginning it was difficult. Now a lot of people do know me. But they know me in a very gentle way,” he said, sparing him the worst of the curse of celebrity. “When they meet me, they talk about their childhood and when they saw ‘Star Wars’, which is sweet.”

Even for him, the sheer scale of the franchise is mind-boggling. “It’s just so enormous and so worldwide that my brain cannot contemplate it really. It would be like looking at a room full of ball bearings and wanting to count them.

“I know I’ve done it, but I don’t think about it every day. It’s other people that are possibly more excited than I am,” he added.

Daniels said he thinks this will be his last “Star Wars” film.

“Because the story could go on forever. But here we go ‘Stop!'” he said, clicking his fingers. “There are other stories to tell, other films to make. But C-3PO probably will not appear in a big movie again. And I think he’s ok with that. And I’m ok with that.”

That said, “I was a little sad on the last day, because it had been such a good experience. And it came at the end of experiences that have not always been as good. We end on a very high note here. So I feel good about that.” CL/JB