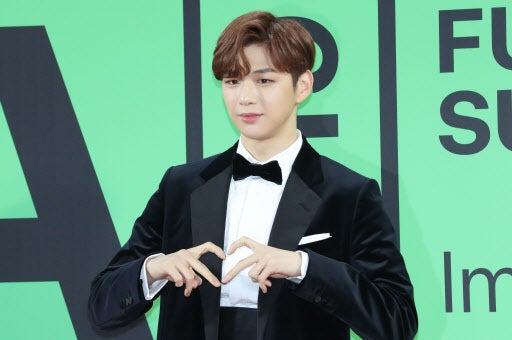 Kang Daniel poses at the MMA 2019 Imagine by Kia on Nov. 30. Yonhap via The Korea Herald/Asia News Network

Kang has canceled recordings for TV programs, including “Show! Champion,” an MBC music program that was scheduled for Wednesday.

“Securing enough rest for the artist’s condition is the first priority,” management agency Konnect Entertainment said in a statement, adding that Kang’s depression has worsened recently.

The announcement came just as Kang was about to start promoting his new song, “TOUCHIN’.”

Kang debuted in 2017 with 11-member boy band “Wanna One,” which was formed through the second season of the “Produce 101” K-pop competition series. Kang proved to be the front-runner throughout the season.

Earlier this year, Kang became embroiled in a legal dispute with his former agency, LM Entertainment, as he debuted as a solo artist. Although the case ended with the court ruling in Kang’s favor on the exclusive contract dispute, Kang was reported to have been under great stress during the period.

His first solo album, “Color on me,” released amid the legal wrangling, was not actively promoted.

Kang posted several messages on his official website this week, including one reading, “Ever since I was part of a group, I have endured unjust situations and all kinds of rumors … but I am really just so tired.”

“The photos of myself kneeling at the end of ‘Wanna One’ concert and all my emotions have become an object of ridicule … the fact that I am me is just too difficult,” another message reads.

Meanwhile, the high-profile K-pop TV competition has been dealt a huge blow in a recent vote-rigging scandal. Eight people were indicted Tuesday in connection with manipulating voting results for the “Produce 101” series in favor of certain contenders on the show.

Over the past two months, three young artists in the Korea entertainment industry have been found dead, raising awareness of an unsavory side of the industry. Sulli and Goo Hara, both K-pop singers and actresses, were found dead at their homes in October and November, respectively, after becoming the center of malicious gossip on social media. On Tuesday, Cha In-ha, a 27-year-old actor, was also found dead at home.