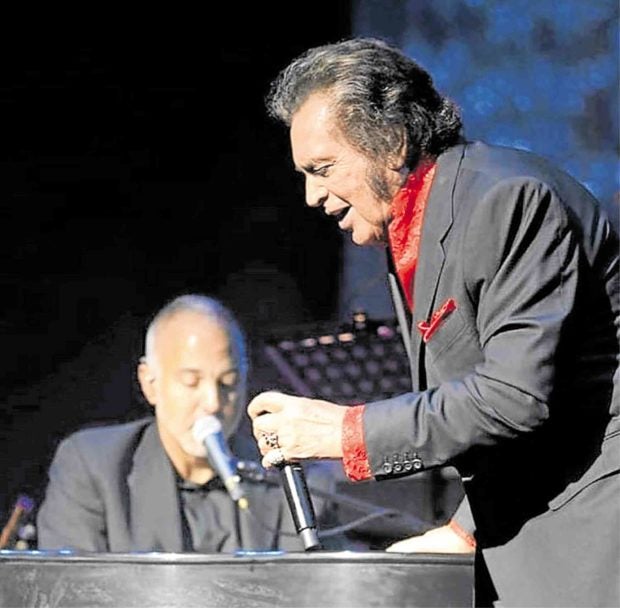 Engelbert Humperdinck, the iconic pop singer known for his enduring easy listening ballads like “The Last Waltz” and “Release Me,” is set to return to Manila anew—this time for his ongoing world tour, “The Angel On My Shoulder.”

Mounted by Mr. P Entertainment’s Joed Serrano, with the Inquirer as media partner, the one-night show tomorrow at the New Frontier Theater—will have the British crooner performing his well-loved hits, which likewise include “After the Lovin’” and “This Moment in Time” (call 8911-5555).

While he has already performed in the Philippines a couple of times in the past, it seems like Humperdinck, whose real name is Arnold George Dorsey, doesn’t seem to get tired of visiting the country.

“I look forward going there because I always have a good time. People are fun and warm,” the veteran music artist told the Inquirer in a previous phone interview, adding that traveling around is one of his passions. “No matter the language people speak, the music speaks louder. It’s all about being able to entertain them.”

Dubbed “The King of Romance” during his heyday, Humperdinck amassed a considerable following with his smooth singing and flamboyant fashion style. Humperdinck is a four-time Grammy nominee, has released dozens of studio albums and sold more than 150 million records.

At the age of 83, Humperdinck is still very much active, even devoting time to social media to connect with fans while on tour. “I didn’t think I would be spending my life in the industry this long. But through hard work and the help of good people, I’m still here, doing what I love most,” he said. —ALLAN POLICARPIO