With 2 more Big Bang members discharged from, military, what now? 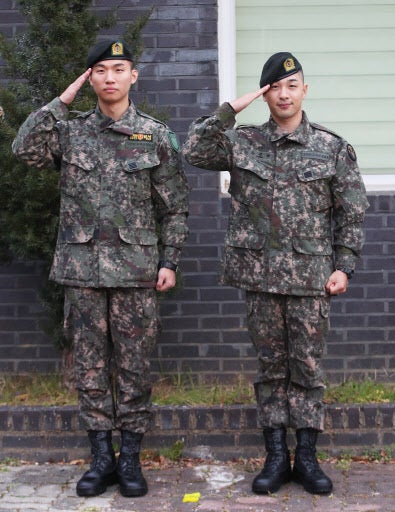 The two vocalists — who enlisted in March last year — greeted hundreds of fans who gathered to congratulate them on their discharge early Sunday morning at Ground Operation Command in Yongin, Gyeonggi province.

“I have spent meaningful time and would like to express my appreciation to my fellow comrades and supervisors who led me over the past 20 months in the military base,” Taeyang told the crowd, according to Yonhap News Agency.

“I have felt many things there, and I learned how to better understand others,” Daesung also said.

Taeyang and Daesung served in Cheorwon and Hwacheon in Gangwon province, respectively. The Defense Ministry changed the site of their discharge as the two military bases are located in areas still considered exposed to African swine fever and a huge crowd of fans was anticipated at their discharge.

With two other members — leader G-Dragon and rapper T.O.P — also having completed military service, all the members can now can resume entertainment activities as a group.

But some say the band’s future will not be easy, as the legal troubles of T.O.P and former member Seungri have hurt the image of what was once South Korea’s biggest boy band.

Seungri left the entertainment industry in March after being involved in the Burning Sun scandal in which he was accused of providing prostitutes to foreign investors, among other allegations. Yang Hyun-suk, former CEO of YG Entertainment, also stepped down from his position in June.

T.O.P, who was discharged in July, had to serve as a public service worker at Yongsan Ward Office after he was dishonorably discharged from the police due to charges of smoking marijuana in 2016 after he began military service as a conscripted policeman in February 2017.

“We need a lot of wisdom and discussion among members,” said Taeyang on being asked about their plans as a group.

G-Dragon is scheduled to appear at a fashion event this month as his first official engagement since his discharge on Oct. 26.

All able-bodied South Korean men are required to complete military service for about two years in South Korea.