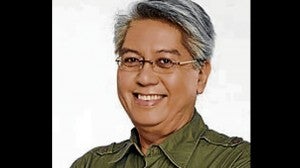 CAYABYAB. It took him three years to compose the music of “Magnificat.”

After its triumphant repeat performance in Pola, Mindoro last April, composer Ryan Cayabyab and writer-director Nestor Torre’s well-loved sung-through religious musical, “Magnificat”—about the life of Jesus Christ as seen through the eyes of his mother, the Blessed Virgin Mary—returns to Metro Manila on June 27, with a special show at 8 p.m. at the Plaza Cristo Rey, P. Burgos cor. Rivera sts., Poblacion, Makati City.

The popular musical has been performed more than 160 times since it “premiered” in 1996 in the living room of Pinky Marquez, who portrays Jesus’ self-effacing mother in the production. Wait—in a sala? That’s right.

In an effort to reach out to as many people as possible, aside from performing in major venues like Araneta Coliseum, Meralco Theater, Cuneta Astrodome, as well as churches, gymnasiums, school auditoriums, and hospitals, “Magni”—as its cast lovingly calls the acclaimed religious musical—has also been staged in unconventional places—like gardens, unfinished churches, in the midst of squatters’ “homes along da riles,” on the mezzanine and winding staircase of the Inquirer office, and even inside the Maximum Security compound of the National Bilibid Prisons in Muntinlupa!

Cayabyab and Torre’s Little Religious Musical That Could doesn’t have spectacular sets—just a flowing white curtain—as its actors  play multiple roles to breathe life into the Greatest Story Ever Told. “Magnificat’s” potent combination of glorious songs, edifying spiritual insights and powerfully moving performances is the key to its lasting appeal.

For our part, it’s easy to understand why “Magni” holds a special place in our heart as a performer: We’ve been part of the production since Day One, and has missed only two performances since it began its historic run—and, once, only because we couldn’t get through the formidable El Shaddai crowd the show was going to perform for!

Because of its popularity, the production eventually came up with a Cebuano version—and we, along with Andy Bais and Tex Ordoñez de Leon, who with Pinky Marquez, Dulce, Jingle Sayson and Shiela Asuncion, has also played Mary, were flown to Davao to join the initial run of “Magnificat” in Cebuano. (Note that Tex doesn’t speak Cebuano, so she had to learn her lines phonetically!)

With its moving and evocative depiction of a mother’s struggle to accept the pre-destined sacrifice of her beloved son, “Magnificat’s” ability to unite people (even those from different faiths) continues to amaze us. In its various incarnations, its cast has included born-again Christians and even Muslims, who embraced the musical’s unifying and all-encompassing message of love for mankind.

For Ryan Cayabyab, who’s also busy preparing for his “Ryan Cayabyab and Friends” concert at Resorts World Manila on June 28, writing the music of “Magnificat” was no walk in the park.

In fact, Ryan found the task so “daunting and formidable” that after finishing Act One, he told NUT to ask somebody else to finish the rest. He shares, “It’s probably the most difficult musical I’ve ever done. But, somebody must have prayed a novena for it, because I eventually finished it before Christmas in 1995—three years after I began writing it!”

Is he a Marian devotee? Ryan enthuses, albeit cautiously, “Yes, but I don’t usually talk about it, because I don’t want to impose my spirituality on other people. I had a very Catholic upbringing. However, it’s hard to get into arguments about these issues, because that’s where people’s convictions and personal biases come in.”

What does he do to convey the emotional tone or energy of a scene or character? Mr. C explains, “I was moved the first time I read the script of ‘Magnificat.’ The lyrics or dialogue in a script instantly carry a certain meter, rhythm and musical inflection. As I go from one scene to another, it tells me how the music progresses. Sometimes, I ask actors to read lines from the libretto, kasi iba ang naririnig sa nababasa.

“This isn’t true for everybody, but for me, music shouldn’t draw viewers’ attention away from what a play is about—it merely acts as a conduit to relay a message. I use music to enhance a story, move it forward and organically bring out the characters’ denouements. I love observing people, so I hear music as they go about their daily chores—for me, they translate into music!”

Bringing “Magnificat’s” message vividly to life is similarly daunting for its cast. For the current run, the group rehearsed for more than six months to memorably and movingly vivify Mary’s life as seen within the context of Jesus’ mission of salvation.

The production’s June 27 performance is part of the Poblacion Makati Barangay Council’s festivities, spearheaded by Barangay Capt. Benhur Cruz, to celebrate the city’s 341st founding anniversary, as well as the feasts of their patrons, Sts. Peter and Paul and the Nuestra Señora dela Rosa (call Dwayne Samarista at 897-4822). The cast of “Magnificat” is happy to sing about Jesus and Mary for them!