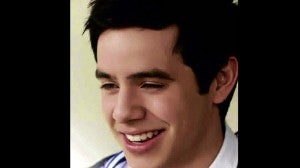 DAVID Archuleta’s “Forevermore” album is a must-own recording rarity, and a unique opportunity to present the beauty of Filipino pop ballads to the world—because it isn’t every day that a singing star of Archuleta’s caliber and hit-making cachet waxes an album made up entirely of OPM. And, we’re pleased to note that his “fling” with Pinoy music more than makes up for his underwhelming foray into the local telenovela scene on TV5.

No, it isn’t David’s intention to out-sing the repertoire’s original interpreters—after all, the vocal pipes of Regine Velasquez, Gary Valenciano, Martin Nievera and company are nothing to scoff at.

Take “You Are My Song.” The he-sang-she-sang versions of Nievera and Velasquez are similarly outstanding—so, the 21-year-old singer smartly veers away from bravura singing and treats it with less drama.

In a recent interview, he explained, “I wouldn’t say that I sound better than they do, because Filipino singers are amazing. But, through this album, I hope to pay tribute to them”—and that’s exactly what he does!

After David reimagines Side A’s “Forevermore” and makes its romantic tale his own, you’ll marvel at his sleek and smooth revivals of Neocolours’ “Maybe” and Nexxus’ “I’ll Never Go.” There are no false, awkward notes anywhere, even when he launches his exhilarating, but judiciously-rendered trills in complicated codas (“Hold On,” “Maybe”).

But, while it’s true that Archuleta’s reverential style makes his revivals seamless, it’s also responsible for the album’s only drawback: In some stanzas of Joey Albert’s “Tell Me,” for instance, his consistently structured phrasing and technical precision diminish the tune’s dramatic bite and evoke emotional detachment, instead.

Of course it’s excusable to find this problem in a Tagalog track—as in the case of the otherwise earnestly-sung bonus track, “Nandito Ako,” because the language barrier just makes it impossible for listeners to see the tune beyond its hum-worthy melody and the novel concept of having David sing an enduring local ballad.

The baby-faced “American Idol” heartthrob does better with South Border’s dreamy love songs, “Rainbow” and “Wherever You Are,” because of their freewheeling melodic structure and R&B mold—a style that suits his malleable but sinewy voice to a T.

Archuleta finds the perfect album-closer in Gary V’s classic ’80s ballad, “Reaching Out,” which he sings with unbridled passion as he hems and haws about unrequited love!