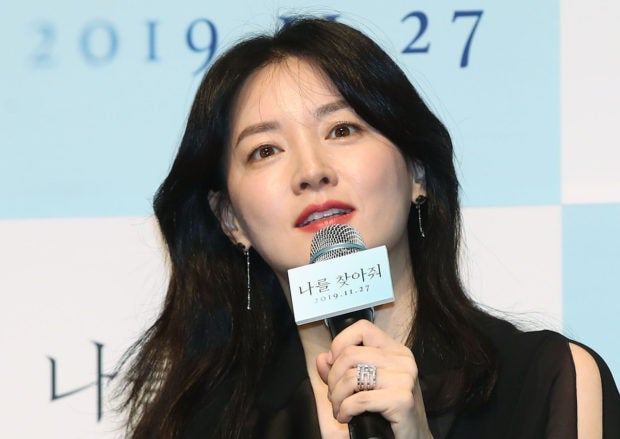 Lee Young-ae speaks at the press conference for “Bring Me Home,” in Seoul on Monday. (Yonhap) via The Korea Herald

SEOUL — Lee Young-ae is not the most prolific of actresses, but she has left lasting impressions with memorable characters in her few works, such as “Sympathy for Lady Vengeance” (2005), “One Fine Spring Day” (2001) and “Joint Security Area” (2000).

“I expect and want this (film) to be a turning point (in my career) as much as ‘Sympathy for Lady Vengeance’ had been,” Lee said at a press conference for upcoming mystery thriller “Bring Me Home.” The film marks Lee’s presence on the silver screen for the first time in 14 years.

The first feature-length film of director Kim Seung-woo follows dedicated mother Jeong-yeon (Lee), who is tipped off that her son — who had been missing for six years — has been spotted. This leads her to a fishing village where corrupt police officers might have the answers to her mystery.

“While Jeong-yeon’s role is of course important, all the characters in the village are crucial (to the plot),” she said of the film. “Although this is a thriller, it is a heartwarming story. … There are all kinds of people in the film, not just kindhearted people, but that’s the reality. It leaves a lingering feeling that I can look back on, which is why I chose this film.”

In that she is a mother whose child has been taken away from her, the character of Jeong-yeon has drawn comparison to Lee Geum-ja, the most iconic and well-known among characters the actress played. “The difference is that (my new character) is a real mom, which allowed me to sympathize (with the character) in various ways,” she said.

Her character in the new film differs greatly from the somewhat-twisted and depraved role of “Sympathy for Lady Vengeance,” she added.

“‘Bring Me Home’ is a story of a mom that one may find in reality, which is very different from that movie. … I’m personally curious about how the emotions I have — which I accumulated over eight years of being a mom — can be reflected in the character,” said Lee, who gave birth to twins eight years ago. She added that being a mom had affected her in terms of choosing a script, saying she wanted the film to “have positive effects for the future.”

Yoo Jae-myung, who plays a police officer, said his character is one that has a “certain authority and rule” in his life, which is ruptured by someone else entering the picture.

Director Kim said the film focuses on how a woman sets out on a quest to find a child in an environment where everyone attempts to hide the truth. “It’s about a value that we should never forget,” he said.

“It’s a story that I thought of 12 years ago. There was a banner for a missing child, which made me think about the parents (of the child) and whoever was involved. This made me write (the story),” Kim said.

He added that every moment with Lee had left lasting impressions, saying that the actress’ presence could “change the air” every time she was on screen.” “I’m sure the audience will feel it when they see it on the big screen as well,” she said.

The film opens in local theaters on Nov. 27.