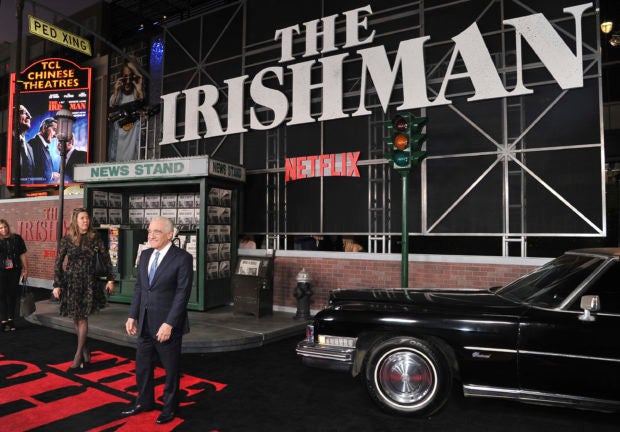 Director Martin Scorsese arrives at the Los Angeles premiere of “The Irishman” on Thursday, Oct. 24, 2019, at the TCL Chinese Theatre. Image: AP/Invision/Richard Shotwell

NEW YORK — Martin Scorsese’s crime epic “The Irishman” landed in theaters Friday, but not nearly enough of them for theater owners.

John Fithian, president and chief executive of the National Association of Theater Owners on Friday lamented Netflix’s rollout of one of the year’s most acclaimed films, from one of cinema’s top filmmakers.

Netflix was unable to come to terms with the largest movie theater chains on “The Irishman”. The traditional theatrical window is 90 days, something Netflix has declined to follow.

That has left Netflix films essentially boycotted by the majority of multiplexes. Netflix has instead carved out a roughly three-week exclusive run in independent theaters.

“The point of an exclusive theatrical window is for movies to reach their full commercial potential. Netflix chose to artificially limit ‘The Irishman’s’ theatrical release,” Fithian said. “That sends a message to filmmakers who are not Martin Scorsese. If you want a full theatrical release, take your film to their competitors.”

Scorsese has praised Netflix for its willingness to bankroll the $159 million film — the only company willing to do so, he said.

“We decided to make it with the understanding that it’ll maybe never be shown in theaters. They said, ‘You would have a time in theaters’ — a few weeks or whatever. I said fine. The idea was to make the movie, you see,” he told The Associated Press in June.

Netflix and theater chains, including AMC and Cineplex, negotiated extensively earlier this year on a compromise but ultimately failed to reach an agreement.

Netflix declined to comment Friday evening. A company executive who spoke to The New York Times about its “Irishman” strategy said the company cares about box office, but also wants viewers to watch films the way they want.

“The Irishman” is opening this weekend on eight screens in New York and Los Angeles, including Broadway’s Belasco Theatre. It begins streaming on Nov. 27. IB/JB