He talks about the action icons who inspired his Rev-9 characterization
By: Rito P. Asilo - Entertainment Editor
Philippine Daily Inquirer / 12:02 AM November 04, 2019 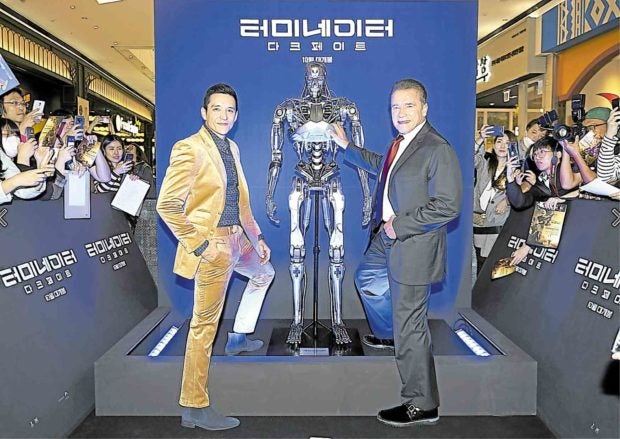 SEOUL—It’s always fascinating to see how a cast of actors reacts to fans and journalists during press junkets.

On our recent trip to South Korea to interview the kickass cast of “Terminator: Dark Fate,” which included Linda Hamilton, Arnold Schwarzenegger, Mackenzie Davis, Natalia Reyes and Gabriel Luna, it was easily the latter who was the most charming.

That isn’t saying that the others weren’t “friendly,” but the 32-year-old Gabriel (“Agents of S.H.I.E.L.D.,” “Wicked City,” “Rosewood,” “True Detective”) was clearly a cut above the rest.

The new hunk on the block certainly scored more “pogi” points for his endearing accessibility.

At one point during the roundtable interviews with the Asian press, when he noticed how the journalists were just waiting for the right time to have their pictures taken with them, Gabriel reached out from the other side of the table, picked up a writer’s cell phone and took a quick selfie with the grateful bunch. 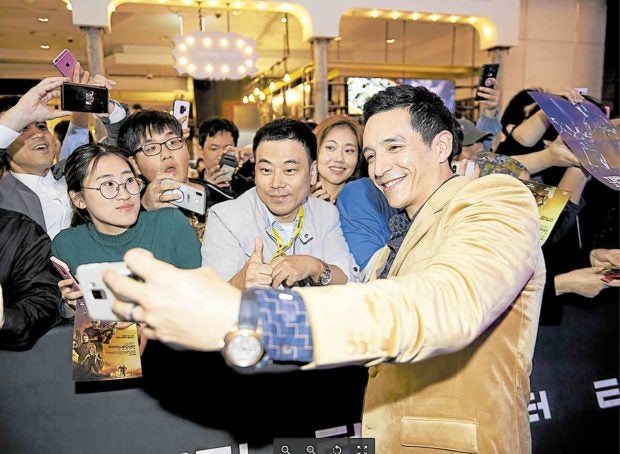 The charming actor takes a selfie with fans.

Gabriel plays the invincible Rev-9 Terminator in “Dark Fate,” comfortably filling the enhanced killing machine’s shoes with as much ease and grace as believability.

After playing the Ghost Rider aka Robbie Reyes in “Agents of S.H.I.E.L.D.,” what was the shift like from superhero to villain for Gabriel?

“Fortunately, there’s a lot of the same skillset required for both characters,” he said. “I was able to do a lot of motion-capture, facial and wire work, as well as combat training before this.
“So, when they asked me if I could do those for ‘Dark Fate,’ I said, ‘Yeah, no problem.’

“But then, I didn’t realize I had to do it ‘exponentially’—you know, because of the bigger environment and [larger scale]. So, I was thankful to have that early experience, because it definitely came in handy.”

Robert Patrick famously said that he channeled an insect for his T-1000 robot. For his part, Gabriel said he thought of channeling something feline, then turned to action icons for more inspiration.

“I saw Rev-9 like a big cat,” he said. “Also, I took a lot of inspiration from Bruce Lee. He wasn’t just a martial artist, he was also an action hero. His whole philosophy was ‘efficiency in combat’—which can be applied to any machine that’s built to fight and kill.

Luna as the Rev-0 Terminator in “Dark Fate”

“So, there’s no false or wasted movement. Then, of course, there’s Arnold and Robert, and everything they did for their respective Terminator characters. I just took what was great about all of that, then just added more layers to it.”