Arnold Schwarzenegger, Linda Hamilton on the evolution of ‘Terminator’ 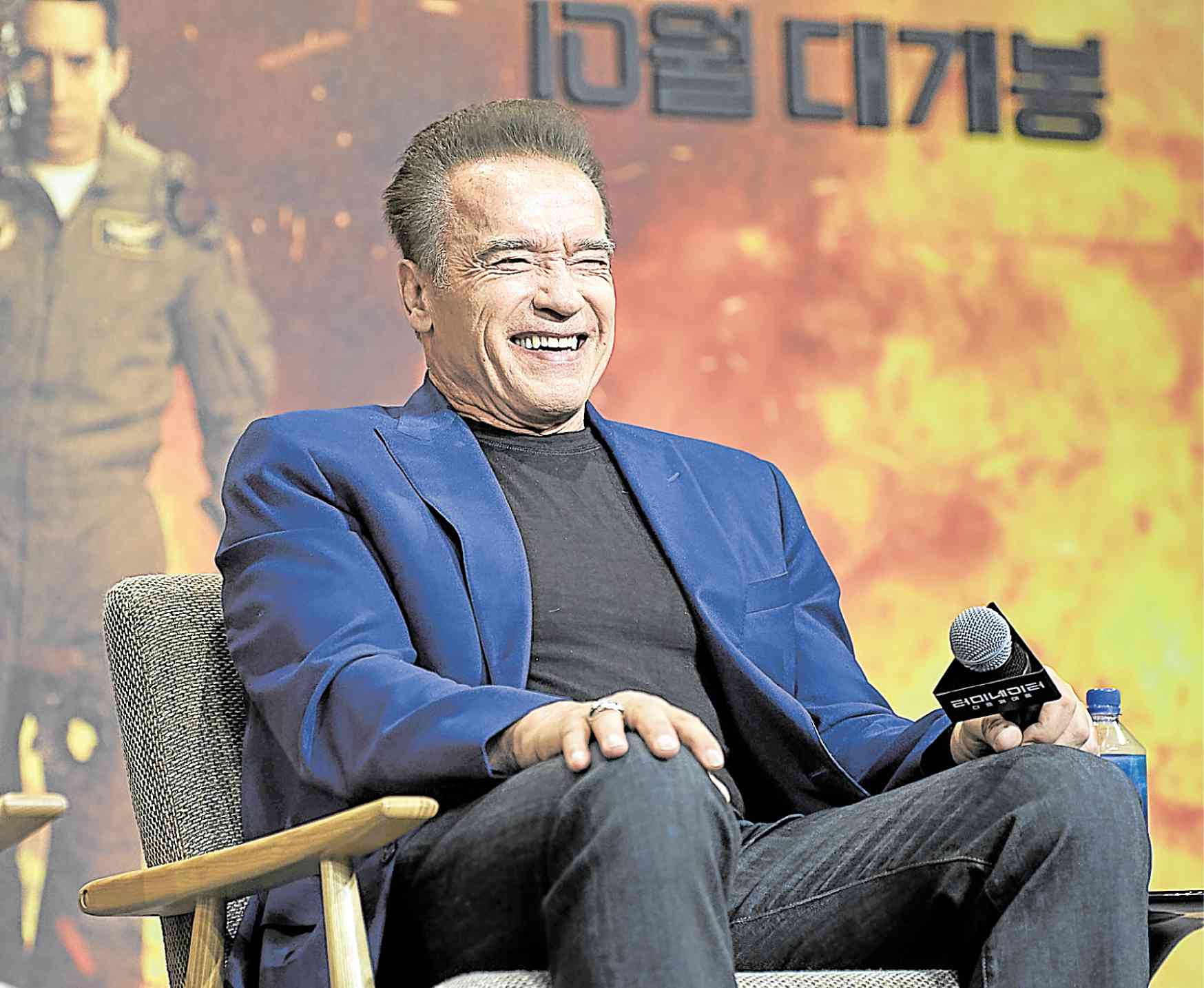 SEOUL—Arnold Schwarzenegger seemed like he was still in character for “Terminator: Dark Fate” when we met him and his costar Linda Hamilton early this week, along with five other journalists from all over Asia.

“That is such a lame question,” he quipped as soon as he heard the first question of a writer who was as quick on the draw as Carl, Arnold’s T-800 android character in the sci-fi flick. It was a question that was meant for Linda: What made you decide to return to the “Terminator” series after 28 years?

But don’t panic. The 72-year-old actor’s intention wasn’t to “terminate” or “exterminate” overeager writers, really—it was, as he later explained with a disarming grin, Arnold’s way of breaking the ice and keeping the after-lunch roundtable chat eventful and easygoing. “Just to keep everybody in the room awake,” he added.

But it was hard for everybody’s mind to wander, given Arnold’s larger-than-life presence and Linda’s straightforward answers.

“I felt it was interesting to come back after all these years,” Linda said. “As an actress, I could fill in the 28-year void with my own story. While it isn’t necessarily seen onscreen, it’s told by the work that I do, and by [the] very wrinkles on my face. I wanted to do something new for my character, Sarah Connor, and being Sarah at my age (63), that’s new.” 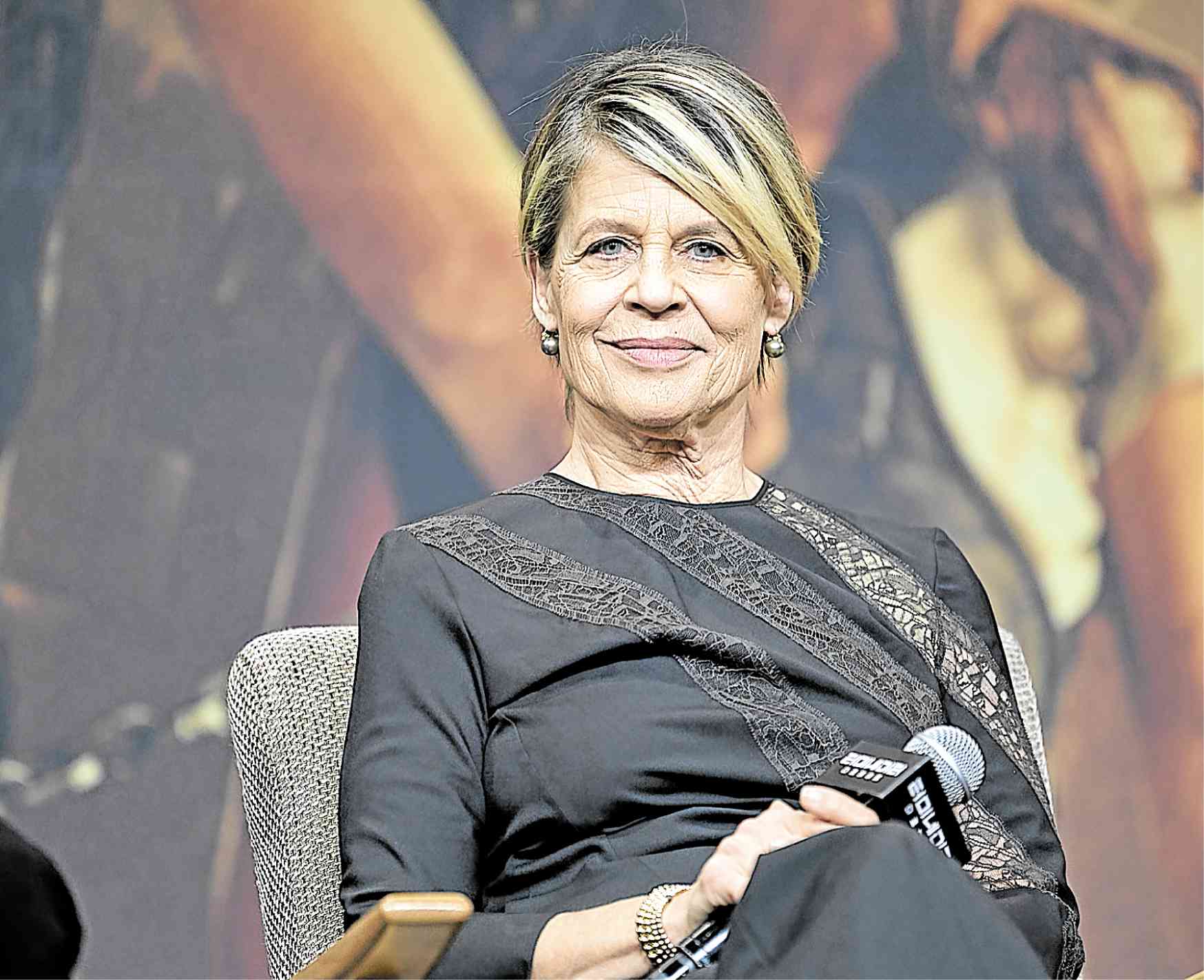 The veteran actors were in Seoul to promote “Terminator: Dark Fate,” the sixth installment in the lucrative sci-fi series. The film, described by Rotten Tomatoes as a “significant upgrade over its immediate predecessors,” will begin its theatrical run in the Philippines on Wednesday next week.

Keeping Arnold and Linda company were costars Mackenzie Davis (who plays the cyborg Grace), Natalia Reyes (as the new Terminator’s target, Dani) and Gabriel Luna (Rev-9, an advanced Terminator prototype sent back in time to get rid of Dani) and director Tim Miller (of “Deadpool” fame).

“The last time I was here, I said I’d be back—so, I’m back,” Arnold said during a press conference held the day before our interview with Miller and the cast. “It’s so much fun promoting a very good film like ‘Dark Fate’ than a so-so movie.” 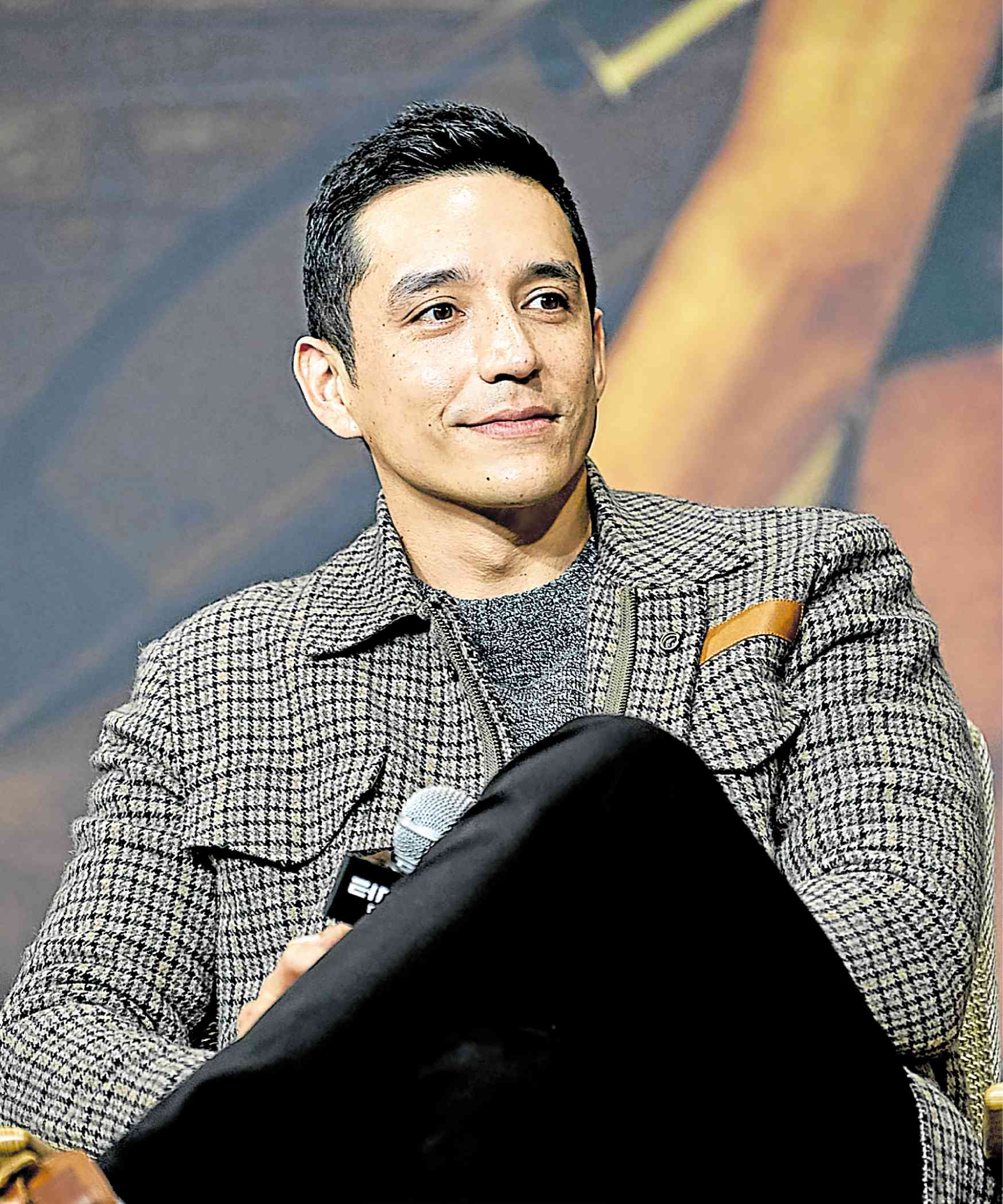 The feel-good blast of nostalgia can’t be helped. “It’s been 35 years since the original movie, and I’ve been part of all films, except ‘Salvation,’” Arnold noted. “It is very old, but it’s still useful. I’m very glad Jim Cameron asked me to do ‘The Terminator’ because it really boosted my career.

“My success in it led to other successful films, like ‘Predator’ and ‘Commando.’ So, I was very happy to be back again for ‘Dark Fate,’ this time with Linda. Tim truly understands action and visual effects—they make a great combination here.

“When it comes to my age, I don’t feel it, maybe because I train all the time. I work out every day, so I’m always ready for a movie like this.

“As for Linda, she raised the bar so high in ‘T2.’ There’s no woman as badass as Linda. All the things that she did in that movie—the chin-ups, pull-ups, push-ups, the running, jumping, fighting and shooting—everything was so believable because of how hard she trained and worked on her body. 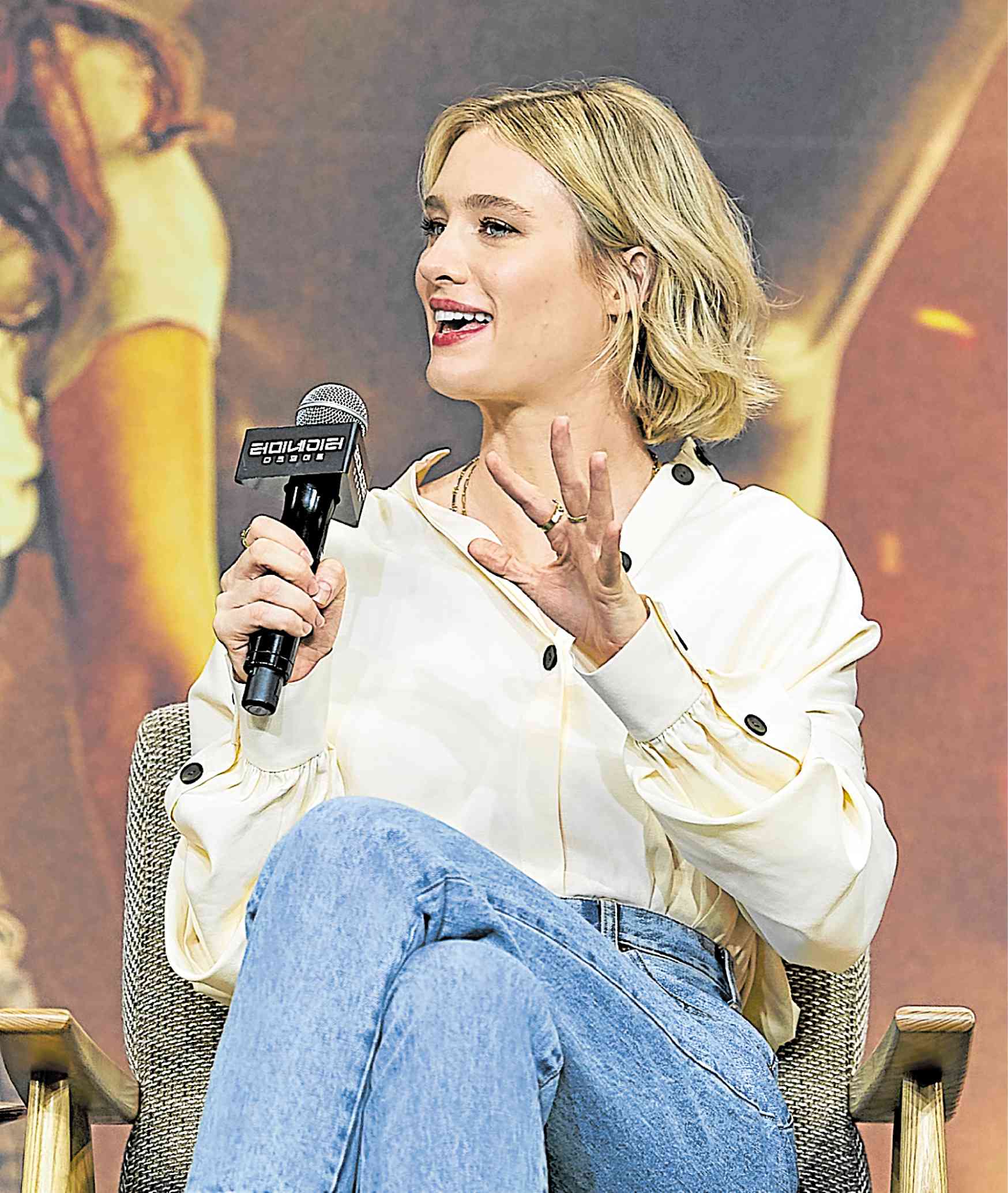 “After 28 years, you’d think there’d be a lot of pressure to measure up to that. But she trained just as hard the moment [producer] James Cameron told her about ‘Dark Fate.’ For a woman to do that at the age of 60 is a whole different ball game.

“I was on the set on her first day to watch her action scenes, and I saw the way she moved, the way she held the gun. She set a standard for women, as well as for women 60 years and older. It was spectacular to see her pull it off!
“I was so happy when Linda and James came back to the series. It felt like the old team was complete again, like putting ‘The Terminator’ and ‘T2’ into a blender and brrrrr.”

The reunion was just as special for Linda, who says that seeing Arnold again was emotional for her.

“It was a fantastic moment. We may not have spoken in many years, but we forged a great friendship since our heyday as Sarah and the T-800,” she said. “We lost touch when he became the governor of California. So, when we met again on set and wearing our costumes, we just fell right back into it.

“I worked out and trained for a year, but it isn’t like you can just step on a stage and you’re Sarah Connor again.
“So, when I finally saw Arnold, I was very ready for the role. I’ve never been happier to see him again.” 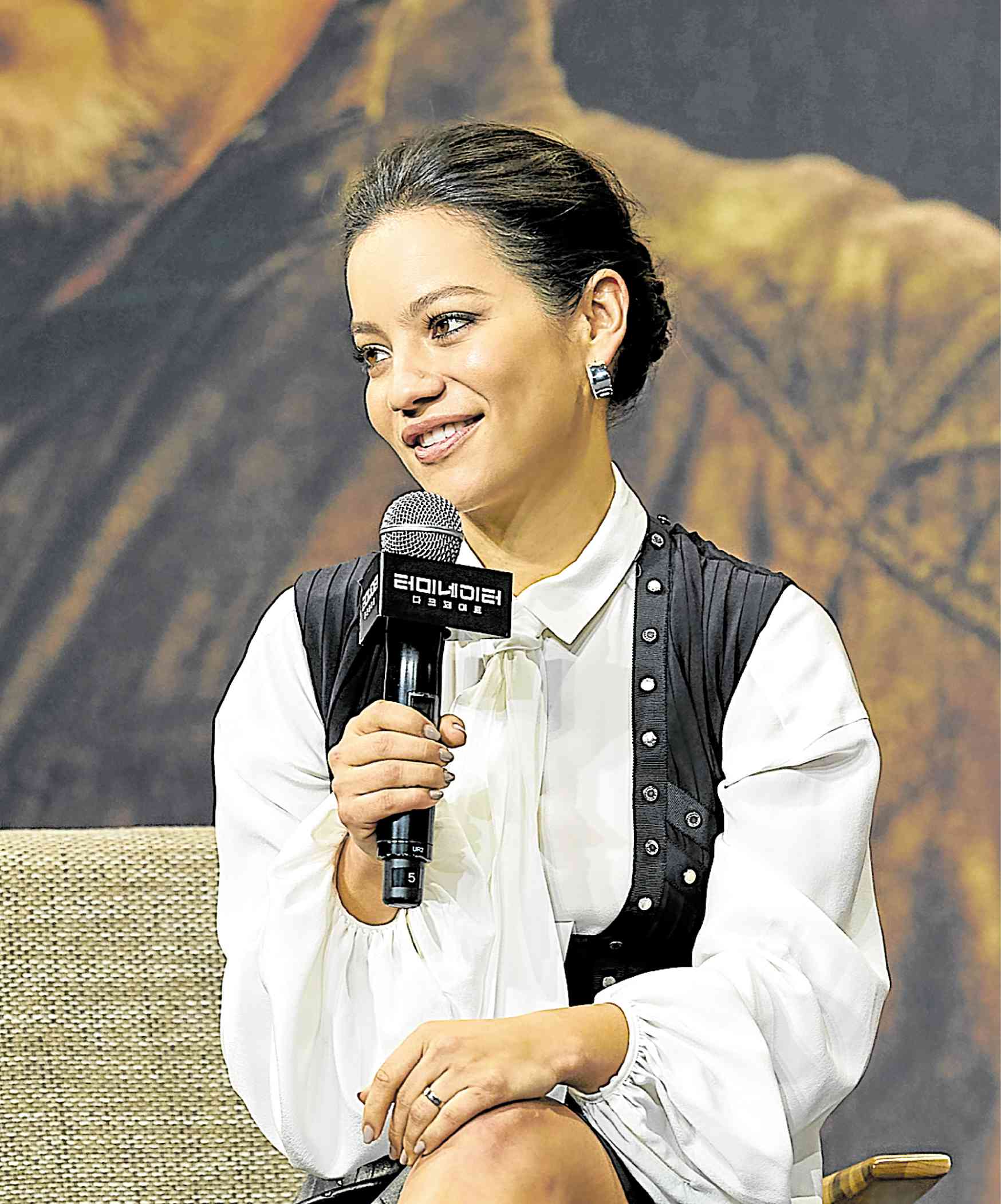 Excerpts from the Q&A with Linda and Arnold:

What has changed in the industry and the franchise since 1984?
Arnold (A): To be honest with you, as far as we are concerned, nothing much. One thing stays the same: Whether it’s those silent movies since a hundred years ago or the most sophisticated action films these days, you have to have a great story that plays well in any continent in the world.

If you want to create a movie intended only for America, that’s perfectly fine. But if you make a $400-M film, you have to have a story that you can screen in South Africa, the Middle East, Asia and Australia, Europe and Russia.

Would “Dark Fate” have been as good if it were made in 1984?
Linda (L): If they made this in 1984, it would have looked bad—I can pretty much guarantee that. Technology has come so far. I don’t know if anybody would have dared to do something as auspicious back then, because how do you show a plane falling from the sky with zero gravity while your actors are fighting weightless in the air, with some big machines floating around them? Yes, they might have attempted it, but it would’ve been crap.

In “The Terminator,” Sarah Connor was a hapless girl thrown into a helpless situation. In “Judgment Day,” she was willing to do anything under the sun to save her son, John. How do you see her evolution over the years?

L: That’s what intrigues me about the characters I play. I want to see them take a journey. If I just came back like the last Sarah [in “T2”] trying to protect her son, I don’t think ‘Dark Fate’ would have the same impact.

This time, Sarah has changed—and not for the better! She’s no longer on a mission, so she’s lost and broken.
I thought it was a great way to start the film … for her to have very little humanity.
When we start the movie, I can say that she’s quite less of a human being than the T-800. 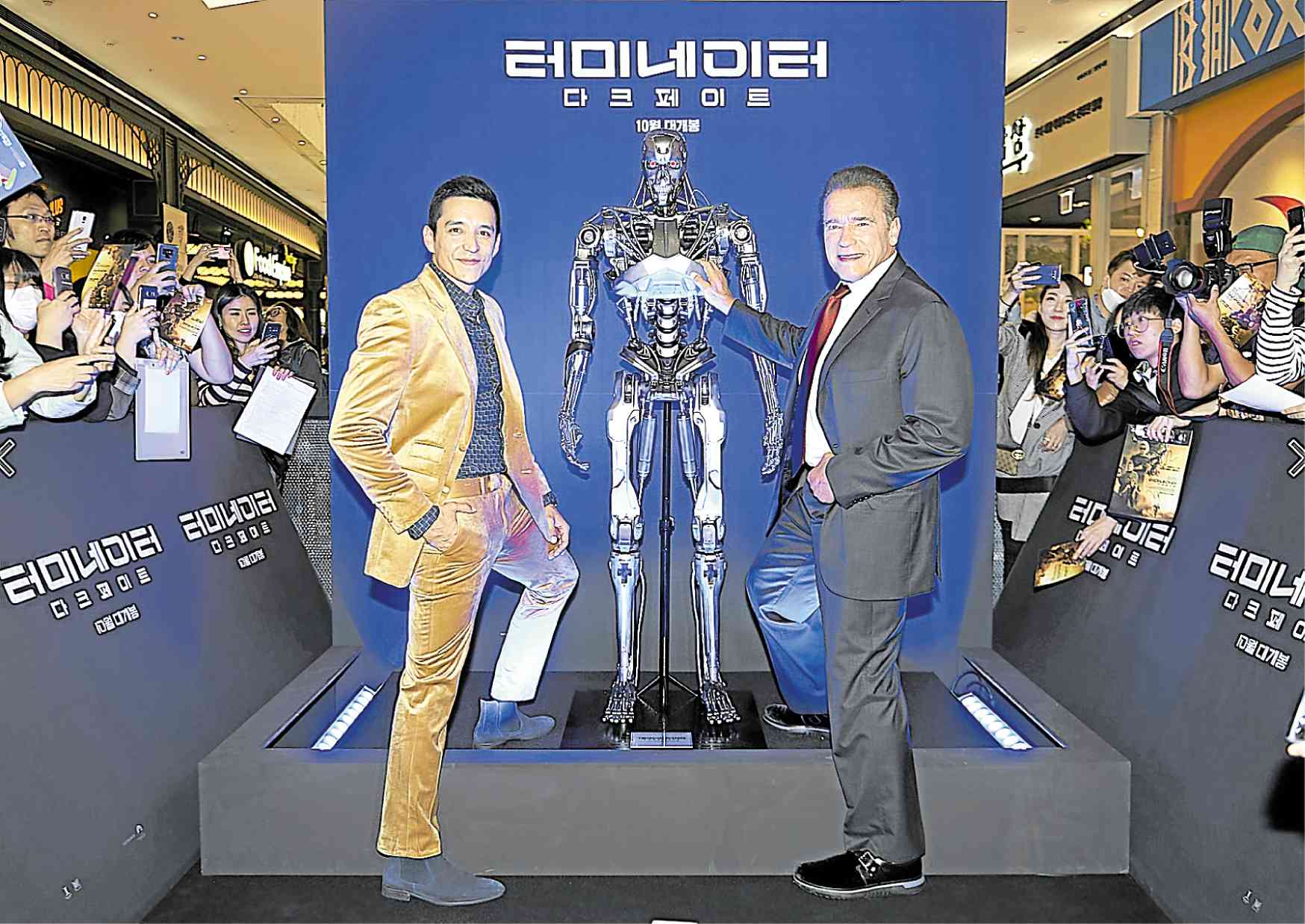 What did she think of the strong female character she’s playing?

L: Strong female characters have always been present in Hollywood. They’ve been onscreen since the ‘40s and ‘50s; it’s just that they weren’t necessarily action stars or the characters leading the action, like fierce warriors and fighters.

Things tend to go in waves, and people are quick to turn something like this into a sound bite, like women empowerment.
Women have always been strong; it’s just that there are different ways of showing different kinds of strength.

Do Linda and Arnold remember what their first impressions were of each other?

But the first time around, I did go to the set before we started shooting. Arnold was well into it before I came in, and I went just to check him out and see what he was like as the Terminator. I remember going, “Ah-huh. He’s going to be good here. Just the way he moves and everything about him.”

Truthfully, in the first film, we weren’t in a lot of scenes together because that was the nature of being pursued by the Terminator—you’re always that close, but rarely sharing any screen time until the very end, when they catch up. So, we were on this for some time.

But when we got together at the discotheque, by the time he catches us in the end, he’s just an endoskeleton—and that’s not Arnold. That’s just a bunch of guys moving mechanical parts (laughs). 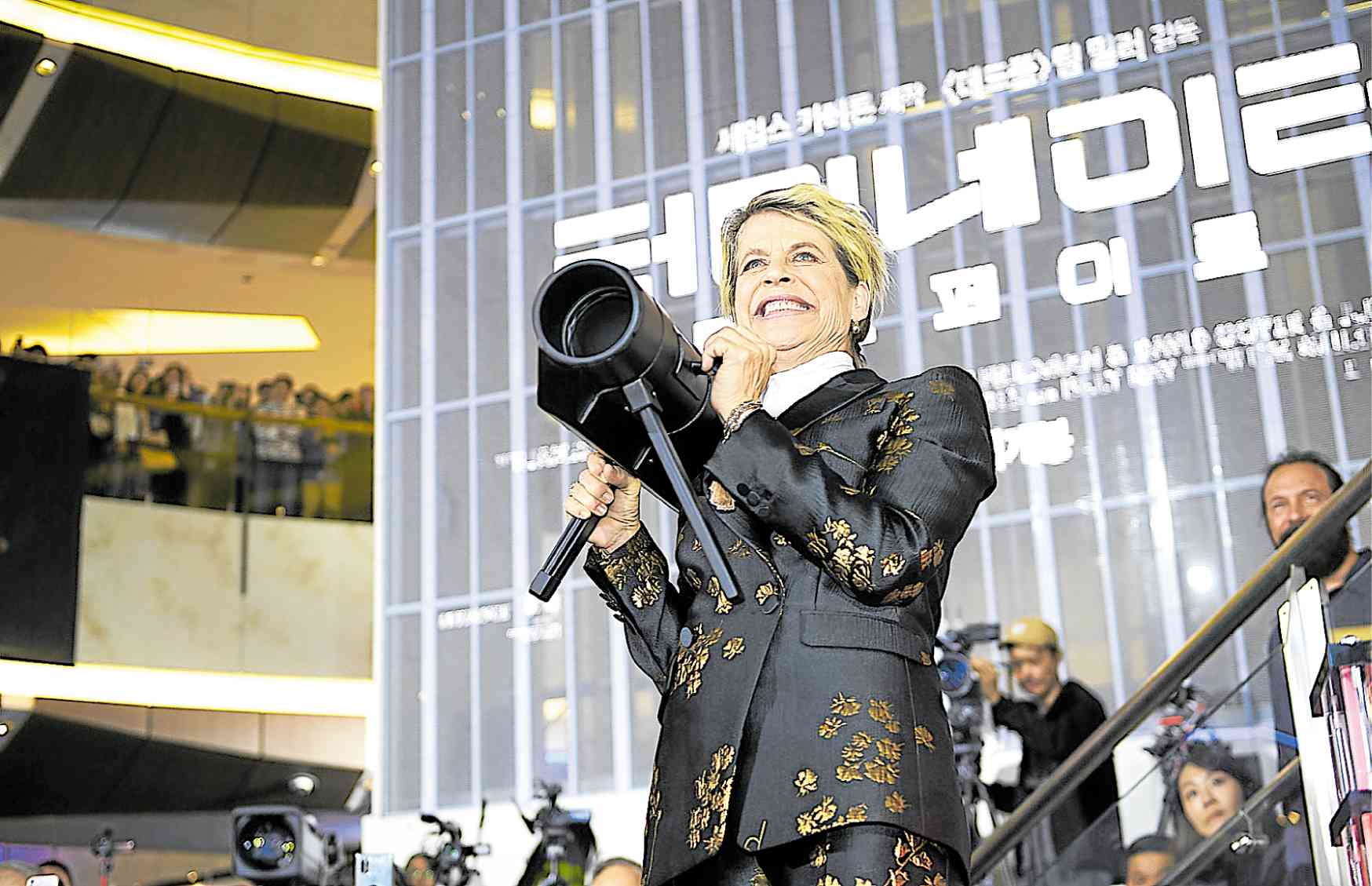 Hamilton at a fan event in Seoul

Any thoughts about robotics and an increasingly mechanized world?

L: A mechanized world is dangerous. Just because we can do it doesn’t mean we should.
For me, it’s simple: It’s just evolution being unable to keep up. We’re trying to make things easier for ourselves, and I’ve seen it in the microcosm of people in Hollywood.

“I’ll be back,” Arnold’s often-quoted line as the Terminator, is popular in pop culture. What was it like for Linda to deliver it?

L: The film is always making a jab at itself. We wanted to present the old thing in a new way. Arnold said it so well, so it’s been quite a challenge for me to say it. That’s been in our brains all those 35 years.
I must have said it like a hundred times (laughs)… 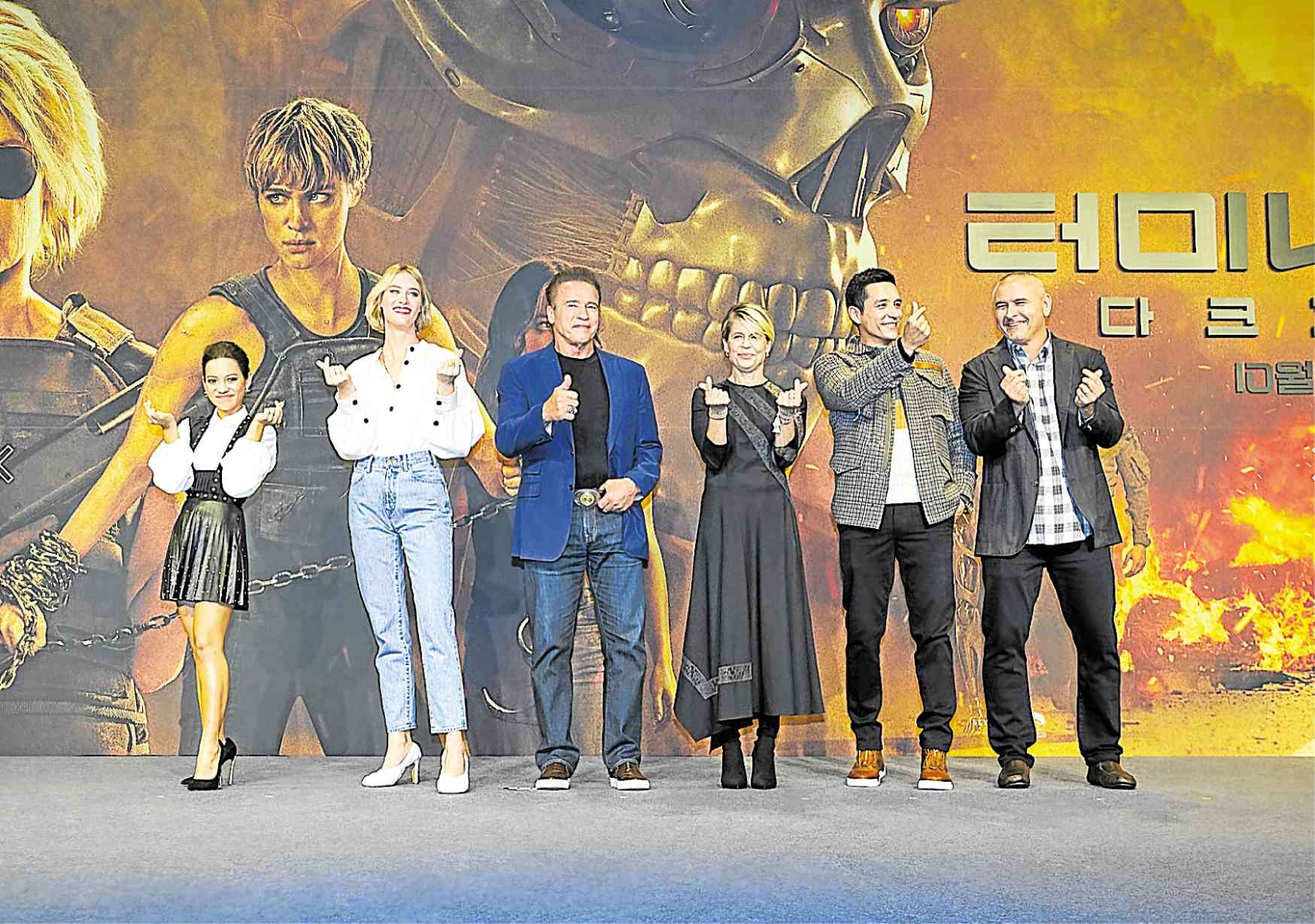 The cast of “Terminator: Dark Fate” with Tim Miller (right)

Arnold, can you talk about the evolution of the T-800?

A: Unlike Linda, whose journey you can follow from the very start, he started out as a one-dimensional character.
But in the second movie, he was programmed to be a protector. This gave my characterization a different spin—which I thought was great.
As a result, he has become not just one of the most memorable villains in cinema; he is also one of its most important heroes.

He’s given a whole new spin in “Dark Fate.” This time, he’s already spent a lot of time with human beings, so he has adapted human characteristics, including that of growing a conscience.

After going against his initial programming, he has developed the ability to take matters into his own hands. That’s what he’s wrestling with and what we see unfold in the movie, which makes him interesting to play. While he’s half-machine, it also makes him half-human—not just physically, but also mentally.