Who is the female superhero? 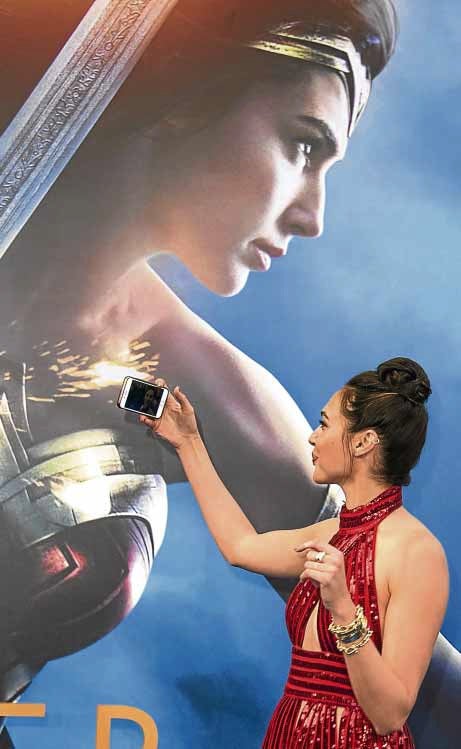 DEFINING CHARACTER Lauren Faust, executive producer of “DC Super Hero Girls,” says female superheroes, like Wonder Woman, must overcome their own flaws and weaknesses, as well as their daily teenage struggles before they take on evil. —AFP

CANNES, France — Meet the new female cartoon superhero: someone who takes no nonsense from anyone and revels in a good fight as much as the boys.

That is how Lauren Faust, the executive producer of the new hit television series, “DC Super Hero Girls,” sees her.

But Hollywood stars Angelina Jolie and Elle Fanning seemed to take a different tack this weekend, days before the premiere of their new movie, “Maleficent: Mistress of Evil.”

They insist that girls being strong is about more than being physically tough.

But Faust told the world’s biggest gathering of makers of children’s entertainment in the south of France that it is not just boys who want to watch their superheroes face off against each other.

“Too many shows for girls are less about entertaining them or reflecting them and come across as lectures on how we expect girls to behave,” Faust argued at MIPJunior in Cannes, which ends on Sunday.

She admitted that “some of the fights get extreme” in her Cartoon Network show, a rebooted version of a DC superhero series now on Netflix.

“Girls have been shortchanged in the cool stakes” for years by traditional television, said Faust, an Emmy winner who previously worked on “My Little Pony” and “Super Best Friends Forever.”

“Girls are portrayed as perfect angels all the time,” she said. “That is why (their shows) end up being very soft and very nice and everyone is very concerned about everybody else’s feelings all the time,” the producer added.

But that is not what young teenage girls want from their superheroes, Faust insisted. “It is important to a degree but not really exciting to watch, and is that something that is going to follow you growing up in your life?”

Instead, Faust said Wonder Woman, Supergirl, Batgirl and the vegan environmental superhero Green Lantern must overcome their own flaws and weaknesses, as well as their daily teenage struggles before they take on evil.

“Our superheroes also have teenage supervillains, and we do not hold back,” she said. “We have episodes when they (the baddies) are trying to kill people.

“In the pilot, when Wonder Woman and Supergirl meet for the first time, they get in a fight and Wonder Woman literally pounds Supergirl’s face into the floor.”

In another, Supergirl is “knocked across the floor and has a huge shiner for the rest of the episode and looks very pained. She really got hit.”

But Fanning, who plays Princess Aurora again in the second “Maleficent” movie, said her character’s “strength is her kindness.”

She said creators are now under pressure to make princesses strong. They want to “make her tough, so we’re gonna make her fight.”

But Fanning asked in comments reported by the BBC: “Is that what being a strong woman means? Like we just have to have a sword and armor on and go fight? Aurora can do that in a different way, in a pink dress, and it’s beautiful that she keeps her softness and vulnerabilities,” she added.

Faust said her female-dominated creative team was turning the stereotype of cartoon action on its head to draw in just as many boys as girls.

The female superheroes team up and often tussle over who is boss with a boy group called the “Invinci-Bros,” although Faust is adamant that they will “stay away from romance. I think on girls’ shows this becomes too much of a focus.”

In the past, she said, female cartoon characters tended to be reduced to “liking shopping, makeup and talking a lot on the phone.”

She said she hoped that “DC Super Hero Girls” might help rectify the superhero gender imbalance.

“If I (were) 16 it would really make me mad” to see Superman being so famous while Supergirl was ‘chopped liver’ with hardly anybody knowing who she was,” Faust added.