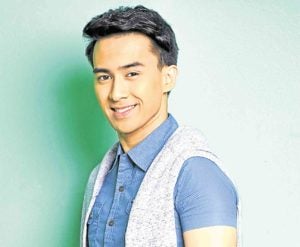 Aside from the celebrity guests’ style choices, another thing show biz kibitzers anticipated at the recent ABS-CBN Ball was the potential crossing of paths among the players in the controversial Gerald-Bea-Julia-Joshua love knot.

But according to singer-actor Young JV, Gerald Anderson’s best friend, no such encounter took place at the swanky party held at the Shangri-La at the Fort.

“I think I saw Julia inside. But Ge and I were together [the whole time] and were enjoying ourselves. And I believe everyone was,” Young JV told reporters at his recent launch as the endorser of Megasoft Hygienic Products’ Fasclean Extra Power Detergent.

“We were just at our table, eating and minding our own business—sa sulok nga kami, eh,” he quipped. “We drank a little, but we didn’t stay long; we headed home soon after.”

Because he’s one of Gerald’s closest pals, the entertainment press can’t help but badger him about the issue, which has yet to have any semblance of closure. Teased for unwittingly becoming Gerald’s “official spokesperson,” Young JV chuckled and said that he actually sort of volunteered for the job.

“I told him, ‘Bro, if someone asks about it, I will [handle it],’” the 29-year-old recording artist said, drawing laughter.

And handle the questions he did. Pressed to dish out on what really happened to Gerald and Bea Alonzo’s relationship, Young JV insisted that, as far as he knew, no “ghosting” happened; and that he has never seen his friend [with] Julia, either.

“He really loves the person (Bea) so much. And I know that because he’s my friend,” he stressed, adding that he’s OK with Bea, whom he has always “respected.”

“I have spent time with her when our friends go out to dinner. I can’t say we’re super close, but she has always been generous to me. So I wish all the best for both parties. I hope this issue dies down, so they could both have a breather,” she said.

Meanwhile, Young JV denied that his latest single, “Malandi Ka”—which he released through his own label, Not So Famous and Star Music—isn’t a pointed diss to any of his past girlfriends or anyone in particular.

“Batu-bato sa langit,” he quipped. “But no, it’s not about a specific person. I believe we can all be flirty to a certain extent, may it be subtle or out there … I was asked if I was worried that people may react negatively to the song. I said no, because it can apply to everyone. I just voiced it out as a songwriter.”

He did admit, however, that although he had been wronged in the past, Young JV said he’s not one to act vengeful.

“I just move on, be better. Take care of yourself. Karma will have its way,” he said. “And don’t let that affect you—that’s the best revenge. Seeing you doing well would be even more annoying to them.” —ALLAN POLICARPIO