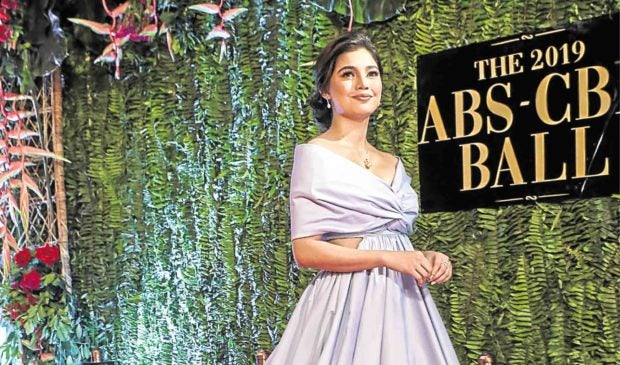 It has been three months since Jane de Leon learned that was chosen to play Darna.

But to this day, she has yet to fully grasp the magnitude of the said project and the impact it could make not only on her career, but also on her life.

“I still can’t believe it. I’m not really sure what they saw in me—I just did my best during my auditions,” she told the Inquirer in a brief chat, moments before she took the red carpet at the 2019 ABS-CBN Ball.

“Just the same, I’m thankful that our bosses saw potential in me; that they believe I have the qualities and what it takes to take on the role,” added Jane, who bested over 200 hopefuls for Star Cinema’s 2020 film adaptation, featuring the iconic Filipino superhero.

The training is reportedly rigorous and physically demanding, so much so that the two previous actresses tapped for the movie were both forced to withdraw due to health issues.

Angel Locsin injured her back. Liza Soberano, meanwhile, felt she wouldn’t be able to perform stunts properly because her broken finger kept hampering her.

Preparations are already underway, and she’s starting to feel the pinch. But she’s up for the challenge. She works out every day and maintains a healthy diet to make sure she has the strength and endurance during training.

“At first, it was difficult, but as we go on, I feel like I’m starting to get used to it … I’m quite athletic; I do wushu,” the 20-year-old Star Magic talent related. “I also have to be mentally strong.”

But more than the role’s physical requirements, she stressed that it’s just as crucial that she embodies Darna’s values. “She and I are both tough … And we’re both willing to sacrifice everything for our families and loved ones,” Jane pointed out.

“The execs wanted a new face for Darna and I was all for it,” he wrote on Instagram. “Thus, open auditions—newbies, celebs, chinita, mestiza, morena, etc. The short list was a good mix, but ultimately, it was about who could carry the role.”

On the ABS-CBN Ball red carpet, she wore a drapey, bluish-grey gown by Vania Romoff. But it wasn’t the outfit itself that had people talking. It was her pendant: a golden South Sea pearl which, observers believed, was a nifty allusion to the stone Narda swallows to transform into Darna.

For her ensemble, Jane was named “Belo Beauty on the Rise,” one of the special awards handed out at the ball.

And as Darna would have probably done herself, the actress donated her winnings to the night’s beneficiary, the Bantay Edukasyon program of the charity organization Bantay Bata 163.

Jane used to be a member of the dance group Girltrends, and had played mostly minor roles in such TV series as “Halik” and “La Luna Sangre.”
“Darna” could potentially catapult her to stardom. “I’m committed, 100 percent, and I will give it my all,” she said.