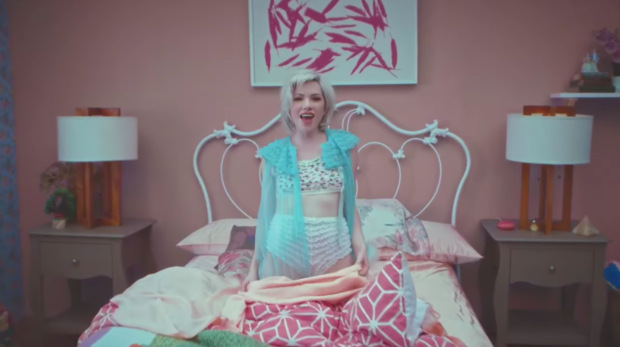 Carly Rae Jepsen in “I Want You in My Room”. Image: YouTube/Vevo

A few months after the album release, the Carly Rae Jepsen has unveiled the accompanying music video for “Want You in My Room,” which was directed by American filmmaker Andrew Donoho.

The colorful visual opens on Jepsen sitting on her bed, as she confirms with her date that he will pick her up in an hour. What follows is a whimsical montage in which she travels to a yard and the beach, all while she is getting ready for her rendezvous.

“When no one loves you like they really mean it/I got you covered, under covers/Can you feel it?,” she cheekily sings over a saxophone-infused melody.

Watch the music video below:

“Want You in My Room” is the latest single from “Dedicated” to get an accompanying video, following “Now That I Found You,” “Too Much” and the bonus cut “Party for One.”

The album, which marks Jepsen’s fourth studio effort, was recorded between Sweden, Nicaragua and Los Angeles, where the singer is currently based.

In an interview to Rolling Stone, Jepsen revealed that she had written over 200 songs for the follow-up to “Emotion,” which was originally supposed to be a disco album.

“I rarely write a song and am like, ‘It’s done!’. It’s sort of my passion and obsession in a way: late at night being like, ‘I found the lyric!’ I envy writers that are like, ‘I just wrote this and put it on the album.’ I’m like, ‘How do you sleep at night?!,'” she explained.

The singer-songwriter is currently on tour across the world to support her latest album, “Dedicated”. NVG