Don’t get us wrong—that isn’t exactly a warning: It has low-brow froth fueling its winking misogyny, but at least it’ll keep viewers entertained.

Actually, there’s something “instructive” about Janno Gibbs, Andrew E and Dennis Padilla’s starrer: For millennials who are wondering about the kind of cheeky humor that had “mababaw-ang-kaligayahan” moviegoers rolling in the aisles in the ’80s, this is the film to see.

Moreover, it has “inspired” sequences that more than make up for its ludicrous inanities.

That isn’t always a bad thing, mind you—sometimes, mindless fun is just what the doctor ordered to spread much-needed cheer.

In the zany flick, Johnny (Janno Gibbs) stands to inherit his estranged dad Don Roberto Endrinal’s (Johnny Revilla) hacienda—if he can stop the wily machinations of Mr. Flores (Eddie Garcia in his final role) from turning his dead father’s vast farmland into a casino complex and gambling haven.

To convince Johnny to sell his inheritance for P100 million, Mr. Flores pays his henchmen to put poison in the irrigation system to make the plantation less productive.

Helping Janno execute the film’s old-fashioned jokes and wisecracks are Andrew E (Andy) and Dennis (Dondon), who help bring out the production’s viewer-worthy elements—not the least of which is the versatile and very funny Louise delos Reyes, as blind “tour guide and eyewitness” Sam.

This film demonstrates that Louise’s comedic timing is as sharp as her tried-and-tested dramatic chops.

While it’s true that there are sexist jokes that “objectify” the movie’s bevy of bodacious beauties, it doesn’t take long before you realize how they’re all taken with a grain of salt.

Here’s a sample of a gag that had the audience laughing: In one scene, Andrew tells Louise that being handsome runs in his family’s blood (“Nasa dugo namin ang pagiging guwapo”).
Without skipping a beat, Louise replies with a quip: “Sana, hindi lang sa dugo; sana, sa mukha rin.” 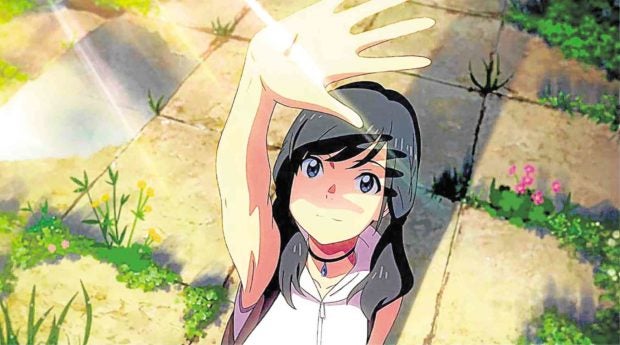 Scene from “Weathering With You”

If you’re in the mood to fall in love, you won’t find a more original story to get inspired by than the animated romance, “Weathering With You,” helmed by Makoto Shinkai (“Your Name”).

It’s about 16-year-old Morishima Hodaka (Kotaro Daigo), a high school student who runs away from home to work as a reporter in the big city, but ends up falling in love with Amano Hina (Nana Mori), a mysterious girl who brings “sporadic bursts of sunshine” to rain-drenched or snow-soaked Tokyo.

Hina is just coming to terms with her newfound powers, which developed a year ago as her mom was on her death bed.
But tragic fate is said to await the so-called “Weather Maiden,” whose “gifts” are slowly taking a toll on her 15-year-old body.

Hodaka wants Hina more than her metahuman skills (“I want her more than any blue sky,” he explains). But something happens to Hina just as he’s about to declare his love for her.

With many complications rearing their ugly heads, does Hodaka and Hina’s budding romance stand a chance at Happily Ever After?