Yes, yes, I’m willing to do a movie with Sharon,” Gabby Concepcion told us with a sly grin, even before he could sit beside us for a quick chat. Right there and then, we were convinced that the dashing actor could also pursue a lucrative career as a psychic if he got tired of acting.

But it sure seemed like Gabby, who has remained swoon-worthy at age 54, knew the issues we were going to raise following days of intense speculation and renewed interest just days after Kris Aquino announced her willingness to produce the “on-again, off-again” Sharon Cuneta-Gabby Concepcion project that couldn’t seem to get off the ground. 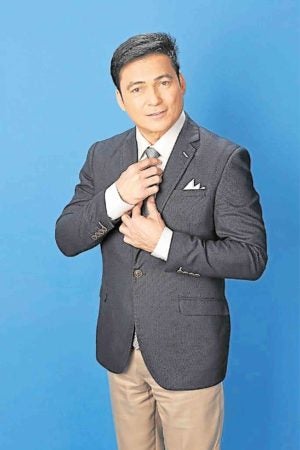 We had a lot of fun when we crossed paths with the Kapuso star at GMA 7’s recent visit to Davao City to promote its shows and their stars. He knows how to turn on the charm, whether he’s with inquisitive writers or performing in front of starstruck fans.

In fact, when it was Gabby’s turn to sing his solo number for GMA’s Kadayawan show at SM City Davao, it was hard not to notice his choice of song: “Kahit Maputi na ang Buhok Ko,” which was first popularized by his Megastar ex-wife in the ’80s.

Last year, the eagerly anticipated movie reunion of the biggest love team of the ’80s seemed like it was finally going to happen after the couple’s commercial for a burger chain became YouTube’s most popular ad in the Philippines for the first half of 2018.

However, as quickly as interest for it hit fever-pitch, the project’s prospects dissipated soon after.

But hope springs for the fans and followers of the Sha-Gab tandem.

Gabby has consistently appealed to the press not to talk about it, but he knows only too well it’s almost a losing proposition. So, he has cleverly turned the issue into a running gag that pops up even when he’s answering questions about his “Love You Two” series or his portrayal of its male lead, Jake Reyes.

“Masyado kasi nilang sineseryoso, eh,” he quips with a shrug of resignation.

So, let’s change the subject: How does Gabby relate to his character, Jake, who’s torn between sisters Raffy (Jennylyn Mercado) and Sam (Shaira Diaz)?

“It’s hard to relate to his dilemma kasi hindi pa naman ako naka-experience na may pinagsabay (laughs),” Gabby winkingly laughed at the double entendre. “Another thing I can’t relate to is having two girlfriends who are sisters. I know an actor who has that dilemma, but I can’t name names because he’s with the other network (laughs)—maybe I should ask him how he feels about that.” 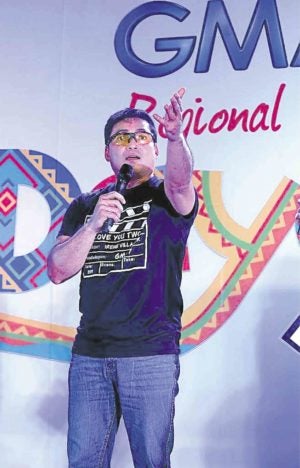 But we told Gabby that the unceasing fascination for his love team with Sharon could be attributed to its enduring popularity and crowd-drawing appeal—even if they don’t seem to like each other so much these days.

After all, it’s been 27 years since “Tayong Dalawa,” their eighth—and last—film together, was released.

“Well, that’s probably because in the ’80s, there weren’t as many love teams yet—there were probably four then. Ngayon, sangkatutak ang love teams,” he observes. “Also, kami lang yata ang naging true to life, and we had a daughter (KC).

“We didn’t do any movie in 1983, then we did ‘Dapat Ka Bang Mahalin’ in 1984. In between those, she did movies with Rowell (Santiago) and William (Martinez).

“Nagkaroon kami ng fan base. Those fans are now parents, who continue to watch our movies with their children. So, they developed awareness about us because paulit-ulit nila kaming naririnig.”

How does Gabby manage to keep playing male leads in TV shows like “Love You Two” and movie projects like “Man and Wife,” his recent starrer with Jodi Sta. Maria?

“It’s healthy to portray different roles occasionally,” he says. “You can’t be bida all the time. I also do cameos from time to time, like my characters in ‘Diary ng Panget’ and ‘Crazy Beautiful You’—it’s also nice to see what’s on the other side. In ‘Diary,’ halos hindi ako makilala because I decided to wear glasses, as James [Reid’s] dad.”

The rest of our Q&A with Gabby:

You’ve had so many leading ladies through the years. Which other actresses are on your wish list? I have yet to work with Marian Rivera, Heart Evangelista, Anne Curtis and Cristine Reyes. Marami pa.

You made so many women swoon when you were introduced in Closeup commercials 40 years ago. What’s the secret behind your longevity and popularity as a leading man? Grabe (laughs). Time flies, indeed. The first one was in 1979, then there was another in 1981. As far as longevity is concerned, timing and pacing are important. Siguro, kung hindi ako umalis, it would have been a different story.

When I left for the US (from 1993 to 2008), nagkaroon ng void sa leading men. People noticed a change in viewers’ priorities in the ’90s—humina ang pelikula, and there was a shift to telenovelas as the TV industry continued to evolve.

Suddenly, people weren’t sure what was going to happen with their careers. So, they were taking roles they didn’t usually play, while others got offered roles that weren’t always offered to them.

I think that’s how Albert Martinez solidified his status as a mainstream player, since Aga Muhlach and Richard Gomez weren’t accepting the roles that were usually meant for them. In the ’80s, William was more popular than Albert, who largely benefited from the paradigm shift in the ’90s.

Noon kasi, if you are seldom seen in public, it was OK, kaya may mystery.

In fact, in (LVN Pictures founder and producer) Doña Sisang’s time, they didn’t want their movie stars to be seen in malls hobnobbing with the public. But since the dawn of the internet and social media, it has become a necessity to be “seen” everywhere. If you’re not part of it, you don’t exist!

You seem to enjoy posting on social media… Yeah, but neither as much nor as often as others. I remember my father saying, “Nandyan ka na lang din, galingan mo na. Find something in it that you like to do, so it doesn’t feel like work. I have learned to adapt and go with the flow.

Times are changing. Now, everybody has a cell phone. If you don’t know how to use the internet, you’ll be left out.

It’s like going to school—if you don’t do your homework, you won’t know what to do the next day.