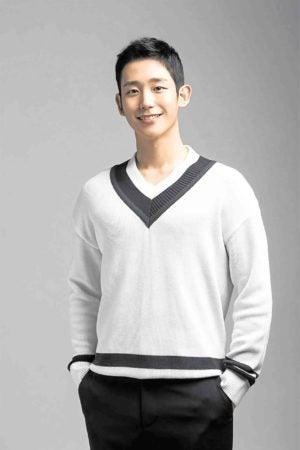 Jung Hae-in got his first taste of acting through the various musical plays he took part in back in college. But it wasn’t until during his military service later on when he finally decided to try his luck and pursue a career in entertainment.

In 2014, he officially made his show biz debut after landing a supporting role in the romantic comedy television series “Bride of the Century.” He was 26, which, by industry standards, is considerably late for an aspiring actor.

But starting out at the age he did wasn’t necessarily a disadvantage. For Hae-in, now 31, it was actually quite the opposite. All the life experiences he has had made him only better equipped to deal with the world he entered.

“There’s no regret at all for not starting this career earlier,” he told the Inquirer in an email interview arranged by the local promoter Wilbros Live. “Every moment is precious, because I think the days prior to my debut was also a preparation time to do my job better.”

Hae-in’s popularity continued to grow as he booked one project after another, both in television and film.

The fantasy romance series “While You Were Sleeping” piqued the interest of netizens in him, so much so that he reportedly became the most searched term in the Korean web portal Naver at the time of the program’s airing in 2017. That same year, Hae-in had critics and fans alike talking about his acting skills with his performance in the black comedy “Prison Playbook.”

In 2018, Hae-in scored his first lead role in “Something in the Rain”—the Netflix-distributed, romantic drama series that turned him into a star big enough to hold fan meetings around Asia, shortly after the said show aired.

Excerpts from our interview with Hae-in:

What was your impression of your Filipino fans, especially after meeting them here last year? They were very passionate and kind, so I was so grateful to them.

Can you give us an idea of what kind of activities you have in store for them? I practiced singing a lot. I hope you can hear me singing better than last year.

What was your funniest or craziest fan encounter? When I filmed the variety show “Funding Together,” one of the cast (member) was a fan. So I was very surprised.

Can you talk about your upcoming movie, “Tune in for Love”? “Tune In for Love” is a romance film with a retro mood, about Mi-soo and Hyun-woo, who meet each other by chance, just like how a song coincidentally plays on the radio. The story of the movie goes on with the two keeping their feelings for each other, and repeat meeting and breaking up from 1994 to 2005.

How would you compare working for a film and a television series? If I have to find the difference between films and television series, it seems like dramas need long-term perspective when it comes to acting than movies. However, I think the boundaries between movies and dramas are now disappearing due to changes in the filming environment.

If you weren’t an actor, what career path would you have taken? I might have thoughts about other career, but I think I would choose to become an actor eventually.

What has been the biggest challenge you have faced as an actor so far, and how did you overcome it? Every moment, every work is challenging and difficult for me. There was no easy work. I sincerely focused on the script and tried my best to act based on the trust in my partner actors and the team I was working with.

TAGS: Jung Hae-in, One Summer Night, Tune in for Love, While You Were Sleeping