The K-Pop beginner’s guide to EXO

K-Pop fever is stronger than ever, and one of the biggest boybands to capture the hearts of fans not only in the Philippines, but on the entire planet, is EXO. Local K-Pop fans are in for a treat this month, as Globe will be bringing EXO to the country again for EXO Planet #5 — EXplOration in Manila at the MOA Arena on August 24. If you’ve just begun your K-Pop journey and want to get the lowdown on this Seoul-based supergroup, here’s a guide that will tell you the basics you need to know.

It’s hard to pick just one EXO song as your favorite, but it should be easy for you to choose as many as you like. Here are a few to start with.

“Growl” is known as EXO’s groundbreaking single. It’s catchy and danceable, a pop ditty that ticks all the boxes when it comes to becoming an instant hit. The 2016 hit “Monster” on the other hand, is an addictive mix of EDM and hip-hop that talks about love and obsession, while “Call Me Baby” is a smooth track made for both dancing and easy listening.

“Ko Ko Bop,” a track from the band’s 2017 album The War, shows us a different kind of EXO. It has elements of reggae and electronic to it, with heavy bass lines and guitar licks blending perfectly with drum beats and laser sounds. “Overdose,” one of the group’s earlier hits, is a seductive blend of R&B and hip-hop that lyrically compares physical attraction to—you guessed it—a drug overdose.

“Mama” is a song all K-Pop fans should have on their playlists. EXO’s debut single is emotive at one point and danceable the next. It starts with a spoken intro, segues to beguiling chants, and then flourishes into an edgy dance track.

K-Pop music videos aren’t just about the music. Each video is a major production that overwhelms the senses and tickles the imagination. Highly stylized choreography and striking costumes are a given, but what makes one video different from the next are the unique little stories that unfold as you go from one video to the next.

The music video for “Monster” features EXO’s members in an apparently bruised state, clad in all-black attire, with a long dining table, snake, and a burning vehicle thrown into the mix. On the other side of the spectrum is the relaxed, summery vibe of the video for “Ko Ko Bop,” where you’ll see the boys wearing candy-colored outfits.

Another standout music video is the one for “Overdose,” which is laced with mystic elements you’ll find right at the beginning.

Topping this list is the music video for “Power.” It’s a mix of live-action and animated sequences, and you’ll see the boys fighting a robot in a video game-like universe.

EXO has reaped over 20 Daesang awards from various award-giving bodies and bagged seven Album of the Year trophies over the years. The group earned a Guinness World Records recognition for bagging the most Daesang awards at the Mnet Asian Music Awards. Forbes recognized the members as the most powerful celebrities in South Korea for 2015 and 2016.

Before 2018 ends, EXO was recognized as the “Quintuple Million Seller Artist” with their fifth full-length album, Don’t Mess Up My Tempo after selling over 1.1 million copies in just 10 days. This hit album has garnered several awards including the Bonsang Prize from the Golden Disc Awards and made EXO the first ever KPop act to sell a cumulative of 10 million albums in Korea among artists who debuted after the year 2000. At the same time, EXO won the Hallyu Star Award at the 2018 Seoul Music Awards and has also been nominated at the 2019 Billboard Music Awards for the Top Social Artist recognition.

These talented young men will be in Manila very soon, but until then, all we can do is contain our excitement and feast on their songs, photos, and videos, online. Want to keep updated on your favorite K-Pop stars? Join K-mmunity PH at glbe.co/KmmunityPH so you can be the first to know about upcoming K-Pop events, and bond with fellow K-Pop fans.

Most recently, Globe has brought massive K-Pop acts like TWICE, BLACKPINK, Wanna One, and Super Junior to the country to satiate the K-Pop cravings of Filipino fans. With more exciting artists like EXO lined up, Filipino fans are sure to experience world-class music entertainment—a commitment that Globe will continue to strengthen for years to come. Don’t forget to follow Globe ICON on Facebook and Instagram. 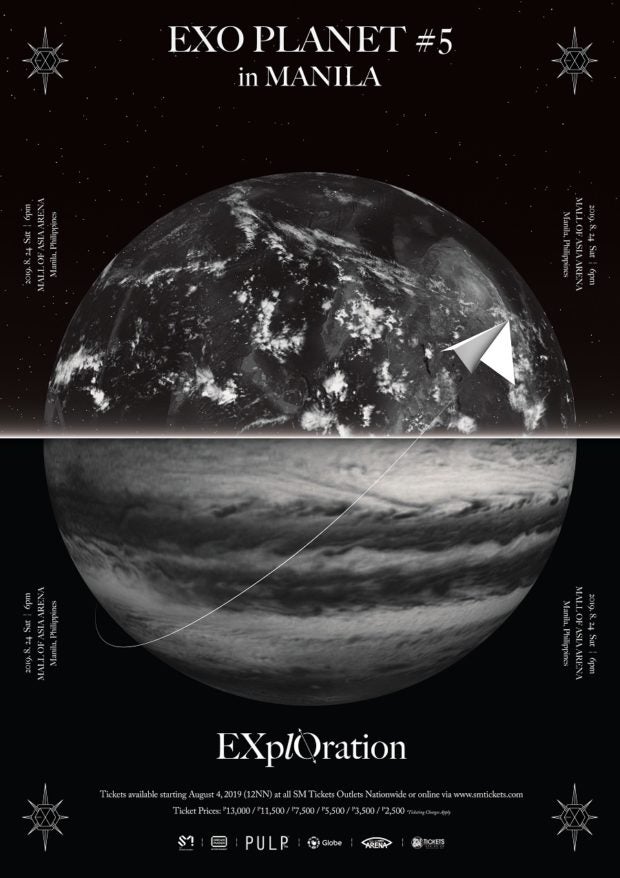