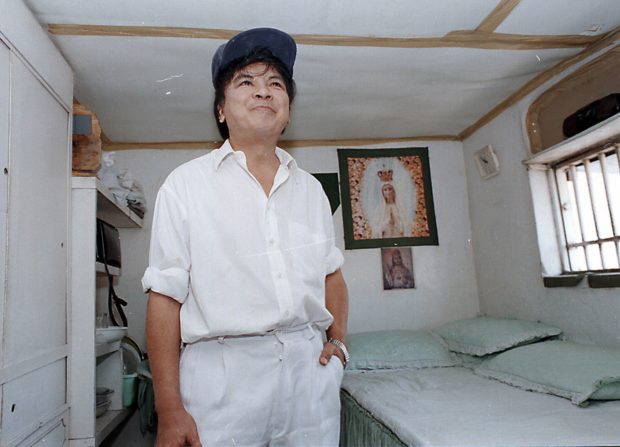 Showbiz personalities vented outrage over the possible early release from prison of former Calauan Mayor Antonio Sanchez, who was convicted in the rape-slay of college student Eileen Sarmenta.

Sanchez and the six men who raped Sarmenta, a University of the Philippines Los Baños (UPLB) student, were each sentenced to seven 40-year prison terms.

However, because of a Supreme Court (SC) decision, over 10,000 inmates could be freed under a new law that increased the Good Conduct Time Allowance (GCTA) given to inmates. Among them is the former Calauan mayor, who has only served over two decades of his sentence.

READ: Antonio Sanchez, more than 10k other inmates to get out of prison ‘soon’

Director Antoinette Jadaone posted on Instagram today, Aug. 22 an image which says “No to Sanchez’s release”. The caption contained disturbing details of the case as written in a public Facebook post by journalist Desiree Carlos.

In the comments section of Jadaone’s post, actresses Angelica Panganiban and Angel Locsin expressed disgust at the possible release.

“This is pure EVIL. Nakakanginig laman (It makes your insides tremble),” Locsin concurred.

Singer Bituin Escalante recalled on Twitter today that she was studying in the same school as the victims when the case was ongoing.

“I was in my Freshman year in UPLB when Eileen Sarmenta and Allan Gomez were abducted, dehumanized and murdered. This case was one of the few times our justice system actually worked and now these new monsters in government seek to reverse that,” she said.

She noted that the law which rewards good behavior should not be applicable to Sanchez given that illegal drugs have been found in his cell and that he has been “living a life of luxury in his jail cell.” She said too that he had never paid reparations nor apologized to the victims’ families.

Director Quark Henares recalled on Twitter that the incident opened his eyes to some harsh realities of when he was in elementary school. “I was in the Seventh Grade when Mayor Sanchez killed Eileen Sarmenta. That’s when I first heard about pedophilia and gang rape, and when I realized the world was not a nice place. I got a physical reaction finding out he was freed.”

I was in the Seventh Grade when Mayor Sanchez killed Eileen Sarmenta. That’s when i first heard about pedophilia and gang rape, and when I realized the world was not a nice place. I got a physical reaction finding out he was freed.

TV host Bianca Gonzalez said there are many more who deserve second chances, such as those who have committed petty crimes like stealing phones or canned goods to provide for their families.

Actor Bart Guingona also questioned Dela Rosa’s statement, given that he spearheaded the drug war which has killed innocent people, including children. He tweeted, “Pero ayaw niyang bigyan ng second chance ang iba. Patay agad. Ano ba?” (But he does not want to give others a second chance. Kill in an instant. What is up with that?)

“Nakakagigil (Infuriating),” talent manager Ogie Diaz said of the statement, wondering if Dela Rosa would say the same had the incident happened to his own family.

Veteran actor Edu Manzano wondered on Twitter if the other inmates who were set to be released had crimes as grave as Sanchez’s: “Were all the other 11,000 inmates also convicted of rape and murder? What don’t they get about multiple life sentences?”

Were all the other 11,000 inmates also convicted of rape and murder? What don’t they get about multiple life sentences? #calauanlaguna #heinouscrime

Both Escalante and Gonzalez urged the public to sign a petition addressed to the Department of Justice to keep Sanchez in prison “for full justice to be served”.

Sarmenta and her companion, fellow UP student Allan Gomez, were abducted by Sanchez’s henchmen, with Sarmenta reportedly presented as a “gift” to the ex-mayor. Gomez was shot dead while Sarmenta was gang-raped by Sanchez and his six aides. She was then shot in the head with an Armalite rifle. JB

Antonio Sanchez was convicted of 2 other murders

Read Next
Ion Perez denies being in a relationship with Vice Ganda
EDITORS' PICK
Beyond the Chocolate Hills: A farm-to-table, heritage culinary adventure of Bohol
Metro Manila logged most number of new COVID-19 cases — OCTA Research
WHO says monkeypox is not yet a health emergency
A massive highway complex makes living in the South highly attractive
Guarding Sara: Why next VP is getting own security team
House energy committee chair Arroyo bats for cheap electricity
MOST READ
Leon Barretto steps up for sisters, asks dad Dennis Padilla: ‘Please stop resorting to public shaming’
LOOK: Rita Daniela pregnant with first child
Marjorie Barretto to speak up on Dennis Padilla, kids’ relationship ‘in time’
Bea Alonzo, under lie detector test, says she wants prenup agreement with future husband
Follow @NGunoINQ on Twitter
Don't miss out on the latest news and information.