Against all absurd odds 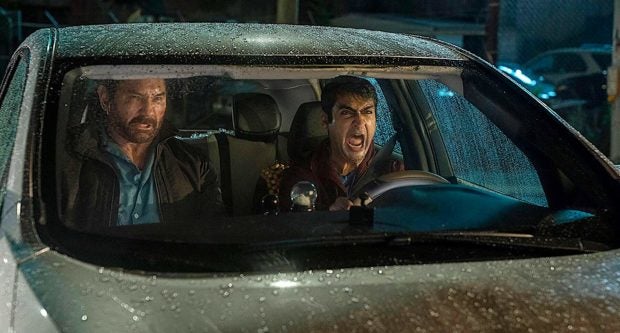 They make an unlikely match, but the odd-couple pairing of Dave Bautista and Kumail Nanjiani gives “Stuber’s” messy mesh of derivative ideas a viewer-pleasing boost.

Who would have thought that the former, a six-time world wrestling champion who holds the record for the longest reign in the heavyweight category, would click with the latter, who’s no slouch in his day job as an Oscar-nominated stand-up comedian?

“Guardians of the Galaxy’s” Drax the Destroyer has Filipino blood running through his veins, while Kumail, best-known for “The Big Sick” and “Silicon Valley,” is Pakistani-American.

Dave and Kumail’s first movie together, “Stuber,” which began its theatrical run in the Philippines yesterday, is uneven at best.

But while its pool of gags is shallow, its lead stars’ refreshing antics outweigh the comedy actioner’s lukewarm hilarity—against all absurd odds. Unknown to Stu, however, the mission is more personal to Victor than it initially appears because, six months ago, Vic’s rookie partner Sara (Karen Gillan) fell victim to Oka’s unflinching cruelty and died in the line of duty.

As they hopscotch from Koreatown to a male strip club, Vic and Stu end up rescuing a dog that has gotten on drug traffickers’ bad side. But as they discover more about each other, they realize there’s more to their partnership than fleeting coincidence.

The comedy-action hybrid has been served well by the likes of “Lethal Weapon,” “Rush Hour” and “Bad Boys.”

For its part, while “Stuber’s” novel team-up eventually overstays its welcome, the briskly paced and comedically compelling movie is a good enough introduction to a new tandem that should have been served well by a fresher and more original concept.