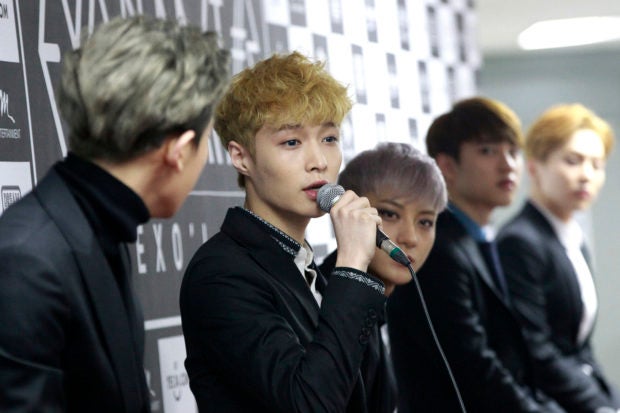 HONG KONG — At least eight pop stars from mainland China and one each from Taiwan and Hong Kong are publicly stating their support for Beijing’s one-China policy, eliciting a mixture of disappointment and understanding from fans.

Many of the statements came after protesters opposed to Beijing’s growing influence over semi-autonomous Hong Kong removed a Chinese flag and tossed it into Victoria Harbor earlier this month.

Lay Zhang, Jackson Wang, Lai Guan-lin and Victoria Song were among the K-Pop singers who recently uploaded a Chinese flag and declared themselves as “one of 1.4 billion guardians of the Chinese flag” on their official Weibo social media accounts. Wang is from Hong Kong and Lai is from Taiwan.

Some see the public pronouncements as the latest examples of how celebrities and companies feel pressured to toe the line politically in the important Chinese market. Yet they also coincide with a surge in patriotism among young Chinese raised on a steady diet of pro-Communist Party messaging.

Song and Zhang, a member of popular group EXO, have shown their Chinese pride on Instagram. In Song’s case, she uploaded an image of the Chinese flag last week with the caption “Hong Kong is part of China forever.” Such posts would only be seen by their international fans because Instagram, like most Western social media sites, is blocked by the ruling Chinese Communist Party’s censors.

For over a decade, South Korean entertainment agencies have been grooming Chinese singers to be part of their Korean pop, or K-pop, bands in an attempt to win over the massive mainland Chinese market. Only a few made it to a much-coveted debut. But a number of Chinese K-Pop stars — citing unfair treatment — left their K-Pop groups to pursue lucrative solo careers in mainland China. 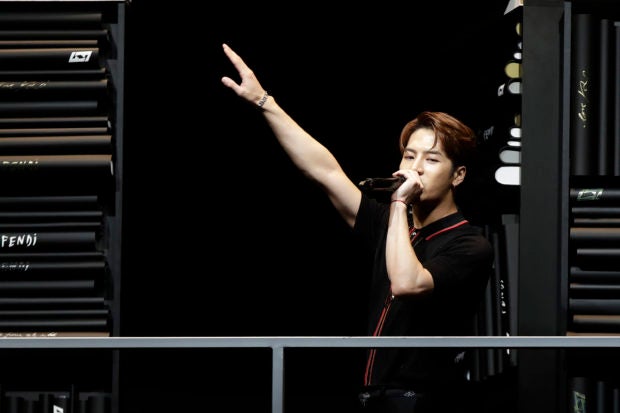 Hong Kong singer Jackson Wang performs at the end of the Fendi men’s Fall-Winter 2019 to 2020 collection, which was presented in Milan, Italy. Image: AP/Luca Bruno

K-pop fans reacted swiftly to the avowals of allegiance to China. Some called it shameful, while others were more understanding.

Erika Ng, a 26-year-old Hong Kong fan of Wang, was not surprised by his statement. She said he “values the China market more than the Hong Kong market” because of his large presence in the mainland.

Wang, a member of the group GOT7, used to carry a Hong Kong flag and wear a hat with the city’s symbol, a bauhinia flower. Lately, he has been carrying a Chinese flag on his concert tour and was wearing a China flag hoodie in his music video.

Ellyn Bukvich, a 26-year-old American who has been an EXO fan for five years, said many young fans will probably support Zhang and his message because of his status as a K-Pop idol.

“It is spreading propaganda and it is very effective,” Bukvich said.

The one-China policy maintains that there is only one Chinese government, and it is a key diplomatic point accepted by most nations in the world, including the United States. It is mostly aimed at the democratic island of Taiwan, which Beijing sees as a breakaway province to be reunited with the mainland by force if necessary.

In the case of Hong Kong, a former British colony handed back to Chinese control in 1997, Beijing maintains a “one country, two systems” policy in which the city is guaranteed greater freedoms than those on the mainland until 2047.

China’s government and entirely state-controlled media have consistently portrayed the Hong Kong protest movement as an effort by criminals trying to split the territory from China, backed by hostile foreigners.

International brands — from fashion companies to airlines — have been compelled to make public apologies for perceived breaches of that policy, such as listing Taiwan and Hong Kong as separate countries on their websites or on T-shirts.

The statement in a Weibo post was prompted by Samsung having separate language options for users in Hong Kong, China and Taiwan on its global website. Both Hong Kong and Taiwan use traditional Chinese characters instead of the simplified ones used in mainland China, and Hong Kong also has English as an official language. Samsung declined to comment on whether it will continue to provide different language options for Taiwan and Hong Kong.

It can be difficult to know whether loyalty vows to Beijing are heartfelt or for commercial reasons. The past is littered with examples of celebrities, both Chinese and foreign, who saw their business in China destroyed after the party objected to a statement or an action.

In 2016, Taiwanese K-Pop star Chou Tzuyu made a public apology for waving the Taiwanese flag while appearing on a South Korean television show. A Chinese vilification campaign against her led to a backlash among some Taiwanese, who at the time was in the midst of a presidential election eventually won by Tsai Ing-wen, who is despised by Beijing for her pro-independence stance.

Public support for Beijing has not been limited to pop stars.

Liu Yifei, the Chinese-born star of Disney’s upcoming live-action version of the film “Mulan”, weighed in on the situation in Hong Kong, where protesters have accused police of abuses.

“I support the Hong Kong police,” Liu, a naturalized American citizen, wrote on her Weibo account. “You can all attack me now. What a shame for Hong Kong.”

Some questioned her motives, wondering if the post was calculated to ensure her film is released widely in China — the world’s largest film market. Among Hong Kong protesters, there were swift calls for a boycott of the film when it is released next year. HM/NVG