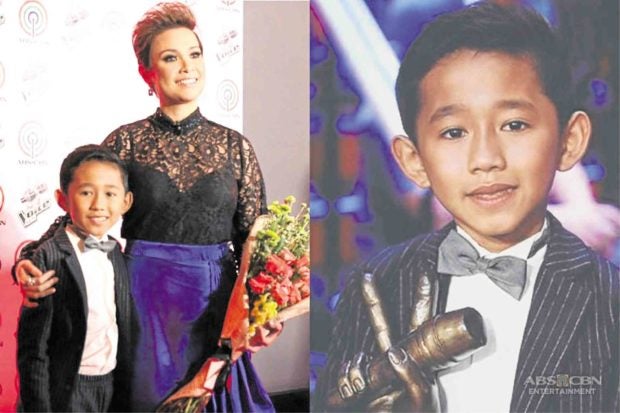 The author (right) with Joshua Oliveros

I can’t recall looking forward to another season of “The Voice Kids” this much. Talk about starting the show with a bang!

Since the finale of the previous “Kids” season, we’ve been running around busy with our individual endeavors (all the coaches regularly perform in concerts both here and abroad), and the staff at the network has had other shows to look after.

Our last champion, Joshua Oliveros of Team Lea, was crowned a little over three years ago, so the time was right to pick up right from where we left off.

And for this season, Sarah Geronimo has returned.

She did come back to the fold with “The Voice Teens” two years ago, when one of her artists, Jona Soquite, was crowned the champion. But she skipped one season of “Kids” (Sharon Cuneta came in to coach for that season). I’m sure her appetite for winning has more than returned, which means she’s someone Bamboo and I will have to keep our eyes on.

Last weekend, you had a sampling of the amazing kids that we’ve listened to during Blind Auditions. So far, six young artists have come through: Ramjean Entera, Amier Asilo and Vanjoss Bayaban (Team Sarah), Tiffany Vistal and Lovelyn Cuasco (Team Bamboo) and Alexa Salcedo (Team Lea). They’re from different parts of the country, which makes me marvel at the width and the depth of talent on our shores.

Along with the triumphs though, we’ve also had to say no to kids who, although talented, were just not quite ready yet. The two young men we’ve met so far, Rainier Oreta and Biboy Betonio, have something that can be developed, so I’m hoping they try again. (By the way, there’s nothing in the rulebook that says you can’t give it another go if you didn’t make it the first time.)

Please keep tuning in every weekend. There are even more surprises in store, and more incredible young artists to root for. Don’t settle on one artist just yet; open your ears and hearts to what is still to come.

This week, the coaches and artists prepare for Battle Rounds. Let the battles—and the stress—begin!

“The Voice Kids” airs on ABS-CBN every Saturday and Sunday at 7:45 p.m.