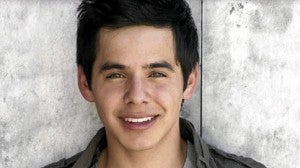 TV5 scored a casting coup when it got popular young American singer David Archuleta to star in the local teleserye, “Nandito Ako,” along with Jasmine Curtis and Eula Caballero. We had hoped that the relatively untested singer-actor would surprise viewers with a fresh, vital and felt portrayal, and affirm his evolving versatility as an all-around talent. Alas, that exciting epiphany hasn’t happened.

In recent telecasts of the new drama series, Archuleta has come across as well-meaning, sincere, eager to please, sometimes sort of cute, even frisky. But as an actor, he just can’t get his act together.

Actors are supposed to understand and embody the character they have been assigned to play, and to infuse the role with insights related to motivation, backstory, driving needs, emotional agenda and relationships with other characters, etc.

From Archuleta’s portrayal thus far however, we get very few such insights and “texture,” aside from his character being basically a nice Fil-Am guy who is trying to do a good job as an entertainer while reconnecting with his Filipino roots here, despite being stifled by his manager.

In fact, Jasmine’s character has a more dynamic and contentious backstory, relative to her “poor” origins and her urgent need to improve her and her loved ones’ financial status. It is also hinted that there may be more to her relationship with her wealthy best friend, played by Eula, than meets the eye.

All these intimations make for a more interesting character than the bland “nice guy” David has been assigned to play. It may be too late to hope that he develop more color and strength of character in the last few days (the series winds up this week). A pity, because he is the star of this show, not his leading ladies.

The series has done well by showcasing the young actor’s singing talent, but it was his emergence as a first-time thespian that was to be the main attraction. His mentors should have helped him more in this regard; now they may be faulted for turning a golden opportunity into dross.

As for Jasmine, her “feisty” role has given her the opportunity not to be so boringly nice as she was in an earlier TV outing of hers that we caught some months ago, and that is all to the good.  But her palaban projection should be balanced by a kind of bruised vulnerability that is not yet evident, in her performance. She has much more to do in this regard.

As for Eula, she is limited by her “rich girl” stereotype, so she should have added more color, texture, and unexpected “contradictions” to her portrayal to make it more dynamic and empathetic.

But the bulk of the work was in David’s purview. He had the toughest challenge here – to go from good singer to even better actor. Viewers may now be wondering what he did all that for. The talent fee he has reportedly received may be impressive, but he was supposed to prove that he was worth it. So, next time, no more Mr. Nice Guy, please?