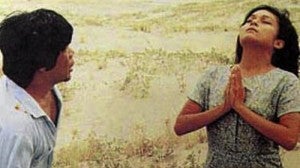 “HIMALA,” top-billed by Nora Aunor (right), was shot in Ilocos Norte for three weeks in 1982.

In what has been dubbed by the Inquirer as the “SandDunes” festival, film screenings will be held in the picturesque “desert” of Paoay, Ilocos Norte.

The provincial government, led by Ilocos Norte Gov. Imee Marcos, is cooking up a multifaceted, multimedia festival that will feature sand-boarding and 4 x 4 dune-buggy competitions, along with sand castle-building contests and other sporting and art activities – all envisioned to entice the youth.

Completing the lineup of activities is a screening of films, both local and foreign, that were shot on Paoay’s sand dunes.

Marcos proudly noted that an Oscar-nominated Hollywood film had been shot in the province – Oliver Stone’s “Born on the Fourth of July” (1989), top-billed by Tom Cruise and for which Barangay Suba stood for locations in Vietnam and Mexico. 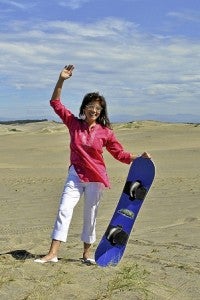 Marcos related that Brillante Mendoza, best director in the 2010 Cannes Film Festival, went location- hunting in the province recently. “All I can say right now is that he will make a road movie.”

The governor is gung ho about promoting Ilocos Norte as a location for TV tapings as well, and movie and advertising shoots.

Marcos said that Provincial Ordinance No. 2011-09-062, known as the “Trimedia Incentives Act in Ilocos Norte,” aims to “grant discounts on all permit fees and location charges issued by the provincial government as well as provide assistance in facilitating ground arrangements and technical information.”

In a nutshell, the law seeks to make life easier for filmmakers and producers intending to shoot in Ilocos Norte. Marcos acknowledged that these trimedia productions make valuable contributions to the local economy by providing employment opportunities in transportation, accommodation, catering, and rental revenues.

“The provincial government will match these expenses,” Marcos said.

After the live action animation indie “Pintakasi,” Marcos is contemplating on producing a film set in Ilocos with Soxie Topacio as director: “We found a script by Bienvenido ‘Boy’ Noriega Jr., ‘Kasalan sa Likod ng Simbahan.’ Soxie made ‘Ded na Si Lolo,’ which tackled funeral traditions. We have distinct customs in our courtship rituals and weddings.”