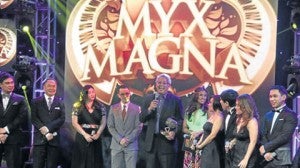 The stage glittered with sequins, neon garb, and bell-bottomed disco pants in the 1970s-themed Myx Music Awards held recently at the Music Museum. In their funky ensembles, the night’s performers brought to the audience the enduring music of the decade considered by many as one of the best, if not the best era of Filipino music.

“When you look back to the ’60s, halos wala kayong mapi-pinpoint na top Filipino pop music. Of course Victor Wood, Eddie Peregrina and Nora Aunor were there, but most of them only did revivals. It was in the ’70s when Filipino music really kicked off,” composer Ryan Cayabyab told the Inquirer.

“Gusto kong ipagmayabang na ang ’70s was a golden age in our music,” he said. “There were so many big hits from the likes of Hotdog and Apo Hiking Society. There were the songs of George Canseco and Willie Cruz. Also, a lot of solo artists used original Filipino songs.”

For the 57-year-old “maestro,” the closest we got in replicating the creative glory and originality of the ’70s came in the late ’90s, when the Eraserheads were at their peak, and led the surging pack of alternative rock bands.

Since then, the industry has been beset by media piracy, and the lack of original compositions. Will we ever see another golden age in our music? The ever positive Cayabyab feels that things are on their way up; that artists, young and old, are looking for new ways of expressing themselves, and trying to shape an innovative kind of sound.

“For example, si Ebe (Dancel) nag-solo na, so meron na siyang ibang expression. A while ago I saw people get very excited over Zia (Quizon). I am excited as well, because the first time I heard her voice, wow kakaiba! People will always look for—something new and different,” he said.

“I remain forever hopeful, because you never know,” he added.

Although there is still a long way to go before the industry reaches a new high, Cayabyab believes that there is still plenty to celebrate right now: the growing number of emerging songwriters, and technology leveling the playing field for anyone wanting to make their mark in the music industry.

To sustain whatever promise there is on the OPM landscape, Cayabyab wants to continue discovering and teaching young talents through his mentorship in 7101 Music Nation’s Elements songwriting camp. He is also the executive director of the PhilPop Music Festival—a songwriting competition that aims to serve as a cradle for new and original material.

“Everybody is tired of hearing covers. We hope to get back to making original music that not only sounds great, but is also very different,” he said.

Getting high with music

One of the highlights of the night was the groovy mishmash of the ’70s hits “Dahil Mahal Kita,” “Pag Tumatagal Lalong Tumitibay,” “Tuloy Pa Rin,” “Awitin Mo At Isasayaw Ko,” and “Sumayaw Sumunod,” delivered by no less than the ’70s Superband.

As the giant disco ball bathed the venue with a flurry of lights, ’70s Superband members Snaffu Rigor (formerly of Cinderella), Nonoy Tan (Wadab), and Mon Espia (Labuyo) regaled the crowd with a rendition of the famed Manila Sound.

“Ganito pala maging high nang hindi humihithit at ’di umiinom!” Cayabyab jested to rousing applause. “You can get so high with music. I had forgotten how much until now!”

Meanwhile, the Favorite Music Video award, the last one handed that night, went to Pupil for the song “20/20.”

The winners were determined by 60 percent viewers’ text and online votes, and 40 percent artists’ votes.